The one-month treasury yield rose to 2.0% yesterday at the close and is at about the same level today, the highest since June 10, 2008. It is starting to price in a rate-hike at the Fed’s September 25-26 meeting. This rate hike, the Fed’s third this year, would bring its target to a range between 2.0% and 2.25%.

The three-month yield, currently at 2.14%, has reached the highest level since February 26, 2008. Back then, as the Financial Crisis was taking its toll, yields were going through enormous volatility, as the chart below shows. During that volatile period in mid-2008, the three-month yield spiked for a day to 2.07% on June 16, but never got back to the 2.14% in February that year: 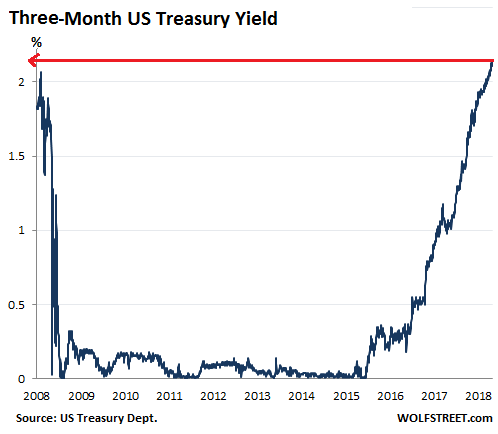 It hasn’t been exactly a whirlwind rate-hike cycle with one-percentage-point rate hikes per meeting, à la Paul Volcker in the early 1980s, but in their “gradual” – as the Fed never tires to point out – easy-to-digest, no-surprises manner, the rate hikes are starting to add up. There is an entire generation working in the finance industry and on Wall Street who has never seen Treasury yields this high. They’re in for a learning experience. 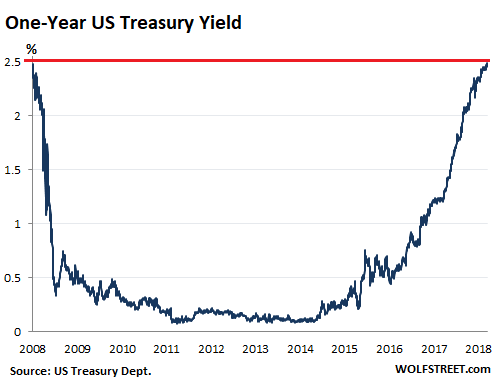 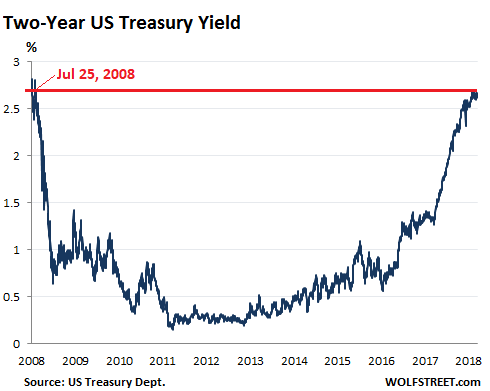 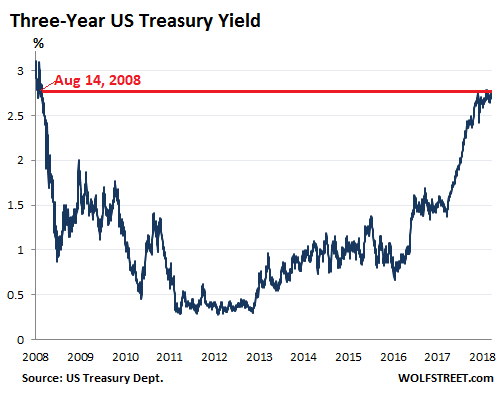 All US Treasury yields through three-year maturities are now at 10-year highs. But the yields of Treasuries with maturities longer than three years still have not reached 10-year highs.  For example, the five-year yield at 2.77% today is still way below the 4.16% on September 5, 2008.

The 10-year yield has risen as well so far this week. It closed at 2.90% yesterday and trades at the same level at the moment. On September 5, 2008, the 10-year yield was 3.66%. So it will take a while before it hits a 10-year high. But note the two surges in this rate-hike cycle, each took the 10-year yield up by over one percentage point. The 10-year tends to move in these surges. And in this scenario, “surge 3” would push it over the 10-year high: 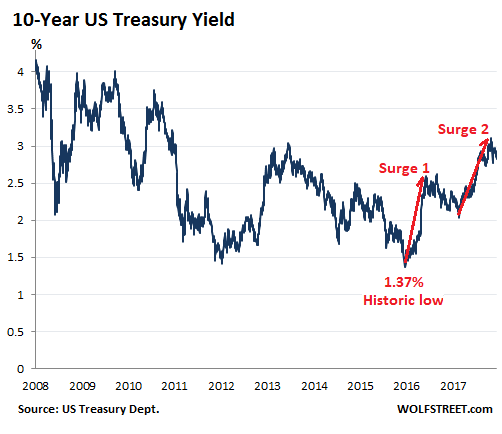 The yield curve has been on “inversion” watch since last year, where long-term yields would be lower than short-term yields – a phenomenon that in the past has been followed by a recession or worse. In recent days, the yield curve has steepened a tiny bit, and everyone is expelling an equally tiny sigh of relief. In that spirit, the spread between the two-year yield and the 10-year yield widened to 24 basis points, a smidgen off the 18-basis-point spread on August 27, a low not seen since before the Financial Crisis: 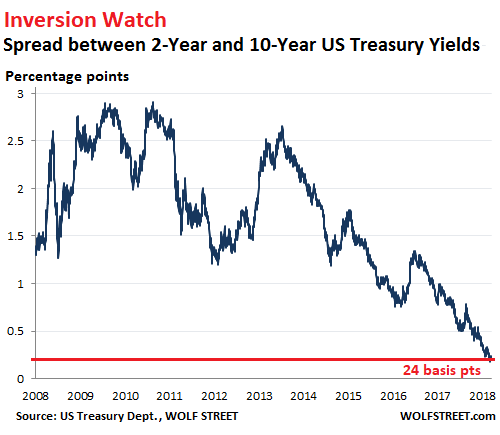 Five economists at the Fed’s Board of Governors published research results that encourage the Fed not to wait on tackling inflation because, in the current dynamics, “outsized deviations of inflation from its target are a plausible outcome.” Read…  Fed Economists Deliver Ammo for Hawkish Approach to Inflation

53 comments for “These “Gradual” Rate Hikes Start to Add Up: US Treasury Yields up to Three Years Hit 10-Year Highs”