With Covid-19 cases surging in the US and in other countries, airline industry ticket sales for both domestic and international flights are declining again, as demand has turned south, according to a presentation to employees by United Airlines, filed with the SEC on July 7.

UA’s presentation included the two charts below of new ticket sales for future travel, by “all carriers and sales channels,” based on data by Direct Data Solutions (DDS) through July 2. They show the percentage decline in industry-wide ticket sales for domestic and international travel from the same period last year (in a 7-day moving average). The charts are titled, “Increase in Covid-19 cases negatively impacting industry demand”:

The first chart shows the decline in ticket sales for domestic flights, in terms of the number of passengers (blue line) and dollar revenues by the industry (purple line): 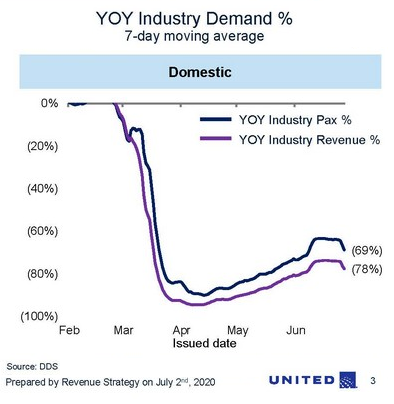 This second chart shows the decline in international ticket sales in terms of the number of passengers: 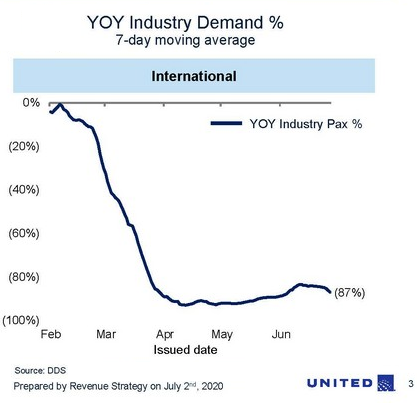 So that’s the end of any pretense of a “V-shaped” recovery of ticket sales. And it’s likely that not just airlines are impacted by this resurgence in Covid-19 cases. But airlines are already teetering on the edge.

Today, United Airlines announced that 36,000 employees in the US, or 45% of its US workforce, could face “involuntary furloughs” on or after October 1. That’s the day after the restrictions attached to the $25 billion in payroll aid under the CARES act expire.

United’s memo of the layoffs went out to employees in order to comply with a federal law that requires employers to give employees at least 60 days’ prior warning before mass layoffs, the so-called WARN notices.

The “involuntary furloughs” would include up to 15,000 flight attendants, 11,000 customer service and gate agents, 5,500 maintenance workers, and 2,250 pilots. Another 1,300 management and support staff will be laid off on October 1, the company said.

“The reality is that United simply cannot continue at our current payroll level past October 1 in an environment where travel demand is so depressed. And involuntary furloughs come as a last resort, after months of company-wide cost-cutting and capital-raising,” the company said.

Delta Airlines told pilots in late June that it would send WARN notices to 2,558 pilots, or nearly 20% of its pilots, notifying them of potential furloughs. Last week, Delta said that it may cut the number of flights it had scheduled for August due to lack of demand. A month ago, Delta issued the mother or all revenue warnings.

All airlines have been trying to cut their workforce with voluntary measures and have been offering severance packages and early retirement packages to nudge employees out the door without having to lay them off. Over the next few weeks, as the 60-day period before October 1 approaches, more airlines will follow United in announcing mass layoffs.

The drama of the dropping ticket sales due to the Covid-19 resurgence is not yet reflected in the TSA’s checkpoint screenings at US airports – a measure of how many people are getting on a plane. They were still down 74.4% yesterday, compared to the same weekday last year. They have risen since the low point in April, but at a painfully slow pace.

The TSA checkpoint screenings are a lagging indicator. These people bought their tickets often weeks or months ago. The declining ticket purchases in recent days will be reflected in future TSA screenings: 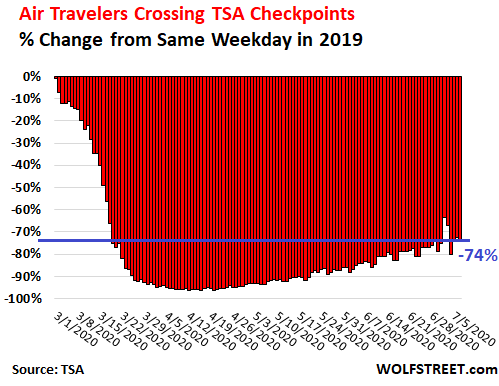 Four months into the crisis, airlines are still only flying a quarter of the passengers that they flew last year at this time, and they’re having trouble hanging on.

United told reporters today that despite the radical cost cuts and capacity reductions, it is still burning $40 million per day. That’s $1.2 billion a month, month after month. And it said that it could not count on further government support to cover payroll costs from October 1 forward. The company said that 26,000 employees had already taken part in the voluntary severance programs so far this year.

The V-shaped recovery of airline stocks is also funny looking. The WOLF STREET airline index of the seven largest US airlines – Alaska, American, Delta, JetBlue, Southwest, Spirit, and United – remains in dismal territory, down 49% from the Good Times in mid-January 2020, and down 60% from the Better Times in January 2018 (market cap data via YCharts): 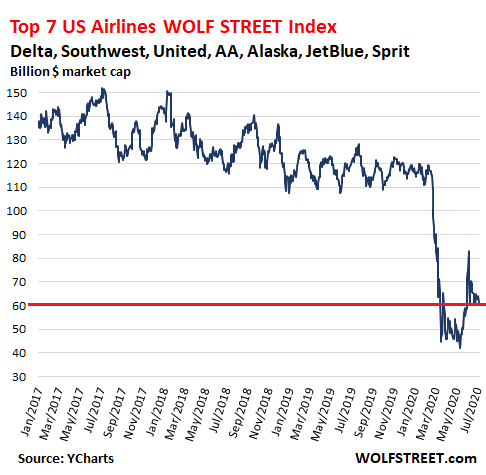 The market cap of all seven airlines has plunged since mid-January, but with different nuances, as of the close today:

It’s going to be a long tough slog for passenger traffic to recover. In addition to the issues related to the Pandemic, there is now a structural issue: Business travelers, the most profitable segment for airlines, may not fully recover in a very long time because companies have now discovered that video conferencing and video chats can effectively replace many trips. Sure, there will be some business travel after the Pandemic disappears as an issue, but a lot less than there was before. This is a huge savings in time and money for companies. But it’s a deep long-term hole for airlines.