“Everybody’s drinking beer as if there were no tomorrow, but my bar can barely survive off beer sales alone,” says Yahya, owner of one of my favorite bars.

Tourists from the EU’s Schengen countries could begin arriving in Spain from June 21 and Spain’s borders were officially opened on July 1. Since then, international visitors have begun returning, in drips and drabs. Most people are loath to fly or travel far from home, in case there are fresh outbreaks or new lockdowns. To compound matters, people from over 100 non-European countries are still banned from traveling to the EU.

In Barcelona, the streets and plazas are still eerily quiet. On Friday, my wife, mother-in-law, and I had dinner on a friend’s roof terrace overlooking the mid-section of the Ramblas where the Miró painting is — the exact spot where the truck that mowed down scores of pedestrians in the August 2017 terrorist attack finally stopped. When we arrived, at 8:30, the iconic street, which is normally heaving with tourists, was quieter than normal. By midnight (as you can see in the photo below), it was almost empty. An hour later, as we flagged down a taxi to take us home, there were more beer vendors, prostitutes, drug dealers and pickpockets lining the street than there were punters. 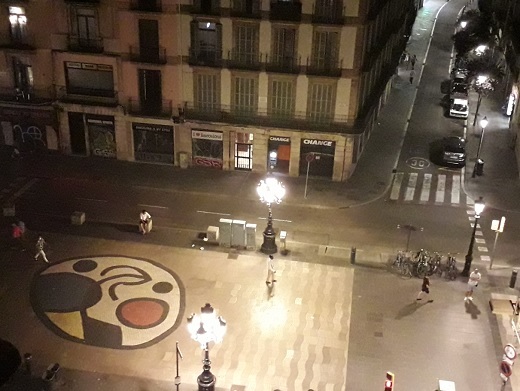 In a July 3 article, Der Spiegel described Majorca as a “ghost island.” Long accustomed to being swamped by German, British and other European tourists in the hot summer months, the island is an “oasis of calm”, the article says. It’s a “long awaited dream for some” and “a nightmare for others.”

It was a stark reminder of just how punishing a reality the so-called “New Normal” is for those who carve out a living in the informal economy. But it’s not that much better in the formal economy. Just 60 of Barcelona’s 440 hotels are open with occupancy between 15% and 20%, compared to over 80% in a normal July.

In 2019, Spain received a record 83.7 million international visitors. This year, according to Expansión, Spain will be lucky to receive 30 million.

In a delicious irony, many Airbnb hosts are desperately trying to rent out their over-priced tourist apartments or rooms to the same local residents they’ve been helping to price out of the market for the last few years. They’re not having much success. In most cases, the rents on offer are insanely high.

In one particularly egregious case, a six square-meter windowless bedroom was initially offered to rent for over €2,000. When there were no takers, the price was dropped to €1,300. Still no takers. It’s now being offered at €650, which is still insultingly high for what you get.

In the absence of tourists, most bars, restaurants and cafes are operating at around 50% capacity. Twenty percent of bars in Spain have still not reopened.

“I’m doing twice as much work for half the takings,” says Yahya, the owner of one of my favorite local bars. He has four workers on the payroll but only one of them is currently working — and that’s just part time. Yahya’s doing all the rest, which he says he doesn’t mind: he’s used to working long days. Food sales are down 70% compared to last year, but alcohol sales are picking up some of the slack.

“Everybody’s drinking beer as if there were no tomorrow but my bar can barely survive off beer sales alone,” especially as the financial pressures keep building, Yahya says.

“Most of my providers don’t want to sell on credit anymore, which is understandable; they have no way of knowing if or when they’ll get paid. But it doesn’t make my life any easier. I just paid four months of rent — for the price of three, thankfully,” he says. “And two quarters’ worth of taxes just came due.”

The problem is not just that there are fewer tourists; it’s that there are fewer big-spending tourists. As El País reports, since the EU “reopened” its borders two weeks ago, the list of nationalities allowed into the Schengen space has plunged to 15, from 105 before the pandemic. Among the nations left off the list are the United States, China, Russia, the Gulf States and most countries in Latin America — which together account for the vast majority of profligate visitors that keep (or kept) the luxury stores of Barcelona, Madrid and Marbella in business.

“The United States, Russia, Argentina and Mexico are of utmost importance because they are the tourists who spend the most,” says José Luis Zoreda, the vice-president of the tourism lobby Exceltur. In Catalonia, tourists from the US spend more than visitors from any other country.

Whether big or small, companies that have grown to depend on tourism are currently engaged in an existential struggle. This being the European Union, where up to 11% of the collected GDP derives directly from tourism (in Spain it’s 15%), compared to 2.6% in the U.S., the broader impact is likely to be brutal. The OECD has warned that in the most tourism-dependent regions of Southern Europe, from the Canary and Balearic Islands to the Algarve and Crete, unemployment could soon reach 40%.

Big companies, like Globalia — which owns airline Air Europa, travel agency Halcones Viajes, and hotel chain Be Live, all of which have been closed or operating well below capacity for four months — have the ear of ministers, presidents, and central bankers. For them, the impact can be softened with cheap or free bailout money. For small operators that depend for part or all of their business on tourists, it’s a different story. By Nick Corbishley, for WOLF STREET.