Torrent of 2.4 million new claims under state & federal programs this week. PUA claims by gig workers now 45% of 32 million in total unemployment. Many people are hired back, but many people are newly laid off. Labor market recovery remains hard to discern.

The torrent of newly laid-off workers keeps flowing into state unemployment offices to claim unemployment at an astounding rate week after week. But many people who were claiming unemployment benefits in prior weeks were called back to work, or found new work. And the total number of people who continued to claim unemployment compensation in the week ended July 11 under all state and federal unemployment insurance programs, including gig workers and contract workers, dipped by 433,000 to 32.0 million (not seasonally adjusted), according to the Department of Labor this morning. It was the second highest level ever, after last week’s gut-wrenching record.

Over the past five weeks, these initial state unemployment claims totaled 7.25 million, for an average of 1.45 million per week, which shows how relentlessly companies have shed workers week after week.

Early on in the crisis, it became clear that the seasonal adjustments were not designed for this huge explosion in unemployment, and caused the “seasonally adjusted” initial claims to be over-reported by the millions. This is when I started reporting only “not seasonally adjusted” unemployment data – and this is what you’re seeing here, the unadjusted data. 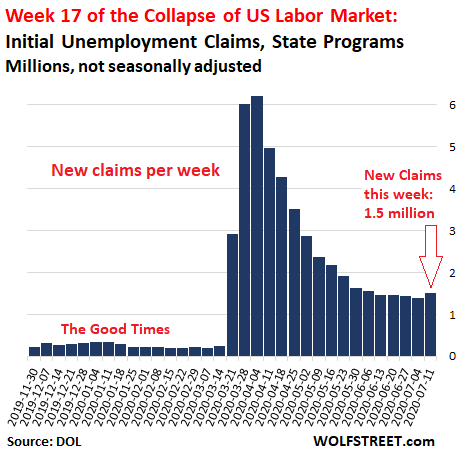 These 1.5 million people who just lost their jobs and filed their initial unemployment claims represent the new inflow into the pool of the unemployed under state unemployment programs.

But millions of people who had been laid off in prior weeks and who had already claimed state unemployment insurance have gotten their jobs back, or found new jobs. And those people represent the outflow of the pool of the unemployed.

In recent weeks, this outflow was higher than the weekly inflow, and the number of people continuing to receive state unemployment insurance, the “insured unemployed” under state programs, declined.

But this week, the number of the insured unemployed rose to 17.4 million, the first weekly increase since mid-May (the blue columns in the first chart above).

Pandemic Unemployment Assistance (PUA), which covers contract workers and self-employed – the “gig workers” – which includes everyone from rideshare drivers to tech specialists working on a contract basis: 928,488 initial claims were processed by 48 states in the week ending July 11. This is the weekly inflow into the mass of gig workers who lost their work and are claiming benefits under this program.

Two states – New Hampshire and West Virginia – still have not figured out how to process these PUA claims.

State and federal new claims combined: 1.5 million initial state claims plus 928,488 PUA claims amount to an inflow of 2.4 million into the pool of the unemployed for the week!

Pandemic Emergency Unemployment Compensation (PEUC), covers people who don’t qualify for regular state unemployment insurance or for PUA: 936,431 people continue to receive benefits under this program. Nine states still have not yet processed any PEUC claims.

The unprecedented surge of millions of people who suddenly lost their work and continue to lose their work came together with a slew of new programs that Congress enacted to support workers that would not normally qualify for state unemployment insurance.

Some of the laid-off people were told they were on temporary furlough and would be hired back, maybe. Others were just let go. Gig workers were suddenly covered for the first time, and that threw everything off. States were overwhelmed and fell way behind in processing these claims. State unemployment offices had difficulties implementing the new federal programs – and some appear to still not have caught up. So there are additional claims that will come forward in the future that should have been processed weeks ago, and they understate the current numbers.

But data chaos goes in both directions. Some fraud was discovered, and at the time, these claims overstated the totals. But those that were discovered were then removed from the system. There may be duplications and other sources of error that would contribute to overstating the current numbers.

The Bureau of Labor Statistics, which reports the monthly jobs numbers on the first Friday each month, is working off surveys of households and employers, rather than actual unemployment claims. It has acknowledged a number of systematic errors in its system – including confusion over how to answer basic questions – so that its conclusions about jobs and employment have become useless.

Exactly how many people are still out of a job or out of work remains in the eye of the beholder. But with 32 million people still receiving unemployment compensation under state and federal programs, the second highest number ever, after last week’s record, shows that the situation remains catastrophic.

There is no recovery for office space. The number of people going to the office has declined over the past four weeks. Read… Work-from-Home & Covid Resurgence Maul Office Occupancy