Was June as Good as It’s Going to Get in the Pandemic Era?

Automakers have been reopening their assembly plants in the US, hobbled by setbacks, including supply chain issues. Other manufacturers too have reopened their plants. Housing construction is moving forward. Other construction segments are weaker. Oil-and-gas drilling – a vast industry in the US with big impact on equipment manufacturing, construction, real estate, technology, transportation, etc. – is melting down, with big bankruptcies happening now densely together. California Resources, the largest driller in California, filed for bankruptcy on Wednesday, following Chesapeake at the end of June. Ecommerce retail is booming, but brick-and-mortar retail in malls is in a death spiral. So in terms of the goods-based sectors, it’s a very mixed bag. And the freight industry tracks those sectors because all these goods must be shipped.

In June, shipment volume by truck, rail, and air in the US ticked up from April and May but was still down by 17.8% from June 2019, and by 22% from June 2018, according to the Cass Freight Index for Shipments. The year 2018 had been the Good Times for the industry. The year 2019 was crappy and got worse as it went on. In the year 2020, all heck broke loose when the Pandemic hit the industry that was already grappling with sagging demand. June was the 19th month in a row of year-over-year declines in shipment volume: 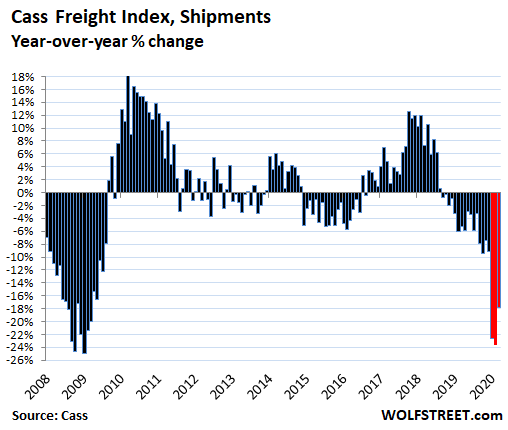 The Cass Freight Index tracks the shipment volume by all modes of transportation, but is more concentrated on trucking. It tracks shipments of products for consumers and industrial users, but not bulk commodities, such as grains, coal, or petroleum products.

The year-over-year plunges of the index in April and May had been the worst since January and April 2009, which had been the worst in the data series going back to 1990. June was simply less bad. So “don’t call it a comeback,” says Cass in the report. 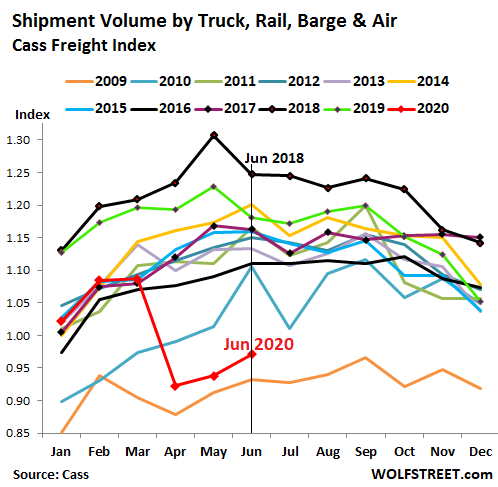 Rail traffic digging out from a deep hole

Rail traffic in June was still 14.3% below June last year, according to the Association of American Railroads, but that’s an improvement over the 20.2% year-over-year plunge in May and the 21.2% plunge in April. Of the two categories, carloads were down 22.4%, and container and trailer loads (“intermodal”) were down 6.6%.

Carloads of coal plunged 34.1% year-over-year, continuing its relentless decline that started years ago and was made worse by the Pandemic.

Carloads of crushed stone, sand, and gravel, which includes frac sand for shale-oil-and-gas drillers, plunged 27.1% year-over-year. This is another angle on the melt-down in the oil-and-gas sector. Frac-sand supplier Hi-Crush filed for bankruptcy on July 12.

But the auto assembly plants had reopened and needed components; and they began shipping new vehicles to dealers across the country. For the month of June, carloads of motor vehicles and parts were still down 30.2% year-over-year. But at the beginning of June, railroads were running only about 2,000 carloads of vehicles and parts. By the last week in June, that was up to 13,392 carloads – still down 27.2% from the same week last year, but better than near-nothing in May.

Shipments of other products that go into auto manufacturing, such as metals, glass, and plastics, had also bottomed out in May, with carloads starting to tick up in June.

Intermodal volume improved more significantly, and in the last week of June was down only 5.1% from a year earlier.

Average spot rates for dry van trailers in June – after a tough April and May for truckers – rose to $1.81 per mile, excluding fuel surcharges, up from $1.60 in May, according to DAT.

But those gains might come under pressure going forward, due to the new outbreaks of Covid-19, according to a blog post by DAT, which sees an “uneven” freight recovery “as some regions are forced to slow down reopening plans and consider more lockdowns,” while other regions “are seeing more economic activity return, like New York, Massachusetts and Connecticut.”

There are now signs that “dry van rates may have peaked and could drop back, as demand decreases across the board along with the re-closures in California and scaling back of reopening plans in Texas, Florida and Arizona,” DAT’s blog post said.

It cited Geotab daily commercial truck trip data that had peaked on June 25, “the only time capacity has been at or near pre-COVID-19 levels,” but then the daily trips began to decline again. By last week, compared to the pre-Covid February baseline, daily trips were already down 10%, which took them back to the May 18 level.

So, was late June as good as it’s going to get in the Pandemic era? The decline in daily truck trips is one more indication that the recovery is going to be “uneven,” as DAT had put it, and a drawn-out process with many ups and downs, and not at all straightforward.

Torrent of 2.4 million people filed their initial unemployment claims under state & federal programs during the week. PUA claims by gig workers now 45% of total unemployment claims. Many people are hired back, but many are newly laid off. Labor market recovery remains hard to discern. Read… 32 Million People on State & Federal Unemployment, 2nd Highest Ever: Week 17 of U.S. Labor Market Collapse