Four of the six hotels that hotel-REIT Park Hotels & Resorts owns in San Francisco are still closed as convention and business travel remains at near-zero.

Two Hilton hotel properties in San Francisco – the Hilton San Francisco Union Square, the Bay Area’s largest hotel with 1,921 rooms, and the Hilton Parc 55, both in the Union Square area – owned by hotel-REIT, Park Hotels & Resorts [PK], have now been added to the huge pile of hotel properties seeking relief on their mortgages that have been packaged into mortgage-backed securities (CMBS). Both hotels are still closed, though some other hotels in San Francisco have reopened.

Tourism remains a small fraction of its former glory. Leisure tourism, which has come back a smidgen from near zero, is only part of the problem for these hotels.

Convention tourism is a huge factor in San Francisco, and all in-person conventions and meetings have been cancelled or converted to virtual events, including at the vast Moscone Convention Center. People on expense accounts are not coming to the City to go to conventions. And the Hilton San Francisco Union Square is the City’s largest convention hotel, with 134,500 square feet of meeting space, ballrooms, and meeting rooms.

When mortgages that were packaged into CMBS get in some sort of trouble and borrowers ask the loan servicer for relief, they’re added to the servicing watch list, and these two properties were now added to that watch list, according to the San Francisco Business Times. The mortgage backed by the two Hilton properties is still current, but the borrower, Park Hotels & Resorts, has asked the servicer, Wells Fargo, for relief.

This Special Servicing rate for hotel properties spiked to a record of 26.0% at the end of September, according to Trepp, in its October report on CMBS.

But the delinquency rate of hotel properties ticked down, to a still astronomical 22.9%, as some delinquencies were “cured” because the delinquent loans were granted forbearance, and were therefore no longer considered delinquent, though no payments needed to be made. But the loans that have been granted forbearance continue to stay on the Special Servicing list, and the Special Servicing rate shows a more accurate picture of the state of the hotel property loans: 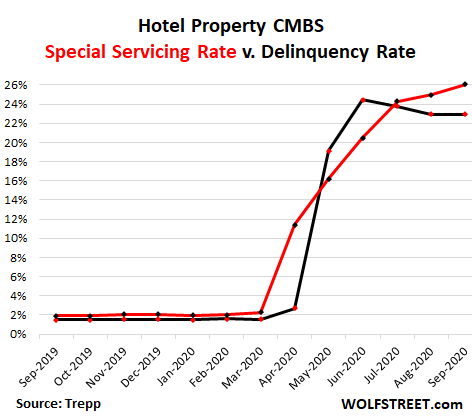 The CMBS Special Servicing rate of hotel properties has relentlessly increased every month since March, unlike the delinquency rate, which has edge down for the past three months largely due to forbearance being granted to delinquent loans.

The two Hilton properties in San Francisco that have now been added to the watch list are backing a $724 million loan, taken out by Park Hotels & Resorts Group, according to the San Francisco Business Times. Back in 2016, when the mortgage was packaged into the CMBS, the property of the Hilton San Francisco Union Square was valued at $1.02 billion and the Hilton Parc 55 at $540 million.

When the mortgage is sent to special servicing, it will be reappraised, under current conditions. According to a report by Wells Fargo, reappraisals of hotel properties have been brutal. For example, a Crowne Plaza hotel property in Houston was reappraised 46% lower than its appraisal in 2014 when the loan was packaged into a CMBS. The Holiday Inn La Mirada in Los Angeles was marked down by 27% from its 2015 appraisal. The Holiday Inn in Columbia, Tennessee, was marked down by 37%. That’s the range or current hotel markdowns: -25% to -50%.

Park Hotels & Resorts was spun off by Hilton Worldwide Holdings [HLT] in early January 2017, and started trading on the NYSE. Park Hotels lists 60 hotel properties in the US, including six hotels in San Francisco (two Hiltons, a Hyatt, a JW Marriott, a Le Meridien by Marriott, and the Adagio by Marriott). Four of these six are still closed. 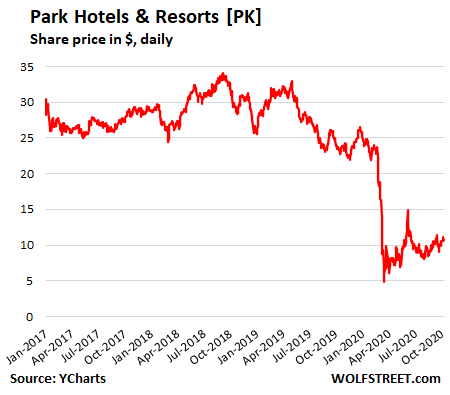 Wells Fargo, the servicer of the mortgage backed by the two Hilton properties, has already agreed to provide relief to Park Hotels. It granted a six-month deferral of regular contributions to the fund for upgrades to furniture and equipment. This contribution typically amounts to 4% of revenues at Park Hotels, according to the Business Times. Instead, the borrower is using these funds to service the mortgage in order to keep it current. Wells Fargo also waived obligations for a debt yield test through the end of next June, according to the Business Times.

While there has been some uptick in leisure tourism in cities – and a surge in tourism near National Parks, state parks, and other wonders away from the cities – the convention tourism along with business travel in general remains in collapse mode.

These travelers on expense accounts used to be a lucrative part of the lodging business. Now they’re gone. A considerable portion may be permanent, even after the health crisis is more or less resolved. Companies have discovered over the past seven months that its employees and executives can in many instances accomplish the same thing virtually, while staying at work rather than wasting time gallivanting around the globe, and thereby saved the company a lot of money. Cost cutting is always a top priority. But one company’s costs are another company’s revenues – and hotels and airlines are catching the brunt of that shift.