A total mind-blower. Actual prices skyrocket even as CPI for new vehicles has been flat for 22 years.

I started stirring the pot a few weeks ago with the Toyota Camry, the best-selling car in the US. I compared Camry LE prices for the model years from 1990 through 2020 (now in showrooms) and found that the base MSRP increased by 70% while the CPI for new vehicles increased by only 22%, and more disturbingly, that this 22% increase happened entirely between 1990 and 1997, and that since then, the CPI for new vehicles has been flat with a dip in between. Now I’m going to do the same analysis with the best-selling vehicle of all times in the US, the Ford F-150 pickup truck. And you know what is coming: a total mind-blower.

But that hardly explains the enormously billowing price of the F-150, which totally blew past the Camry’s price increases.

Americans have fallen in love with “trucks” in all forms: pickups, SUVs, car-like compact SUVs, and vans. Since 2014, “truck” sales have soared 44%, while car sales have collapsed 40%, a phenomenon I have come to call Carmageddon (my chart of Carmageddon). This shows up in the price gains of the F-150, which totally blow away the price gains of the Camry, which in turn totally blow away the CPI for new vehicles.

The stunning price increases of the F-150 XLT.

The MSRP (manufacturer’s suggested retail price) for the 2020 F-150, now in showrooms, ranges from $28,495 for an XL to… well, I had some fun and specced out a mean piece of equipment on Ford’s website, a 2020 F-150 Limited SuperCrew Cab (4-door) 4X4 with the EcoBoost High Output Engine, electronic 10-speed automatic transmission, and all the bells and whistles I could stick on it. It came to $76,935 MSRP.

There has always been a huge price range between the base version of the F-150 and the top end. Back in the early 1990s, there was the stripped-down “S,” now extinct, plus the XL that still exists, the XLT, which has been the most commonly sold model, plus various high-end versions. For this study, I will stick with the XLT.

Let that sink in for a moment. Over the same period, the CPI for new vehicles (green line, right scale in the chart below) rose just 22%: 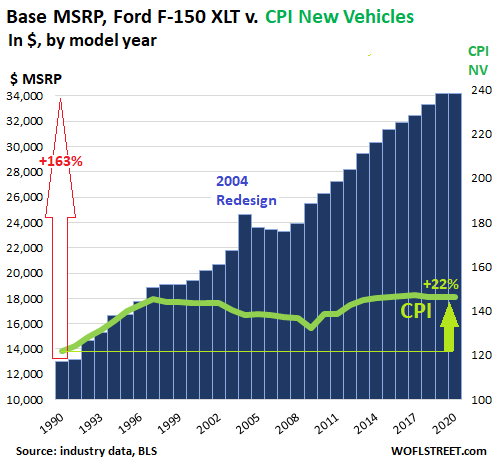 Note that from 1990 through 1998, the CPI for new vehicles closely tracked the price increases of the F-150. But this surge in CPI was too disturbing, apparently, and so the CPI methodology was enhanced with aggressive hedonic quality adjustments and other methods to bring CPI down, and it actually fell from 1997 through 2009, even as new vehicle prices were soaring.

Also note the 12.8% jump from the 2003 model to the 2004 model. This was the year of a redesign – “exciting” engine options, “bigger and bolder” exterior, “refined” interior, offering “a revolutionary level of comfort and spaciousness that was unparalleled in a pickup truck,” the Ford enthusiasts at Blue Oval Tech gushed at the time:

Ford thought it could get away with jacking up the base price by nearly 13% — only to end up backing down over the next few years. The MSRP didn’t get back to that price level until 2009. Big price increases following a redesign are common, as is the failure to make them stick in the following years. But this up-and-down was extreme. 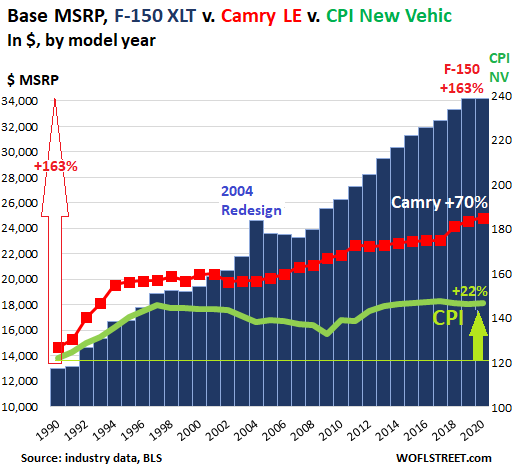 The theory is that CPI should only track the monetary phenomenon of inflation – the dollar losing purchasing power – when it takes more dollars to buy the same good or service over time. When a truck gets more expensive because it gets bigger and more powerful and safer and more comfortable and what not, the costs of those goodies are not inflation. They’re improvements. So they’re removed from the CPI via these “hedonic quality adjustments.”

And there have been countless “improvements” in safety, performance, comfort, convenience, etc.:

The additional costs of these quality improvements are estimated and removed from the CPI for new vehicles over time.

The Camry too has undergone major redesigns, most recently for the 2018 model year, and it too benefited from myriad improvements in performance, safety, comfort, convenience, etc. Why did its price rise 70% since 1990 compared to 163% for the F-150?

It boils down to this: Americans are in love with trucks and are willing to pay more – a lot more – for pickups than for cars; and this willingness has grown in recent years. This has led to the phenomenon where profit margins for automakers are huge on pickups but slim on cars.

Ford proudly points this out at every earnings call, as it emphasizes how it’s selling ever more high-profit-margin “trucks.” Other automakers are doing the same thing. And this willingness by normally astute American consumers to pay so much for trucks and allow the manufacturer to make such fat profit margins is fairly rare for a mass-produced high-volume item (the iPhone is another example).

When you squint just right at this phenomenon after the costs of the quality improvements have been removed, it looks suspiciously like a big dose of inflation in a special part of the US economy – truck sales – where consumers willingly or even eagerly submit to it even as they fight inflation in other products by switching when the price goes up, thus forcing the seller to back off. But not with trucks apparently.