The freight rates from Asia to the US West Coast and East Coast, and to Europe, have exploded since the stimulus economy kicked in, where consumers shifted spending from services – such as airline tickets, haircuts, and even rents under the eviction bans – to goods, powered by money from the stimulus and from refinancing their mortgages at lower rates.

The average spot rate that container carriers charge for shipping containers from Shanghai to the US East Coast shot to a new record of $4,874 per FEU (Forty-foot-Equivalent Unit), a standard measuring unit in the shipping industry. The average spot rate from Shanghai to the US West Coast, after hitting a record of $3,948 per FEU in the prior week, dipped a smidgen to $3,900 last week, according to the Shanghai Containerized Freight Index (SCFI). For all 13 major global routes that the SCFI tracks, the overall index as of December 18 rose to a record reading of 2,412, up roughly 165% from a year ago.

These distortions have created a global chain reaction that includes a shortage of empty containers in the US that has hammered farmers that grow crops for exports, but have trouble finding enough containers to ship their crops. The resulting uproar has caused the US Federal Maritime Commission to investigate container carriers, amid allegations they are violating the US Shipping Act of 1984 (chart via Shanghai Shipping Exchange):

At the same time, freight rates for shipping containers from the US West Coast to North Asia are languishing at $600 per FEU, according to Platts Container Rates. And that is part of the calculus that container carriers undertake in deciding what to do with the empty containers.

The US Federal Maritime Commission (FMC) has initiated an investigation of ocean container carriers, amid allegations that they are sending empty containers directly from US ports to Asian ports to profit from the juicy east-bound freight rates, rather than making the empty containers available to US agricultural exporters, thus shutting US farmers out of their global markets.

The FMC said in a press release on November 20 that it would “investigate ocean carriers operating in alliances and calling the Port of Long Beach, the Port of Los Angeles, or the Port of New York and New Jersey” in order “to determine if the policies and practices of those shipping companies related to detention and demurrage, container return, and container availability for U.S. export cargoes violate 46 U.S.C. 41102(c).”

“The Commission is concerned that certain practices of ocean carriers and their marine terminals may be amplifying the negative effect of bottlenecks at these ports and may be contrary to provisions in the Shipping Act of 1984,” the FMC said.

“The potentially unreasonable practices of carriers and marine terminals regarding container return, export containers, and demurrage and detention charges in the Ports of Los Angeles, Long Beach, and New York/New Jersey present a serious risk to the ability of the United States to handle trade growth,” the FMC said.

Then on December 8, FMC chairman Michael Khouri, speaking at the Global Maritime Conference, said: “Some ocean carriers – not all – have stated that they will no longer deploy – that is – reposition empty containers to the US interior agricultural areas. Instead, they are expediting empties back to Asia.”

“This abandonment of a significant U.S. export industry – the American agricultural industry – is shutting them out of global markets,” he said.

“We are looking into all potential – I repeat – all potential responsive actions, including a review of whether such ocean carriers’ actions are in full compliance with the Shipping Act and more specifically the various ‘Prohibited Acts’ sections of the Act,” he said.

Then on December 17, the FMC admonished World Shipping Council CEO John Butler: “We are writing to express our growing concern about reports that ocean carriers are refusing the carriage of U.S. exports”; and that “it is of great concern, if true, that focus on the delivery of surge import cargoes works to the detriment of U.S. exporters.”

The letter cited the Shipping Act of 1984, section 41104(a)(10), which states that common carriers may not “unreasonably refuse to deal or negotiate.” And it cited section 41105 which states that two or more common carriers may not “boycott or take any other concerted action resulting in an unreasonable refusal to deal;” or “engage in conduct that unreasonably restricts the use of intermodal services….”

The FMC investigation and messaging are in response to the uproar among American farmers, their lobbying groups, and their Representatives in Congress, over the sudden disappearance of empties, and denied or cancelled bookings.

Agriculture Transportation Coalition (AGTC) executive director Peter Friedmann, in commenting on the FMC’s decision in November to investigate the carriers, said that the members of his organization “have continuously provided information on carrier and terminals practices, which has greatly served to inform the Commissioners.”

At the core of the container shortage is the demand for goods created by the distortions of the Weirdest Economy Ever where US consumers have sharply reduced spending on services but have purchased a record amount of goods, including a breath-taking amount of durable goods: 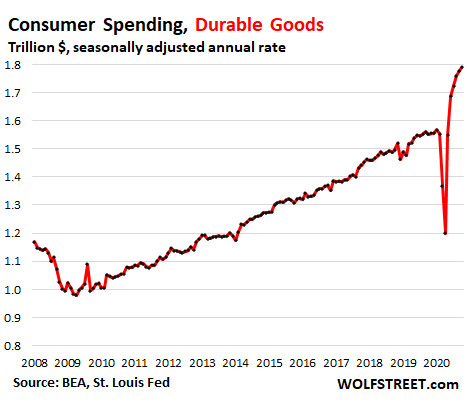 Many of these consumer goods, or their components to be assembled in the US, are imported from other countries. And this has created a historic surge of containers arriving at US ports starting in August.

For example, the Port of Los Angeles reported that imports of “loaded” containers for the four months of August, September, October, and November soared by 22% from the prior year, to 1.96 million TEU (Twenty-foot Equivalent Unit, a standard measuring unit in shipping, half of an FEU). This surge was the opposite of what happened during the Financial Crisis: 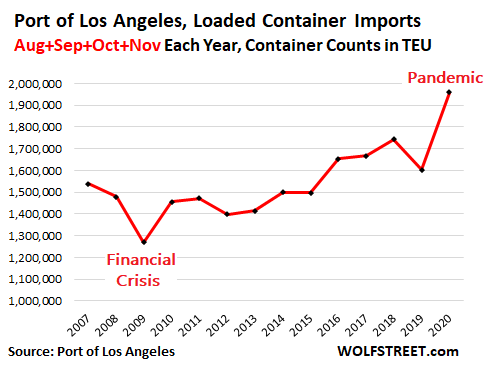 The sudden enormous demand for goods by consumers in the US (and similarly in Europe) for imported goods has created an equally enormous demand for empty containers in China and elsewhere in Asia to ship these goods to the US and Europe. These exporters in Asia are scrambling to get empties, and they have bid up freight rates to historic levels.

Container carriers are loving it. During the years of low freight rates, where the survival of those carriers was at stake – and some of them collapsed, such as the world’s seventh largest carrier, Hanjin in 2016 – container carriers have under-invested in equipment other than buying ultra-large ships. And their investment in containers has lapsed.

According to estimates by Drewry, cited by Loadstar, the global stock of containers, at 42.4 million TEU by the end of 2020, will be down 1% from 2019, just as demand for containers has exploded.

In addition, rather than owning the containers, carriers have refocused on leasing containers, in their drive to cut costs in past years as freight rates have languished at the low end of the spectrum. Leasing containers can offer more flexibility and lower storage and repositioning costs. According to Loadstar, over half of the global stock of containers is now being leased.

In addition, distribution and transload centers, due to social distancing requirements, are operating at less than full capacity. This has contributed to containers sitting around waiting to be unloaded, impeding the flow of containers. While there is a shortage of empty containers for exporters in the US and in Asia, the irony is that there is also a congestion of containers that are stuck and cannot move, not just in the US but around the world. Chalk it up to the Weirdest Economy Ever.