No Wonder the Cry Babies on Wall Street are clamoring for more. Five SPVs, already on ice, will expire on December 31.

The Fed released details today of its corporate-bond purchases in November ($215 minuscule millions) and corporate-bond ETF purchases in November (zilch). Last time it bought any ETFs had been on July 23. It released details about its other activities in its Special Purpose Vehicles (SPVs), which are essentially on ice. Five of them will expire on December 31, including the SPV that handles the corporate bond purchases.

The Fed unwound its “repo” positions in early July down to zero, and more recently most its “central bank liquidity swaps.” Its purchases of residential mortgage-backed securities (MBS) have been in a holding pattern since mid-September. What it is still buying at a steady clip are Treasury securities, thereby monetizing part of the debt the government is adding monthly to its gigantic pile.

The net effect is that its total assets have edged up just 1.0% since June 24, with a dip in the middle, after exploding higher in the prior three months. This is the Fed’s tool to bail out asset holders during each crisis, and enrich them when there is no crisis: 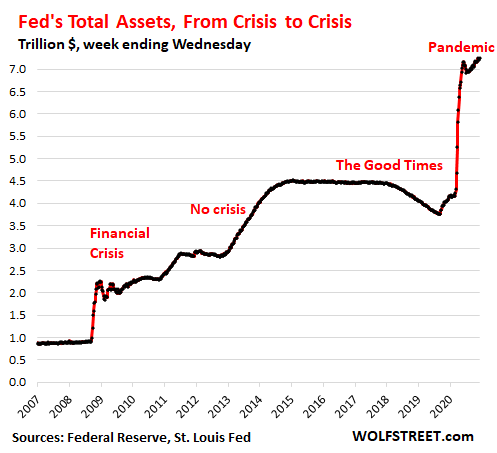 There is now clamoring among the crybabies on Wall Street that the Fed should increase its asset purchases, and they’re pressuring the Fed to announce a big increase at the next meeting, because, I mean, how else are markets going to keep on going up?

In terms of 2020: Total assets on the Fed’s balance sheet for the week ended December 9 rose by $20 billion from the prior week to $7.243 trillion, but were down a smidgen from the peak on November 18, having gone essentially nowhere over the past five months: 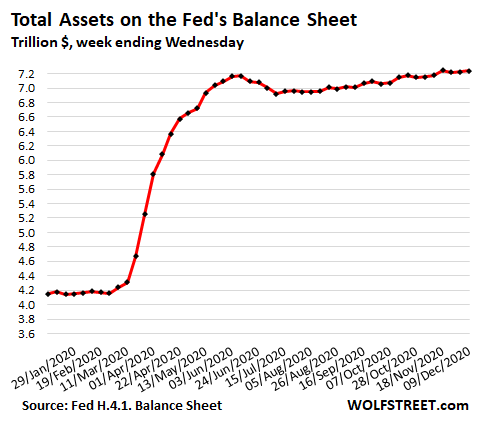 The Fed is still offering to buy repos but at a higher interest rate that is unattractive to the market. Since early July, there have been essentially no takers, except for a few tiny transactions every now and then.

The repo market is huge, with $2 trillion to $4 trillion in repos traded each day, and the Fed, even back when it was in it with both feet, was dwarfed by the rest of the daily volume. 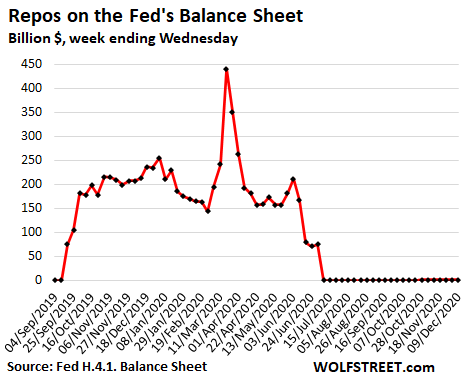 Central-bank liquidity-swaps fade, but look at the Swiss National Bank.

The Fed’s “central bank liquidity swaps” by which it provided dollars to a select group of other central banks, fell out of use and are down to just $9.6 billion, a tiny sliver of the Fed’s $7.2 trillion balance sheet, and down from a peak of $448 billion in early May. These swaps mature on a given date at which the Fed gets its dollars back, and the other central bank gets its local currency back at predetermined exchange rates.

But the Swiss National Bank is the exception: Its swaps with the Fed have been increasing since October, and in the latest week reached $5.8 billion, which is strange given that it has a habit of selling swiss francs for USD to buy US stocks with. Whatever its shenanigans may be, it now holds over 60% of the Fed’s tiny amount of remaining dollar swaps: 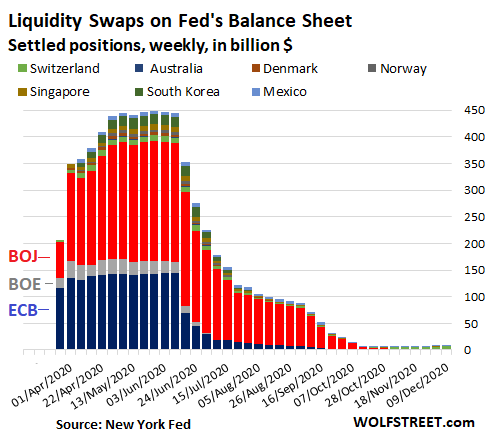 The Fed loans to the Special Purpose Vehicles (SPVs) that it set up. The Treasury Department provides the equity capital. The amounts in each of those SPVs on the Fed’s balance sheet is the sum of the Fed’s loans to the SPV, the equity capital from the Treasury Department, and interest earnings from the securities that the SPV acquired. But the Fed has barely lent to them, and the entities have been in decline for months.

Five of the SPVs are set to expire on December 31 – PMCCF, SMCCF, MLF, MSLP, and TALF – after Treasury Secretary Steven Mnuchin sent the infamous “Dear Chair Powell” letter to the Fed on November 20, where he explained that these five SPVs were no longer needed for numerous reasons that boiled down to markets are frothing at the mouth, and that those funds could be better used for fiscal support of the economy. Fed Chair Jerome Powell responded with his own “Dear Mr. Secretary” letter.

Even the SPV that holds corporate bonds and bond ETFs, the CCF (combined PMCCF and SMCCF), has been put on ice. The Fed stopped buying bond ETFs in July and added only minuscule and declining amounts of bonds since then, with the total of holdings now amounting to $13.6 billion. The rest of the $46.1 billion in the SPV is unused equity capital from the Treasury Department that Mnuchin now wants back, and interest earned from the bonds. Here are the SPVs: 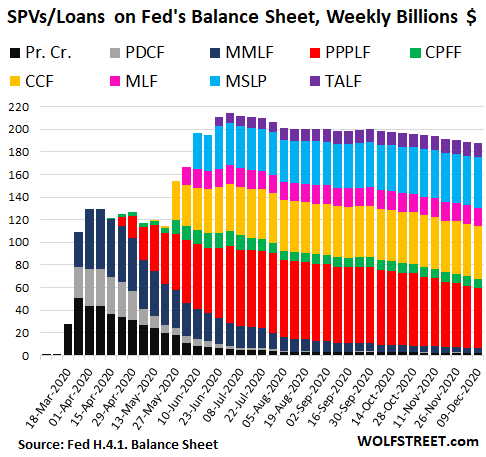 MBS in a holding pattern since mid-September.

The balance of mortgage-backed securities on December 9, at $2.0 trillion, was down a smidgen from September 16. MBS, as the chart below shows, are peculiar bonds.

All holders of MBS, including the Fed, receive pass-through principal payments when the underlying mortgages are paid off, such as during the current refinance boom. So the Fed needs to buy large amounts of MBS just in order to maintain its balance.

The Fed buys MBS in the “To Be Announced” (TBA) market, which take two to three months to settle, which is when the Fed books the trades. In addition, the Fed sells some MBS outright from time to time. And the timing between pass-through principal payments and settlements of trades is always off, creating this erratic line: 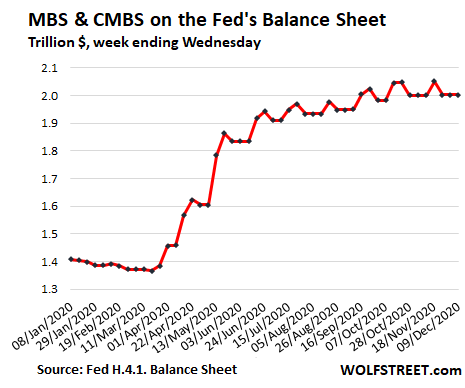 Treasury securities do the lifting.

This is where the Fed is steadily adding to its balance sheet, at a clip of about $80 billion a month, after the huge binge of purchases in March and April.

Over the past five months, the Treasury Department, in order to fund the budget deficits, has added $900 billion to the US national debt. And the Fed has bought $400 billion of it – monetizing 44% of this new debt.

But during the binge in March and April, the Fed bought $1.5 trillion in Treasuries, monetizing nearly 100% of the debt the Treasury Department was adding to the pile at the time: 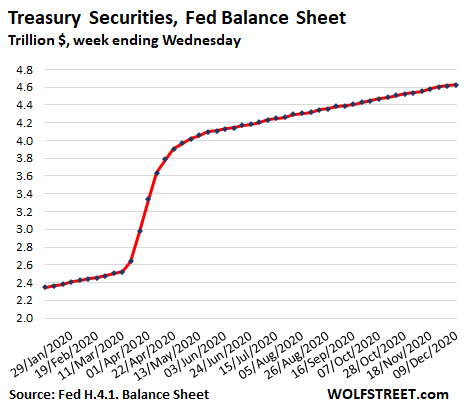