Complicated times for the dollar. The Chinese Renminbi, a distant also-ran, loses ground.

At the end of Q3, the share of US-dollar-denominated foreign exchange reserves rose to 59.8%, the third quarter in a row of increases, and the highest since Q3 2020, according to the IMF’s new COFER data on reserve currencies. Since the end of 2021, the share of the dollar rose by nearly 1 percentage point. 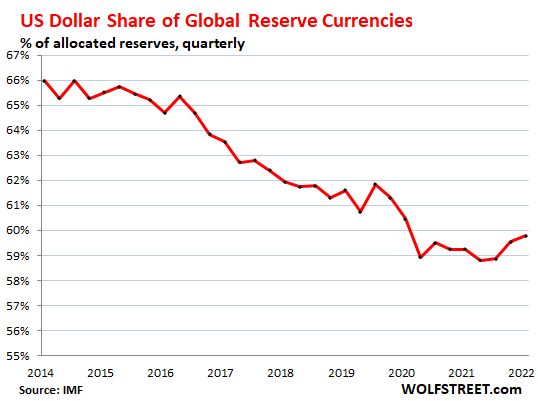 The dollar as reserve currency means that foreign central banks and other foreign official institutions hold US-dollar-denominated assets, such as Treasury securities, US corporate bonds, US mortgage-backed securities, and the like.

These foreign central banks and official institutions also hold assets denominated in other currencies. And all those assets combined make up the total global foreign exchange reserves, which amounted to $11.6 trillion in all currencies when expressed in USD, according to the IMF’s COFER data; 59.8% were dollar-denominated assets.

The remaining 40.2% were assets denominated in other currencies, primarily the euro, and a bunch of also-rans, whose value were then translated into USD.

The other major reserve currency, and the also-rans.

The euro is the second largest reserve currency. The Eurozone encompasses 19 countries with a population of 340 million people. Over two decades ago, when the euro was being promoted to Europeans, they often talked about “parity” of the euro with the dollar on all levels: as global reserve currency, as trading currency, and as financing currency. This reserve currency parity made progress until the Euro Debt Crisis brought to light the euro’s structural weakness. And that put an end to this parity talk.

Since then, the euro has had a share of about 20% of global reserve currencies (in Q3, 19.7%), about as large as all also-rans combined. But it was far below the dollar (black line, red dots in the chart below).

The yen (purple line at the top of the colorful spaghetti at the bottom in the chart) had a share of 5.3%. It became the #3 reserve currency in 2018, when its share surpassed that of the British pound.

The British pound, the #4 reserve currency, had a share of 4.6% (blue line just under the yen in the spaghetti).

The Chinese renminbi, the #5 reserve currency, dipped to a share of 2.8% in Q3 — only 2.8%, despite the huge size and global interconnection of China’s economy! Given the capital controls still in place, and other issues, it seems central banks are leery of RMB-denominated assets and are in no hurry to pile them on, despite years of predictions that they would. Folks that expect the Renminbi to overtake the US dollar as reserve currency will have to have enormous patience (green line with black dots near the very bottom). 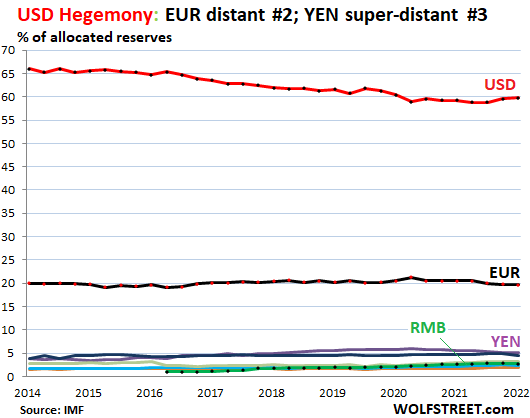 You can have a large trade surplus and a large reserve currency just fine.

But having the dominant reserve currency encourages the US to run up its gigantic twin-deficits: The US government deficits that have produced the incredibly spiking public debt; and the ballooning trade deficit, powered by Corporate America’s three-decade search of cheap labor. Both of these deficits would be more expensive to fund if the dollar were not the dominant reserve currency.

Dollar’s share gains in 2022 may be over: exchange rates and foreign exchange reserves.

Since the end of Q3, the ECB hiked rates and shed a huge €850 billion in assets, and the euro reacted, recovering some against the dollar. And the Bank of Japan made noises in that direction, and the yen bounced.

The values of foreign exchange reserves denominated in euros, yen, British Pound, renminbi, and other currencies are translated into dollar figures at the current exchange rate, so that they can be summed and compared.

For example, within the IMF’s data, the value of Japan’s official holdings of euro-denominated assets is expressed in dollars at the current EUR-USD exchange rate.

The exchange rate between the USD and other reserve currencies impacts the magnitude of the non-USD assets. To stick with our example, the magnitude, expressed in dollars, of the euro-denominated assets held by Japan fell as the euro’s exchange rate fell against the dollar.

So the increase in the share of the USD since the end of 2021 may have run its course because the plunge of the euro and yen have ended, and both currencies have bounced since the end of Q3.

At the end of Q3, the IMF’s cutoff point for this reserve currency data, the DXY closed at 112.2, where it had been 22 years earlier, in May 2002, but there were big movements in between (data via YCharts): 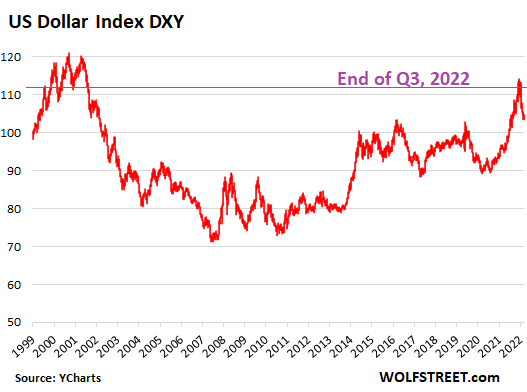 The long-term decline of the dollar’s share: not related to exchange rates.

So this portion of the long-term decline of the dollar’s share is not due to exchange rates, but due to central banks slowly diversifying away from dollar-denominated holdings and into securities that are denominated in other currencies.

The dollar had a share of 85% of global exchange reserves in the early 1970s. But over the next 15 years, the share plunged by nearly half, driven by an explosion of inflation that scared the wits out of holders of USD-denominated assets. One of the reasons why the Fed is now serious about cracking down on inflation is to avoid another dollar-fiasco like that: 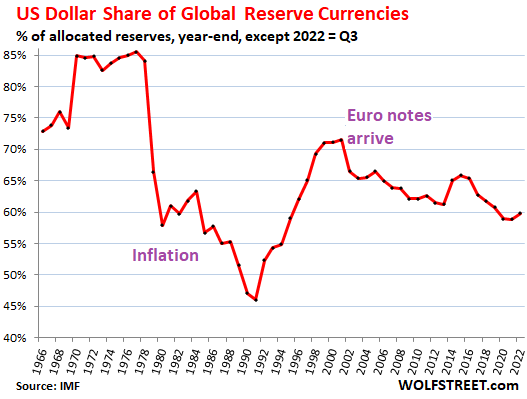