On Delays at restarting the explosion-damaged Freeport LNG export terminal and on weather forecasts.

US exports of Liquefied Natural Gas (LNG) in 2022, at 81.2 million tons, matched those of Qatar, the #1 LNG exporter in the world, according to ship-tracking data compiled by Bloomberg.

The US would have been #1 if an explosion in June hadn’t shut down the Freeport natural gas liquefaction plant in Texas, which cut LNG export capacity by 17%.

Qatar’s LNG exports have been relatively stable for the past 10 years, according to Bloomberg’s ship-tracking data. But the country is now engaged in major expansion projects amid a surge in global demand for LNG.

US LNG exports began to surge in 2016 from near-nothing when the first major LNG export terminal – originally an LNG import terminal – came on line. Since then, vast sums have been invested to build and expand LNG export facilities mostly in Louisiana and Texas, but also in Maryland and Georgia.

US LNG exports, in billion cubic feet, according to the US EIA’s latest data through October: 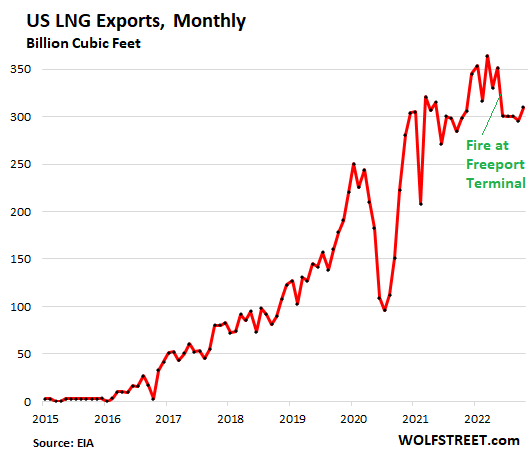 The explosion in June at the Freeport terminal damaged part of the terminal. The reopening of the plant has been delayed several times. The company reported publicly on December 23 that the reconstruction work necessary to start initial operations was “substantially complete,” and that it was “submitting responses to the last remaining questions included in the Federal Energy Regulatory Commission’s December 12 data request.” And it said it delayed plans to restart the facility until the second half of January.

Given the renewed delay – the info must have gotten out days earlier – the price of natural gas in the US plunged from $6.60 per million Btu on December 15, to $4.98 on December 23, the day of the public announcement.

The price then continued to plunge. Today, NG futures plunged another 11%, to $3.98 per million Btu at the moment, on weather forecasts over the weekend, which predicted a milder first half in January for the US. This brings the plunge since December 15 ($6.60) to 40%! Praying for Freeport to re-start exports asap? 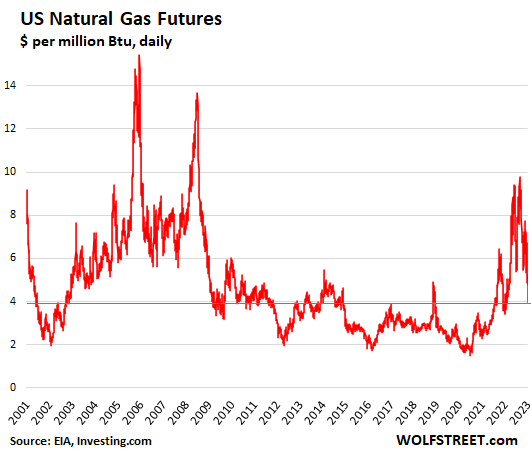 LNG exports provided a new market for the surging production of natural gas in the US, driven by fracking, which had collapsed the price of natural gas starting in 2009, as you can see in the above chart. For about the next 12 years, NG traded in the $2 to $4 range per million Btu, pushing many frackers into bankruptcy – including the big natural gas producer and pioneer fracker, Chesapeake in June 2020.

With surging LNG exports, natural gas prices broke out of the $2 to $4 range in 2021, and then spiked to nearly $10 with the surge in prices in Europe, demand for US LNG, now that LNG exports connected the price in the US to global prices. But the explosion at the Freeport plant, which reduced exports, and removed some demand from the US market, brought those prices back down. And then, over the near term, there’s always the weather.

In Europe, natural gas prices have unwound entirely the crazy spike in 2022 and have plunged back to October 2021 levels, amid record supply of LNG from the US and from other countries, record supply of piped natural gas from Norway, combined with a mild winter, and a reduction in consumption.