ECB’s assets drop by €800 billion. Mexico hiked too today, way ahead of the Fed, keeps peso from falling against USD.

This comes after the Fed pivoted even more hawkish yesterday, pointing at a peak rate of over 5%, and taking any rate cuts in 2023 off the table, and after the ECB this morning pivoted more hawkish and hiked by 50 basis points into the recession that it now sees, and said that it was “obvious” that there will be a series of 50-basis-point rate hikes despite any recession, and it announced that QT related to bonds would start in March, after it had already started QT related to loans at the prior meeting, which already caused its balance sheet to drop by 9%.

The ECB is now hiking into a recession, according to its own economic forecast. It expects this recession to be “relatively short-lived and shallow” starting this quarter. But it could get worse, according to ECB president Christine Lagarde, who added at the press conference that “risks to the economic growth outlook are on the downside, especially in the near term.”

Hiking rates into a recession is very hawkish. And it revised up its inflation outlook.

“Interest rates will still have to rise significantly at a steady pace to reach levels that are sufficiently restrictive….” Lagarde said, adding, “It is pretty much obvious” that “steady pace means we should have to raise interest rates at a 50-basis-point pace for a period of time.”

The ECB is grappling with raging inflation: Overall CPI inflation at 10%, with CPI inflation without energy at a record 7.0%, and some Eurozone countries at over 20% and even Germany at 11%. Inflation began soaring in 2021, after years of mega-QE and negative interest rates. And suddenly it’s a huge mess.

QT related to bonds will start in March 2023, it said today, by shedding €15 billion a month in bonds through 2023. The pace of subsequent declines “will be determined over time.” Details will be announced after the February meeting, it said.

QT related to loans already started at its October meeting to “help address unexpected and extraordinary inflation increases,” as it said at the time. To do so, it made the terms and conditions of its Targeted Longer-Term Refinancing Operations (TLTRO III) less attractive for the banks, which would speed up the banks’ exit from those loans.

These loans have dates at which they can be paid back, and two of those pay-back dates have already passed:

This TLTRO III unwind was the main factor in reducing its balance sheet by €803 billion, or by 9.1% from the peak in June. The green line is my estimate of the next balance sheet based on the announced €447 billion TLTRO III reduction. Total assets will drop to about €8.03 trillion: 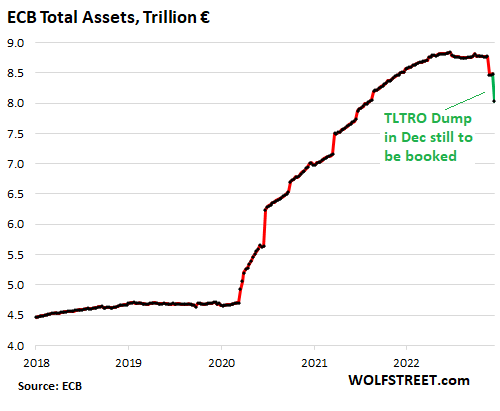 The Bank of England also hiked into a recession, by 50 basis points today, to bring its bank rate to 3.5%. Citing its Monetary Policy Report, it said that “the UK economy was expected to be in recession for a prolonged period and CPI inflation [currently 10.7%] was expected to remain very high in the near term.”

The Swiss National Bank sold foreign currency assets & raised its policy rate by 50 basis points to 1.0%, after its 75-basis-point-hike in September, and its 50-basis-point hike in June, and put further rate hikes on the table. Gone is the negative policy rate of -0.75%.

It’s doing so to counter “increased inflationary pressure and a further spread of inflation.” Inflation in Switzerland was 3.0% in November and “is likely to remain elevated for the time being,” it said.

And the SNB has done so. In the second and third quarter, as we know from the SNB’s SEC filings, it unloaded hundreds of thousands of shares of its biggest holdings of US stocks, from Apple, Microsoft, Alphabet, Amazon, and Meta on down. And it has taken massive losses as asset prices in its huge portfolio of foreign-currency-denominated securities have dropped.

The Bank of Mexico hiked by 50 basis points today, to 10.5%, after having hiked by 75 basis points four times in a row, mirroring the Fed. Core inflation in Mexico rose to 8.5%.

The Bank of Mexico started hiking in mid-2021, from 4.0%, nearly a year ahead of the Fed, to stay ahead of the Fed, similar to Brazil and some other central banks. They did this to grapple with inflation at home and to support their currencies against the USD.

Which worked. Over the 18 months of rate hikes, the Mexican peso has strengthened against the USD, while the currencies of the laggards such as the ECB and the Bank of Japan watched their currencies take a drubbing.