Unwound less than half the big jump in October, zig-zagging higher, which is why one month doesn’t make a trend.

Retail sales, reported today, are based on retailers’ revenues. Retail sales cover goods, not services. Prices of services have been surging, and services is where nearly two-thirds of the consumer spending goes. But prices of many goods have been falling in recent months, such as gasoline, used vehicles, electronics, household furnishings, and others. This is where retail sales dipped in November. Retail sales rose where prices rose, such as stores that sell food and beverages and at restaurants.

Another factor were the “inflation checks” that some states sent to residents in the fall. In California, a big batch of electronic deposits went out in October; a second batch went out through mid-November. Another batch is going out right now; and a final batch will go out through mid-January. Some of the early funds got spent in October, adding to the surge in retail spending in October, with smaller amounts getting spent in November.

Total retail sales declined by 0.6% in November from October, to $689 billion (seasonally adjusted), unwinding less than half the 1.3% jump in October (from the “inflation checks?”). Year-over-year, retail sales were still up 6.5%. And compared to November 2019, they were up 32%. The insert shows how sales zig-zagged higher, which is why one month doesn’t make a trend: 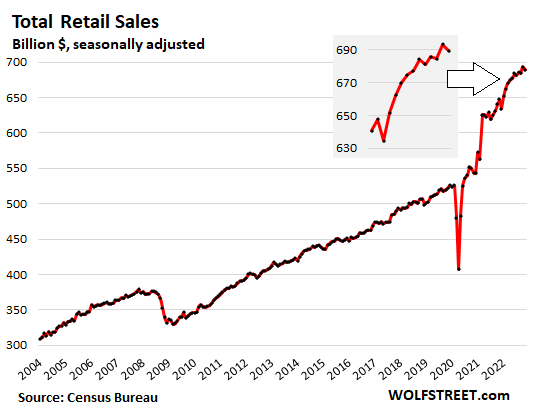 Sales by category of retailer, largest to smallest:

New and Used Vehicle and Parts Dealers: Sales fell 2.3% for the month, to $127 billion, still up by 1.3% from a year ago, and by 20% from three years ago. This is the largest category of retailers. 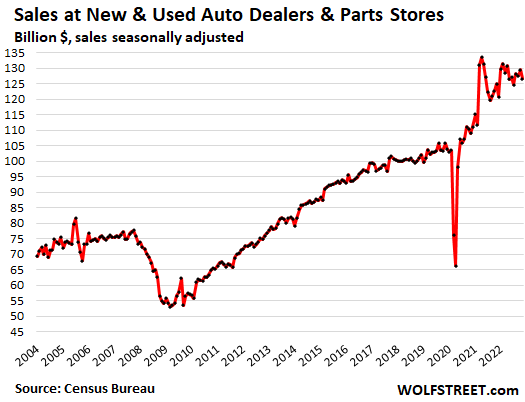 Ecommerce and “nonstore retailers”: sales fell 0.9% for the month, to $109 billion, undoing the increase in the prior month. Year-over-year, sales rose 7.7%, but wait… Compared to November 2019, sales exploded by 69%!

Ecommerce sales include a large spectrum of goods, from food to used vehicles, dealing with the same price drops experienced in various product categories.

This category includes sales by the ecommerce operations of brick-and-mortar retailers, all kinds of ecommerce retailers, along with sales at stalls and markets: 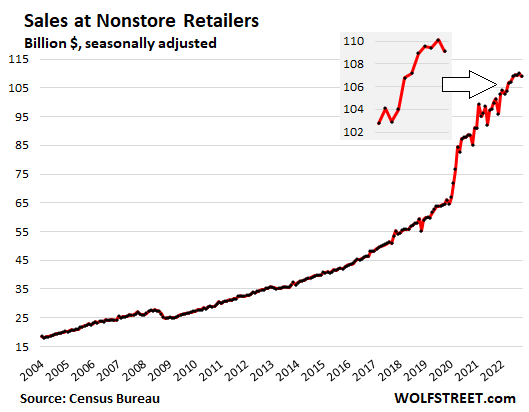 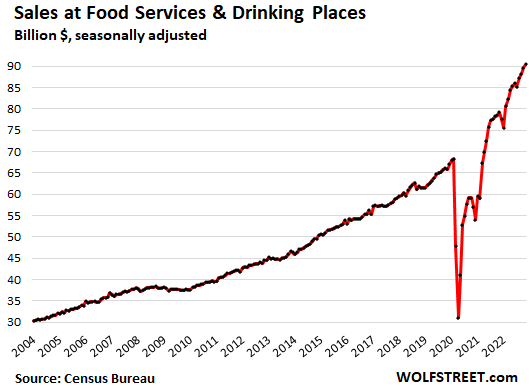 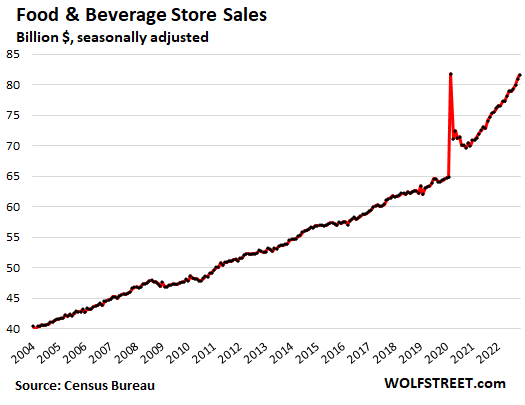 Gas stations: Sales dipped 0.1% for the month, on declining gasoline prices. But at $64 billion, sales were still up 16.2% year-over-year, and by 49% from three years ago, reflecting the spike in gasoline prices through mid-2022.

Sales at gas stations include all the other stuff gas stations are selling, and many of which are convenience stores. 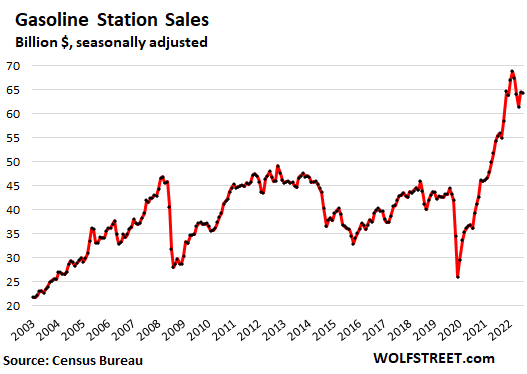 General merchandise stores: Sales rose 0.4% for the month, and by 4.0% year-over-year, to $59 billion, up by 21% from three years ago. This includes Walmart and Target; they’re big grocery vendors, and food inflation is rampant. Walmart, the largest grocery vender in the US, has discussed this in its earnings calls.

These sales do not include brick-and-mortar department stores whose slow death as an American shopping venue we’ll get to in a moment: 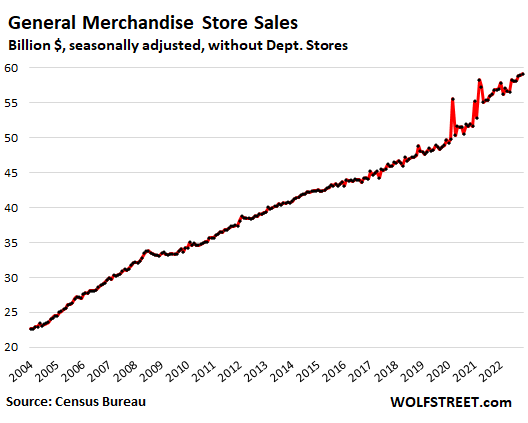 Building materials, garden supply and equipment stores: Sales fell 2.5% from the record in the prior month, to $42 billion, and were up 3.6% year-over-year. Compared to three years ago, sales were up 36%. 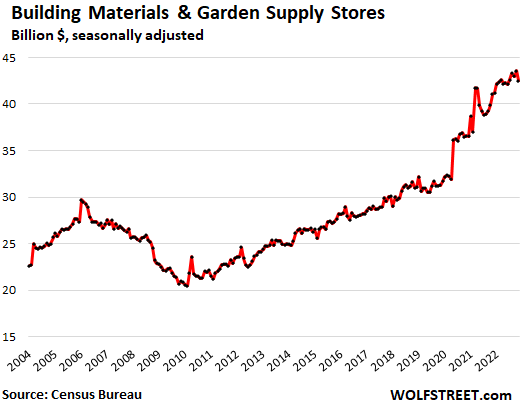 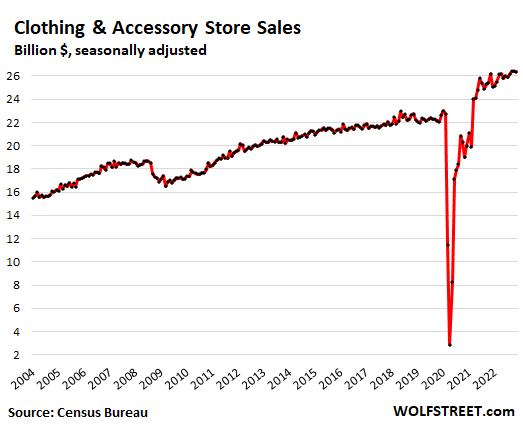 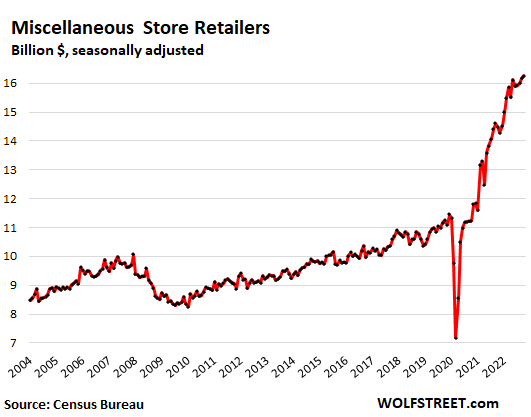 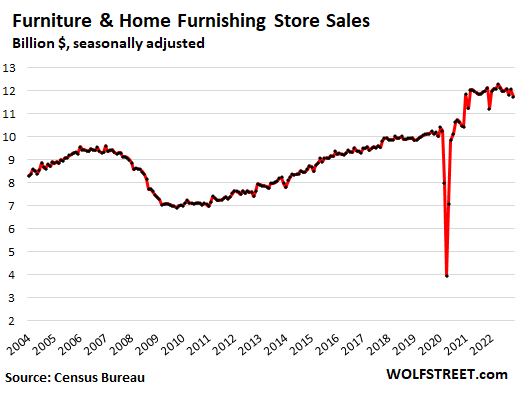 Back in the 1990s, department store sales accounted for about 10% of total retail sales. Today, they’re down to just 1.8%: 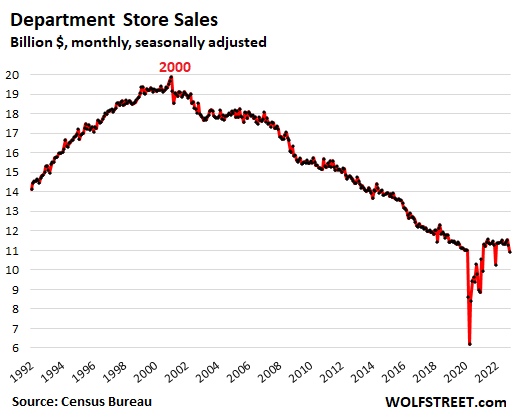 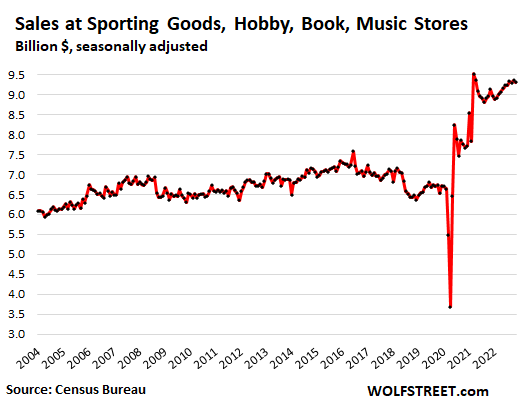 The CPI for electronics fell 1.0% for the month and by 10.8% year-over-year. So these price declines are part of the challenges for these retailers; another part is that their sales have wandered off to the internet. 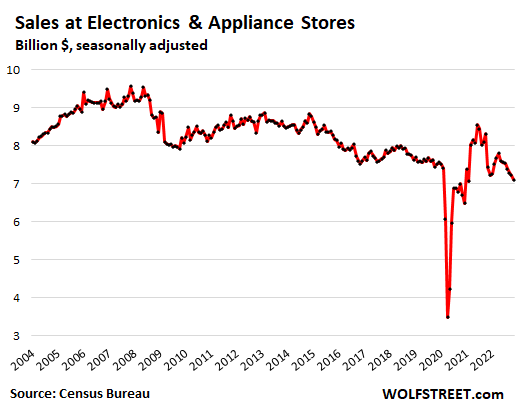