One more reason why the Fed isn’t “trapped.” And the banks came out ahead.

What happens when $11 trillion of fiscal and monetary stimulus are handed out in 22 months? That’s how much it has already been: $4.7 trillion in printed money that the Fed threw at the financial markets and $6.6 trillion that the government borrowed and handed out. On top of which came the huge forbearance programs and eviction bans that allowed consumers to not pay their obligations, and not get their credit dinged when they fail to pay those obligations.

There are a lot of consequences, including the worst CPI inflation in 40 years, the most splendid housing bubbles ever, along with spiking rents, and the hugest speculative asset bubbles ever with wealth inequality ballooning to the worst levels ever, and consumers, flush with money, went on a huge spending binge, leading to the worst US trade deficit ever.

And then there is this consequence:

So we’ll walk through it, chart after chart, based on data from the New York Fed’s Household Debt and Credit Report for the fourth quarter.

The mortgage forbearance program had the effect that delinquent mortgages were put on ice, and the “delinquent” status was removed, while homeowners didn’t have to make mortgage payments.

Then the Fed’s $4.7 trillion in money printing and its interest rate repression triggered the biggest housing bubble ever. With home prices soaring, homeowners could sell their home, pay off the delinquent mortgage that didn’t count as delinquent anymore, and walk away with cash. Or they could modify the mortgage or refinance the mortgage with new terms with lower rates. And this is what happened.

As a result, the 90-day and over delinquency rate hit 0.46% of outstanding loan balances, the lowest on record: 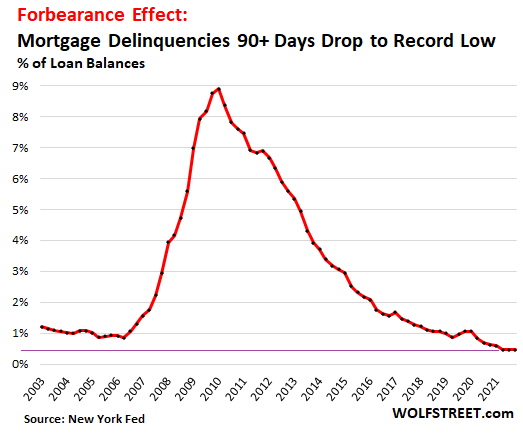 But then the mortgage forbearance programs began phasing out, and by Q4, the rate of newly delinquent mortgages ticked up for the first time since 2019, to 1.6%: 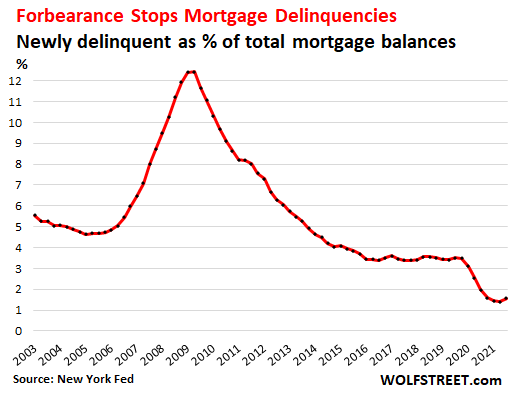 The number of consumers with foreclosures dropped to a record low of 8,100 consumers in Q2 last year and remained in the that range since with a barely visible uptick to 8,880 in Q4. By comparison, during much of the mortgage crisis, over 400,000 consumers per quarter had foreclosures: 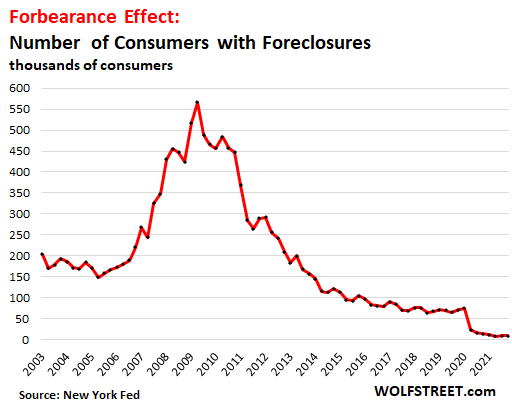 The official student loan delinquency rates had been running in the 11% to 12% range before the pandemic, despite numerous programs that allowed student loans to be deferred without triggering delinquency status. 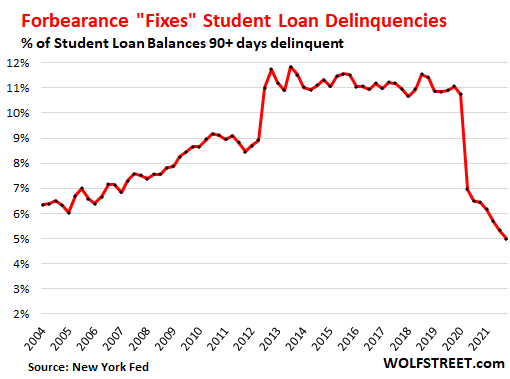 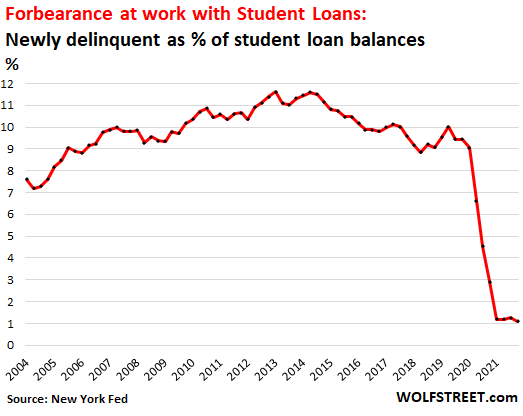 In the years before the pandemic, I covered many times the issues plaguing auto loans after lenders got aggressive trying to maximize their profits by issuing high-interest-rate loans with loosey-goosey underwriting to subprime customers. Just before the pandemic, auto loan delinquencies hit 5.1% of total auto loan balances, the highest since the peak of the Great Recession.

But then came the tsunami of free money, and by Q4, the 90-days-plus auto loan delinquency rate dropped to 4.0% of total auto loans, the lowest since Q4 2017: 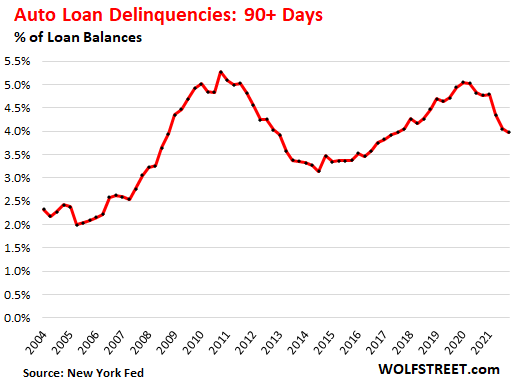 And the rate of newly delinquent auto loans dropped to a record low of 5.0%: 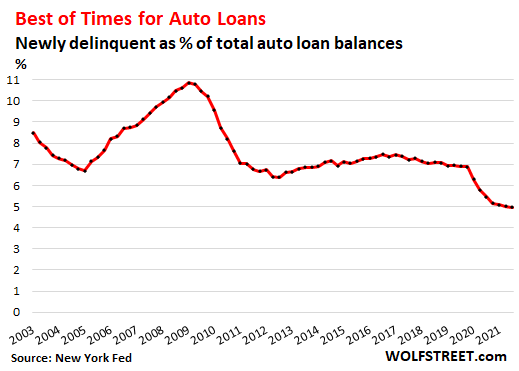 The 90-day-plus credit card delinquency was running around 8% of total balances, amid loosey-goosey underwriting and an aggressive push into subprime credit cards where banks would charge interest rates of 25% or 30%.

Then came the free money, and some people used it to catch up on their credit card debt, and the seriously delinquent balances peaked in Q1 2021 and then started falling. In Q4, they dropped to 8.3%, the lowest since Q3 2019: 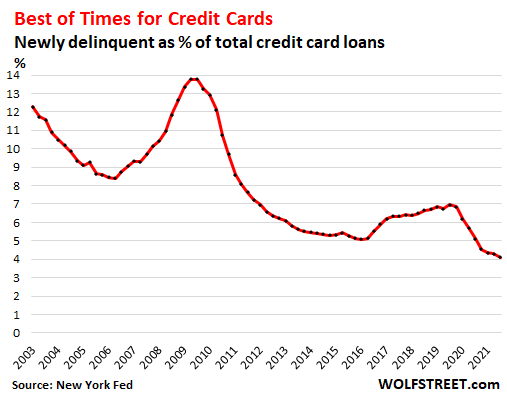 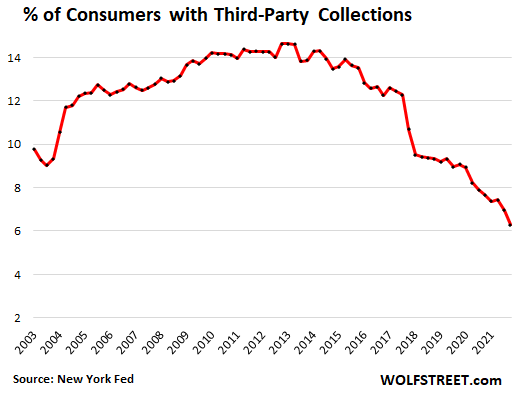 Ah, the collapse of the bankruptcies.

With free money, forbearance, and eviction bans, consumers were let off the hook in a historic manner, as the above charts have shown. As a result, the number of consumers bankruptcies in Q4 dropped to the lowest on record of 93,800.

Note the effect of the Bankruptcy Abuse Prevention and Consumer Protection Act of 2005, that caused a swarm of consumers to front-run it to file for bankruptcy before the deadline of October 17, 2005. After the new law took effect, bankruptcy filings plunged. The Financial Crisis fueled another bout of bankruptcy filings. But since then, filings have dropped, and the drop accelerated during the pandemic: 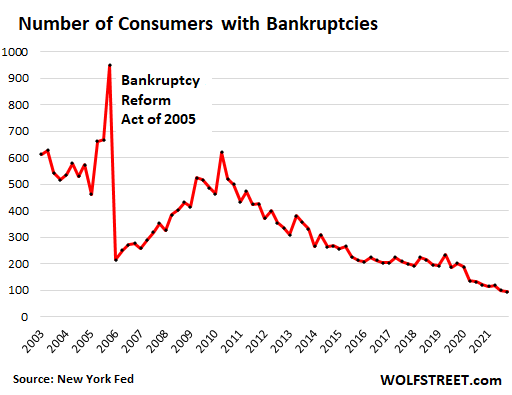 The banks came out ahead.

This sharp decline in delinquencies, defaults, and foreclosures across the consumer credit spectrum is a huge benefit for the lenders – the entities that the Fed primarily represents and regulates – because their consumer-credit charge offs plunged. Risky loans that the lenders were issuing at high rates? Suddenly no problem, thanks to this free money, they generated huge incomes and few credit losses.

Fed tightening not getting derailed by consumers.

Some folks have been saying for months that the Fed can never taper QE, that it can never raise rates, and that it can never shed its assets (QT), that in fact the Fed is “trapped,” and one of the reasons they enlist is the state of the consumer, that consumer credit couldn’t handle any kind of tightening.

Alas, as Powell has been pointing out as part of his reasoning why the Fed can tighten monetary policies just fine: Consumers are in historically great shape in terms of delinquencies, foreclosures, collections, and bankruptcies.

The $11 trillion in stimulus, spread around in 22 months, with much of it still trying to find a place to go, has had a huge effect. And it would take a lot of monetary tightening and financial disruption and much higher interest rates and some job losses to return these consumer credit measures to even the historical mean.

234 comments for “It Only Took $11 Trillion in Free Money plus Forbearance & Eviction Bans to Perform this Miracle on Delinquencies, Foreclosures, Third-Party Collections, and Bankruptcies”