Worst inflation in 40 years is spreading deeper into the economy.

The broadest Consumer Price Index (CPI-U) jumped by 0.5% in December from November, and by 7.04% from a year ago, the highest since June 1982, according to data released by the Bureau of Labor Statistics today.

But there’s a big difference between now and 1982. Now, the inflation index is spiking, and has been getting worse month after month; back in 1982, inflation was coming down. The last time inflation actually spiked like this on the way up and broke through the 7%-mark was in June 1978: 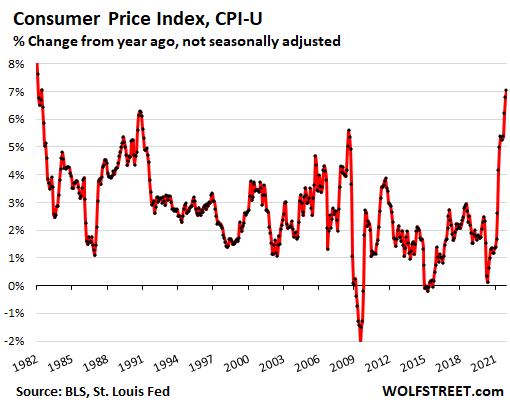 By a narrower measure, the Consumer Price Index for All Urban Wage Earners and Clerical Workers (CPI-W), the index used for Social Security COLAs, spiked by 7.8%, the worst since January 1982.

Inflation without food and energy – tracked by the “core” CPI – spiked by 5.5%, the most since February 1991. Food and energy prices can move with the volatile prices of the underlying commodities, and there have been some big surges among those commodities. But this “core” CPI shows how deep inflation has moved into the economy beyond prices that depend on volatile commodities. 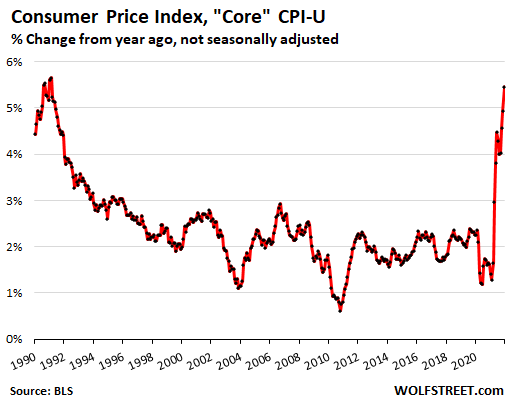 But so far, the Fed has refused to deal with this inflation. It is still repressing short-term interest rates to near 0%, and it’s still printing money in large amounts, though less than it did two months ago.

The effective federal funds rate (EFFR), which the Fed targets with its interest rate policy, is now at 0.08%. With CPI-U inflation at 7.04%, the inflation-adjusted or “real” EFFR is a negative 6.96%, the most negative “real” EFFR in the data going back to 1954, the hallmark of the most reckless Fed ever. 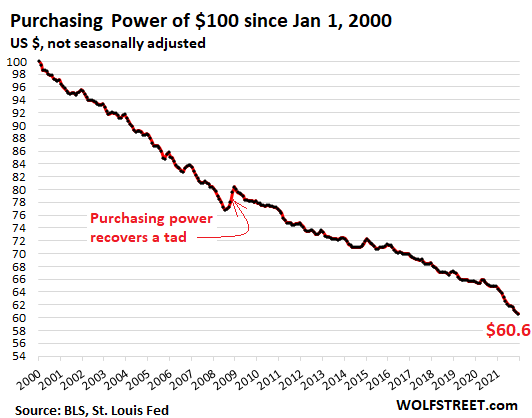 The CPI contains two measures of rent that account for 32% of the CPI. These rent factors are the biggie. They dropped sharply in 2020 and early 2021, then U-turned in June and have been rising every month since, gradually picking up the increases in market rents. Because both measures are still below CPI, they’re still holding down CPI, but less than before.

“Rent of primary residence” (makes up 7.6% of overall CPI), rose by 3.3% year-over-year but remains below where it had been before the pandemic, as it is gradually pushed higher by the surge in market rents (red in the chart below).

“Owner’s equivalent rent of residences” (makes up 23.5% of overall CPI), the stand-in for the costs of homeownership, is based on surveys that ask homeowners to estimate what their home might rent for. It rose 3.8% year-over-year (green line). 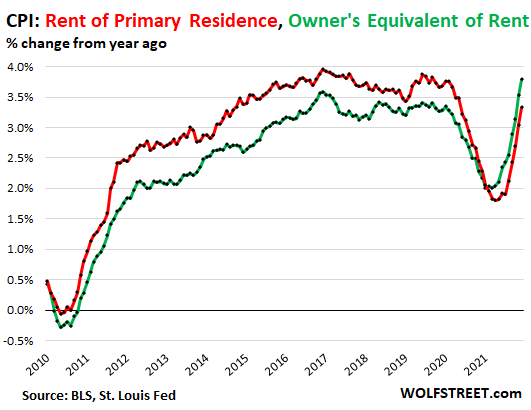 The two indices are now picking up the surges in market rents that started many months ago. Together, they account for nearly 1/3 of CPI, and while they’re still pushing down CPI, they’re pushing down less.

Given the surge in market rents last year that are now gradually filtering into these indices, we can see what direction they’re going this year, providing upward pressure on CPI.

The actual costs of buying a home spiked in 2021 by around 20%, according to the Case-Shiller Home Price Index, depicted in my series, The Most Splendid Housing Bubbles in America. This price spike leaves in the dust the “Owner’s equivalent of rent,” the stand-in for the costs of homeownership. Both, the Case-Shiller index (purple) and the “Owner’s equivalent of rent” (red) are set to 100 for January 2000: 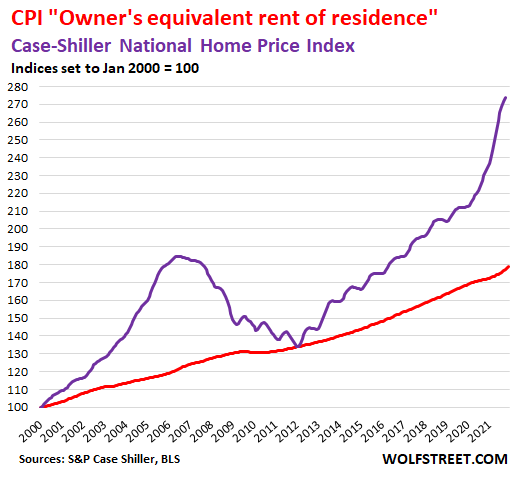 The CPI for used cars and trucks (3.4% in overall CPI) jumped by 37.3% year-over-year. And it’s still going to get worse over the next month or two because wholesale prices, which lead the CPI by about two months, spiked majestically over the past three months, and are up 47% year-over-year, and the December CPI just picked up a portion of the spike (chart shows index value, not % change): 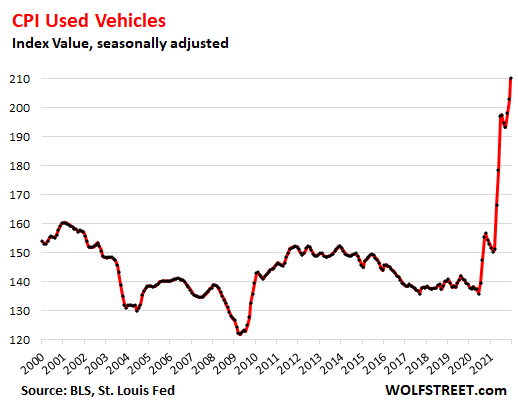 The CPI for new cars and trucks (3.9% in overall CPI) spiked by 11.8% year-over-year, the highest since 1975, and just below the two historic records set in 1975, as dealers have been selling new vehicles with addendum stickers of $2,000 or even $10,000 or more on top of MSRP. And consumers are paying no matter what as price resistance has completely fallen apart (chart shows the year-over-year % change): 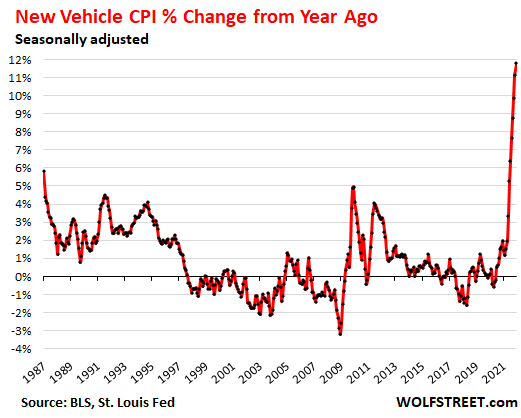 Surely someday, the ridiculous price increases of new and used vehicles will back off. Spikes like this cannot continue spiking like this. But then other prices are spiking, including in services, and we can already see the rent factors, which account for one-third of CPI, pulling up to provide oomph in 2022. And they have nothing to do with the semiconductor shortages.

This is what inflation looks like when price resistance among consumers and businesses has collapsed, allowing companies to raise prices without losing customers, and thereby allowing inflation to spiral higher. Inflation is in part a psychological phenomenon. The inflationary mindset set in last year for the first time in decades. Why it has set in isn’t hard to pin down: The world is awash in newly created money, and it’s circulating, and enough people got enough of it through stimulus and asset price bubbles and cheap loans that they’re paying whatever and don’t even care anymore. And the most reckless Fed ever is still fueling this raging inflation.

270 comments for “Purchasing Power of the Dollar Goes WHOOSH!”