Shippers in the US – from manufacturers to mom-and-pop online retailers – have been wailing about it all year in 2021, and it got worse as the year went on: Surging shipping costs. Freight companies, facing numerous obstacles, jacked up prices amid strong demand. And the result is a historic spike in the amount that shippers paid to transportation companies.

The total these shippers spent in December on shipping goods to their customers in the US spiked by 43.6% from December 2020 and by 62.3% from December 2019, according to the Cass Freight Index for Expenditures, released by Cass Information Systems.

The index is a combination of shipment volume (more on that in a moment) and freight rates. It’s centered on trucking, with truckload shipments representing over half of the dollar amounts, rail in second place, less-than-truckload shipments in third place, followed by parcel services and others. It does not track shipments of bulk commodities. 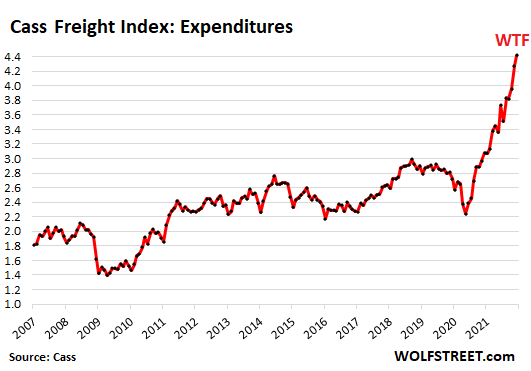 Shippers struggled all year with capacity constraints and delays and chaos in the transportation sector, with containers stranded somewhere, with chassis shortages at ports, with rail yards and ports backed up. Trucking companies complained about driver shortages. Warehouse operations were hampered by staffing shortages that ended up sidelining trailers and containers. Railroads ran into their own bottlenecks at rail yards; and, after having laid off 33% of their workers in six years, they complained about labor shortages. Chaos kept the system from operating efficiently, hampered throughput, and restrained shipment volume.

Note the seasonal low points in January and the distortions during the pandemic. Much of the year 2018 set records that still stand as companies were loading up on inventories ahead of the tariffs – but at the time, the transportation system wasn’t bogged down in the type of chaos that is in the system now. 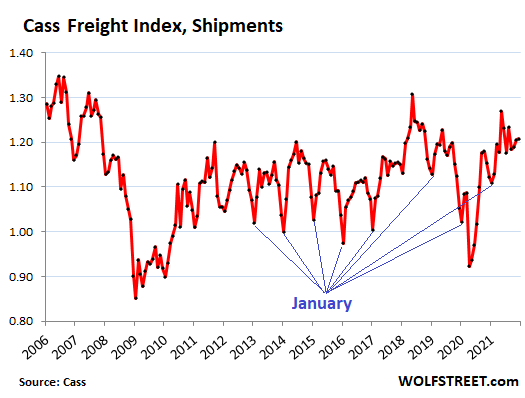 The average national spot rate for van-type trailers has been rising for the past 12 months and in June reached $2.99 a mile, up 22% year-over-year, according to DAT Freight & Analysis. Regionally, the average rate ranged from $2.72 in the Northeast to $3.41 in the West.

The average national spot rate for flatbed trailers (heavy equipment, construction materials, etc.) jumped by 24% year-over-year to $3.07 per mile, but has flattened out since last summer, with the average rate having peaked in June at $3.15 per mile. Regionally, the average rate ranged from $2.98 in the Southwest to $3.35 in the Midwest.

Diesel prices jump then dip then…

WTI crude oil traded above $80 a barrel back in October, but by mid-December, WTI had dropped back to the $65 range. This multi-week decline triggered the dip in diesel prices in November and December that you can see in the chart below. But WTI has risen since then, ended December at $75, and now is at $82 a barrel. And diesel prices started ticking up again. In 2012 through mid-2014, WTI traded in a range between $85 and $105. So there is yet something to look forward to: 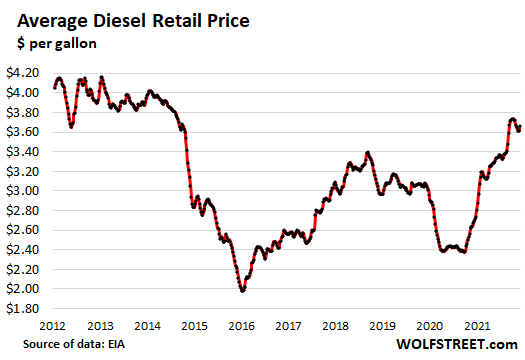