The spike was thought to have been buried and relegated to history. Turns out, it was an undead spike that’s now roaming the land again, wreaking havoc.

In this crazy environment of shortages and ridiculous prices even without shortages, when consumers and businesses pay whatever because price resistance has totally collapsed in 2021, and because businesses are confident that they can pass on those higher prices that they’re paying, well, in this environment, lumber stands out as a shining example because the price of Chicago lumber futures had more than quadrupled in the 11 months between June 2020 and May 2021. Last May, I said, “these WTF price spikes cannot last.” And then the price collapsed 73% in three months – end of crazy-inflation story. Even the Fed cited this collapse as an example of why inflation would be transitory.

But wait… Lumber started spiking again almost as soon as it bounced off the bottom, nearly tripling in five months from the post-collapse August 2021. 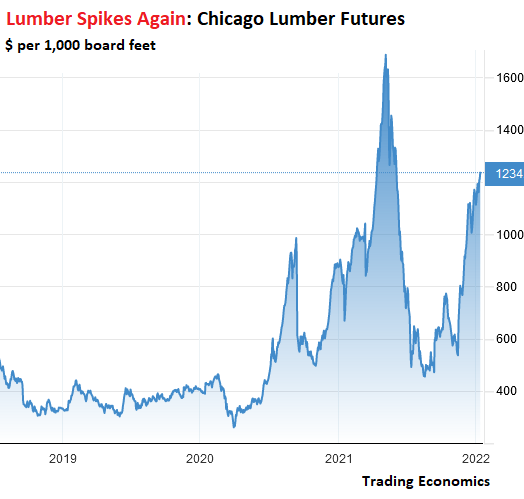 There are lots of reasons for this spike, the primary reason being that enough people and their businesses paid these crazy prices, confident that they can pass them on as price resistance has collapsed.

There are also labor shortages at lumber mills. There were massive wildfires in the West last year. There is hoarding among homebuilders that have gotten burned by shortages. There is a lot of demand from homebuilders for lumber because they see a lot of demand for houses from homebuyers, and homebuyers are now paying no matter what. There were supply disruptions due to heavy rains and extensive flooding that damaged transportation networks in British Columbia. There is also, as is always the case everywhere in this era of financialization of everything, the drive to speculate and wring the last dollar out of everything, and when the right meme comes along, it creates bubbles that then burst.

The interesting thing with lumber is that this crazy spike that was thought to have been buried and relegated to history turns out to have been an undead spike that is now roaming the land again, wreaking havoc.

This kind of craziness will be visible in other product categories. The totally insane used vehicle prices will come down, and there might even be a quickie plunge in the wholesale price, only to re-spike again. We’ve got a veritable inflation-sh*tshow going on here whose crazy ups-and-downs are going to prove everyone wrong eventually.