Irrational behavior by buyers confidently betting on being able to pass on that irrationality to their customers. It works until it doesn’t.

Lumber futures on Chicago Mercantile Exchange currently trade at a record high of $1,610 per thousand board feet, having quadrupled since February 2020, just before the Pandemic, a sign of scary-crazy inflation amid suddenly blistering demand from builders, insufficient supply to meet that sudden surge in demand, growing lead times, and irrational behavior by buyers betting on being able to pass on that irrationality via higher prices to their customers (chart via Trading Economics): 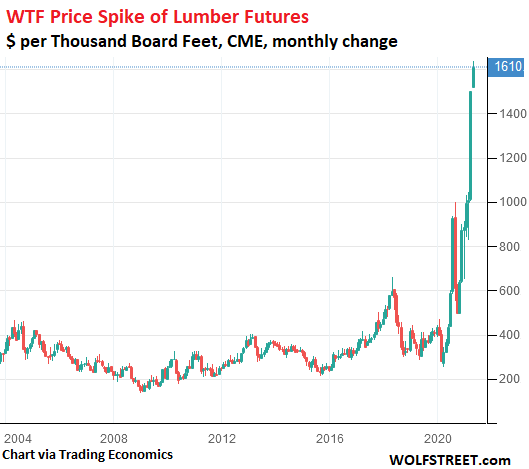 And these are the pros, not consumers.

A local electrician with a shop in Idaho near Moscow (where the University of Idaho is) was talking with one of the house builders he does work for. And this is the story he passed on to WOLF STREET:

“Moscow Building Supply (MBS) is the big building wholesaler in Latah County – last summer, you could buy a sheet of OSB [Oriented Strand Board, a type of plywood] at about $12 a sheet (4×8). Last week, $50 a sheet.

“A couple days ago, MBS got a truck load of OSB. A big home builder in Spokane drove down to MSB and bought the entire truck load – even before it was unloaded – for $80 a sheet.

“The next load is scheduled in two weeks. MBS is now telling customers to expect to pay $105 a sheet.

“Also plastic piping, such as 3-inch PVC pipe, commonly used by electricians as conduit. Last fall, my son paid 12 cents a foot. Now it is going for $5 a foot.

“My son says he now gets updates on price sheets from his electrical parts wholesaler weekly, rather than twice yearly.

Sure, there are all the logical and rational elements.

And these builders are making hay while the sun shines, and they’re building no matter what the input costs, assuming confidently that they can pass on the additional $30,000 in lumber costs to the eventual home buyers.

And the eventual home buyers, facing suddenly blistering competition from other home buyers, are willing to pay nearly any amount to get their hands on a home.

That buyers all along the chain are willing to pay those prices shows that there is a massive shift in the mindset. What would have caused a buyers’ strike in past years is now causing a buyers’ frenzy.

Price spikes like these trigger mega-profits for producers, and they’re trying to maximize their profits by ramping up production, and thereby supply. And eventually, supply meets demand and then exceeds demand, and then supply keeps piling up everywhere because producers are still making hay while the sun shines and they’re producing more and more supply.

And that’s how these price spikes are eventually resolved: They produce a glut, and at least part of that WTF price spike collapses.

For example, if the price of lumber futures collapses by 60% from today’s $1,610 per thousand board feet, it would still be at $640 and would still be far higher than the middle of the range of the prior 10 years.

So part of this scary-crazy inflation would be “temporary,” as the Fed keeps pointing out, but part of it would not be temporary but would be baked into the economy. And even that “temporary” part could exceed the 2021 time-frame. And it increasingly looks like the Fed is going to have one heck of a Fed-created problem on its hands.

188 comments for “Lumber: Scary-Crazy Inflation Now Gets Passed On. But These WTF Price Spikes Cannot Last”