This sort of sudden structural collapse in demand for office space raises some existential questions for landlords.

Companies are not massively defaulting on their office leases, and that’s the good thing. But they have put a historic amount of vacant office space on the sublease market, while continuing to pay rent to the landlord. They decided they no longer need that much space, now that some form of flexible work, or hybrid work-from-home, or even permanent work-from-anywhere is being integrated into office real estate plans, cost cutting efforts, and footprint-reduction strategies.

Now, 14 months into the Pandemic, office occupancy – workers actually showing up at the office – is still dreadfully low. As of the end of April, office occupancy in the 10 largest metros averaged only 26.5% of where it had been just before the Pandemic, according to Kastle Systems today, whose electronic access systems secure thousands of office buildings around the country. In other words, the number of people entering these offices was still down by 73.5% from pre-pandemic levels and has barely made headway in recent months: 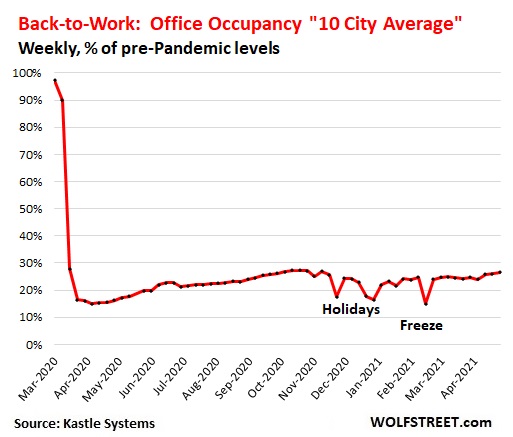 The epicenters of work-from-home show the biggest drops in office occupancy rates, according to Kastle’s “Back to Work Barometer” at the end of April: in San Francisco, the occupancy rate was at 14.8% of the pre-Pandemic level, in New York City at 16.2%, and in San Jose at 18.0%.

A survey of Californian residents found that 82% of the employees who now work at home want to continue working at home at least some of the time. Only 18% don’t want to work at home at all.

But even at the top end of office occupancy, working remotely is still king. In Dallas, office occupancy is at 41.2% of where it was pre-Pandemic, and in Austin at 40.2% (click on the chart to enlarge): 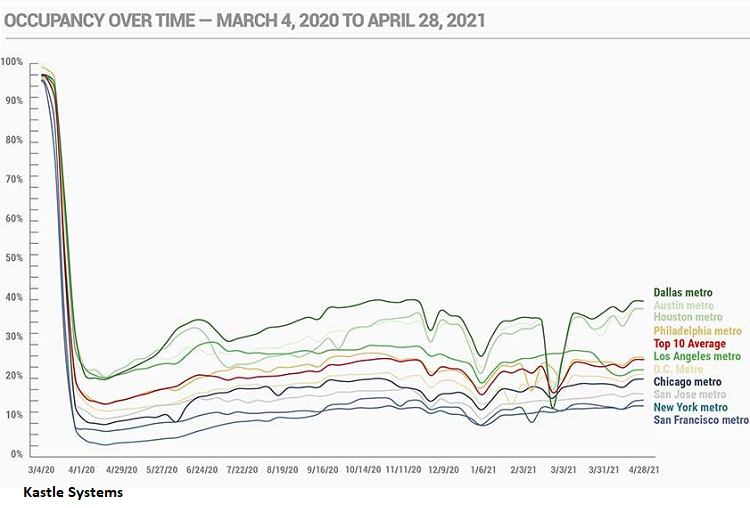 How exactly this will shake out for office real estate is getting complicated, as they say, with everyone involved having different ideas as to what they want.

A survey by Accenture of 400 North American financial-services companies found that 80% of the executives would like for workers to spend four or five days in the office post-Pandemic. Many of them think that working at home makes training younger employees more difficult and is hurting company culture.

But employees are looking for flexibility, now that they have proven that they can be productive at home.

“You’ve seen the senior executives sitting in their office and there’s nobody behind them,” Laurie McGraw, head of Accenture’s capital markets industry team in North America, told Bloomberg. “And then you see the entry-level folks starved for in-person interaction because they need to be coached on a more regular basis. And then there’s the vast middle that’s content to be home.”

The work-from-home year 2020 generated record profits for banks, proving that work-from-home can be managed, and many employees question the need to commute every day. According to Rob Dicks, Accenture’s talent and organization head for capital markets, employees are likely to push back against a full-time return.

Despite whatever executives would like, the reality of the cost-cutting aspects of working from home has already set in. According to Accenture’s survey, of the same executives:

Financial firms have been all over the place with their plans.

Vanguard Group, which employs about 17,300 people, is planning a hybrid model for most of its staff, with many employees able to work from home on Mondays and Fridays.

Bridgewater Associates is going for the hybrid model as well and will allow their employees to work from home at least part of the time.

Deutsche Bank, which employs about 8,000 people in the US, is planning to let its staff work from home for up to three days a week. Separately, the bank had said that it wanted to reduce its office foot print to cut costs.

Deutsche Bank is offering “flexibility” as an inducement for hiring and retention. A survey had found that 90% of its employees wanted the opportunity to work from home at least part of the time after the Pandemic. Office space will be reconfigured to accommodate the hybrid model.

JPMorgan Chase told its employees in a memo to report back to the office by early July on a “consistent rotational schedule” that would allow staff some flexibility.

For landlords, these are existential questions as an enormous amount of office space is now vacant and available for lease in the US, and more office towers are in the process of being built, and nothing could have prepared the commercial real estate industry for this sort of sudden structural collapse in demand.