The promise of high-value services exports to rationalize globalization turned out to be fake.

Back when globalization by Corporate America was still a good thing, anxieties about the ballooning trade deficit in goods were medicated away with promises that exports of services – such as software, movies, and Wall Street efforts to financialize everything – would boom and balance out the trade. We’d buy cheap goods made in other countries, and they’d buy our expensive services, and it would all balance out. That was the rationale. Few economic rationales have failed more spectacularly.

Promised export boom of services turned out to be fake. 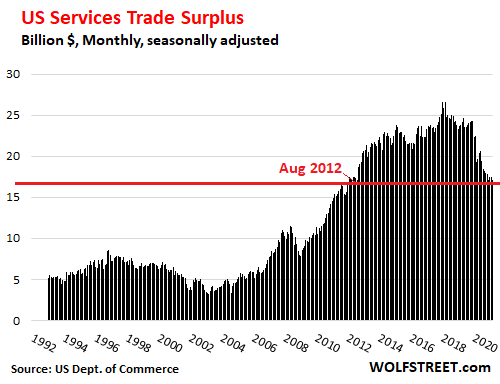 Exports of services, the American dream not-come-true, edged up from the prior month to $57 billion in March, but were down 20% from March 2019. These “exported” services include spending by foreign tourists in the US on lodging and travel expenses, and spending by foreign students on tuition, room, and board. Both have taken a hit during the Pandemic.

Imports of services ticked up from the prior month to $40 billion in March, but were down 17% from March 2019. The difference between exports and imports is the swooning and minuscule trade surplus in services. 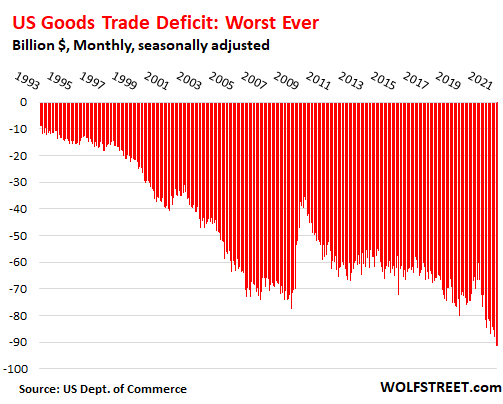 Juxtaposing the services surplus and the goods deficit on the same chart shows clearly what is going on: services surplus is small and has been shrinking since 2018 – the American dream not-come-true.

And the goods deficit is huge and has been getting worse, fired up by the stimulus payments that people spent on imported goods since most goods people can buy at many American retailers have been imported, or many of their components have been imported: 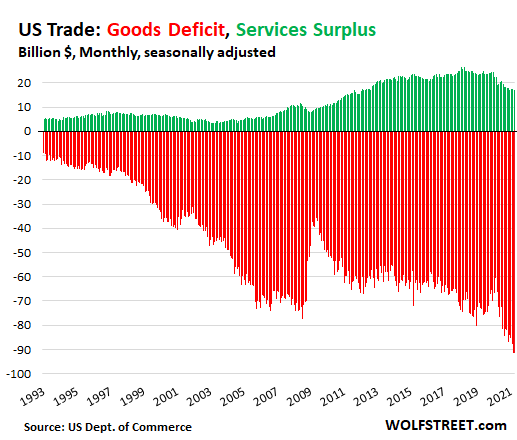 The US trade deficit in goods and services, after going from record worst to record worst, worsened by 5.6% in March from February to a new worst-ever $74.5 billion, 52% worse than in March 2019: 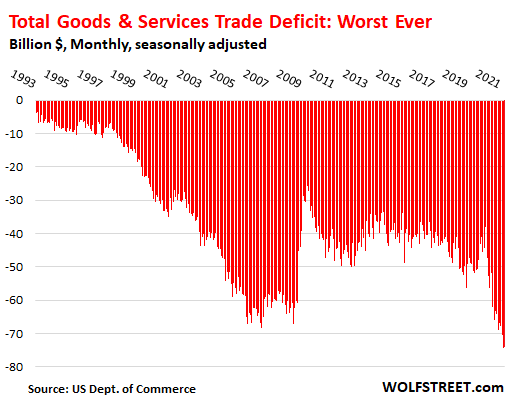 Note that during the Financial Crisis, the overall trade deficit improved substantially. Consumers cut back buying imported durable goods, while the trade surplus of services declined only briefly.

The opposite happened during the Pandemic where stimulus fired up US consumer demand, boosted foreign manufacturing, but did nothing for US exports.

Imports are a negative in the GDP calculation; exports are a positive. And Q1 GDP took a major hit from the ballooning record trade deficit.

Every crisis in the US over the past two decades has caused Corporate America to cut costs further by pushing offshoring to the next level. And after each crisis subsides, the trade deficits and US dependence on foreign manufacturing plants (no matter who owns them) are worse than before.

This dependence has become painfully obvious in some of the shortages, including the semiconductor shortage now rippling through the US economy. The US, which for decades had led the world in semiconductor design and manufacturing, now makes only 12% of global semiconductors.

The government’s and the Fed’s response to the Pandemic was a combination of stimulus payments and money-printing on a scale never seen before. And these stimulus payments and the wealth effect triggered by money printing – the ballooning asset prices – caused consumers to buy more goods, and fancy goods too, and so they bought more durable goods than ever before, triggering this WTF spike in consumer spending on durable goods, a big portion of which are imported, or their components are imported, the drivers of the worst ever trade deficit: 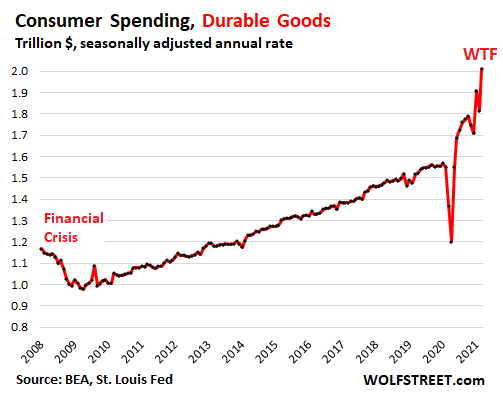