The primary culprit of the ballooning US trade deficit is being purposefully obscured: Corporate America

China is taking its propaganda on trade directly to the US. And “folly” seems to be the preferred official term. The four-page propaganda piece in Sunday’s Des Moines Register, “paid for and prepared solely by China Daily, an official publication of the People’s Republic of China,” as it said, was titled “Dispute: Fruit of a president’s folly” (image via Jennifer Jacobs of Bloomberg News): 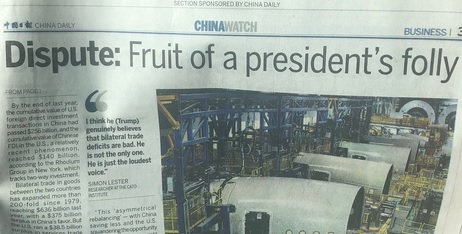 This was preceded by days of ping-ponging threats and counter-threats of tariffs and other measures.

“It’s time to take a stand on China,” President Trump told Fox News on Thursday. “We have no choice. It’s been a long time. They’re hurting us.”

On Friday, the Chinese government said that the US administration needed to “correct its mistakes” regarding its management of the trade dispute.

On Saturday, it emerged that China had cancelled scheduled trade talks, including a trip to the US by Chinese Vice-Premier Liu He.

Monday morning in Hong Kong, the South China Morning Post – which was acquired in 2015 by Alibaba Group in a clear effort to bring it in line with the priorities of the Chinese government – had this on its front page: 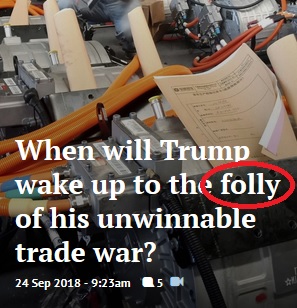 With all this activity going on, it’s easy to lose track of what is actually the issue. Trump is trying to deal with the huge and unsustainable US trade deficits that have ballooned over the past two decades. But it involves two groups of entities:

But Trump appears to be bungling this debate. This became clear some time ago when he was being bashed like a sitting duck from all sides on this issue: by Corporate America, China, the EU, other entities that would lose, and by their propaganda outlets in the media.

So on July 25, I sent a letter via the White House submission system. I never expected to get a real reply, figuring that at the most, a bot would handle this, and that, without anyone actually reading my text, I’d get a generic reply. In fact, I got two generic emails, one of which (Sep 13) was about Trump’s general goals on trade, written in the first person. “I will not tolerate unfair trade practices that harm American workers, farmers, ranchers, and businesses,” it said among other things. And it included an image of the President’s signature.

The reason I wrote the letter was to spell out what has gotten totally muddled by now: The dominant role of Corporate America and the US corporate tax code in the ballooning trade deficits.

The White House submission system imposes a tight limit on length; everything has to be whittled down to the bare bones. Hence the brevity. Here is the relevant part of my letter:

The two most important factors in the US trade deficits are:

Those two factors need to be separated – and be addressed separately.

Tariffs are a tax on Corporate America. You gave Corporate America a huge tax cut. Now it’s getting a tax hike. Let it squeal. Tax cuts and tax hikes need to be linked. It’s just a shift in where government revenues are coming from.

Tariffs are a “sin tax” – like taxes on alcohol. They encourage one type of behavior and discourage another. Since Corporate America is trying to maximize its margins, it will change its behavior and increase investments in US production in order to reduce the impact of tariffs.

Tariffs squeeze corporate margins because companies have a hard time passing them on: Prices in the US are always at the maximum level (market forces). GM threatens to slap $5,000 on its Mexican-built cars? Ha, it now puts huge rebates on its cars in order to sell them!

Corporate America has never passed tax cuts on to consumers or workers. The massive tax cut it received this year is getting passed on to top executives and shareholders. Why doesn’t it pass this tax cut, or at least some of it, on to consumers in form of lower prices? Because it doesn’t have to.

A similar logic, but in reverse, applies to tax increases. Walmart, which specializes in selling China-made goods, will always charge the maximum the market will bear, given its sales goals. Other retailers are the same. The auto industry’s supply chain goes all over the world, and tariffs are changing the equation of where it goes, and they’re changing cost structures – but prices in the US are set by market forces.

And this is where the trade debate has completely gone off the rails: It has by now obscured the primary culprit, Corporate America with its perennial search for cheap labor and other cost efficiencies, and its use of the US corporate tax code, which for decades encouraged corporations to use transfer pricing and other methods to keep profits offshore (what has become the pile of untaxed profits called “overseas cash”).

Tariffs don’t prevent trade. They just change the cost equation a little. In this manner, tariffs are a “sin tax” that provide a counter-balance and give Corporate America a different element to include in the equation. That part has gotten completely – and it appears purposefully – obscured by the White House, which is the most pro-Corporate America White House I can remember.

And the debate needs to shift to Congress, whose decision this should ultimately be.

For the rest – such as attacking China’s own policies and the uneven playing field in China – well, that’s long overdue, but it’s not the primary issue. The primary issue is Corporate America.