All bull markets come to an end, even the 35-year Great Bond Bull Market.

The US Treasury 2-year yield crept up 3 basis points during the week, to 2.81% at the close on Friday, the highest since June 2008. In a month or two, as the fourth rate hike for 2018 and more rate hikes next year are getting further baked in, the 2-year yield will cross the 3% mark! Just two years ago, many soothsayers on Wall Street said this would never happen again – that the Fed, in fact, could never raise rates to this point. But here we are.

The 10-year yield rose 8 basis points during the week, to 3.07%. This widened the spread between the 2-year and the 10-year yield on Friday to a still hair-thin 26 basis points. But it was up from 18 basis points on August 27, the low point so far in this cycle, and thus the yield curve has “steepened” a tiny bit. This chart shows that spread going back to 2007: 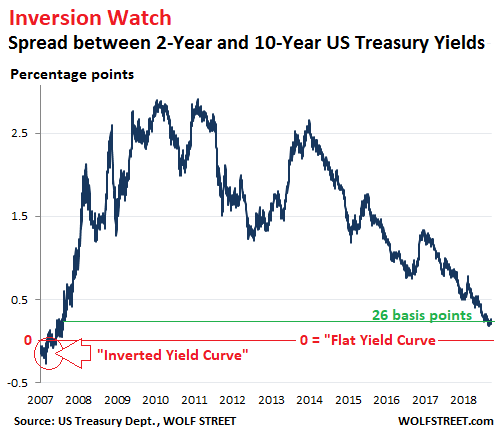 For periods in 2006 and 2007, the 2-year yield was higher than the 10-year yield, and thus the yield curve was “inverted.” At the left end of the chart, denoting 2007, the line dipped below zero. The Great Recession officially began in December 2007, by which time the yield curve was no longer inverted as the Fed had started cutting short-term rates. 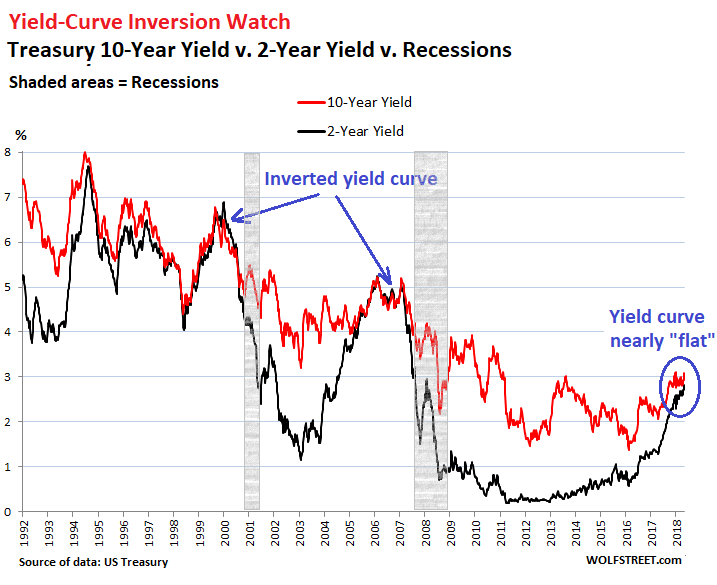 Starting in 2008, the Fed imposed its yield-repression policy on the Treasury market, thus totally manipulating the market. But since December 2015, the Fed has been “gradually” stepping away from those methods of yield repression. So the yield curve is not showing free-market behavior; it’s showing the Fed’s manipulations, and the side-effects of the Fed’s backing away from these manipulations.

There will be another recession. There always is at some point. A recession is an essential and necessary part of the normal business cycle. The only question is when – and the yield curve might no longer have a clue.

During the prior rate-hike cycles, the Fed raised much faster, and it was much more difficult for the 10-year yield to move out of the way of the soaring and over-shooting 2-year yield.

In this rate-hike cycle, the Fed is moving in slow-motion – everything is “gradual,” as the Fed has been ceaselessly pointing out – and the 10-year yield has a chance to keep limping ahead in spurts and starts.

If you squint a little as you look at the chart above, you can see that the 2-year yield soared 4 percentage points (400 basis points) in the three years from June 2003 through June 2006. The third year in this rate hike cycle will be complete in December 2018. And the 2-year yield will have likely risen from 0.99% in December 2015 to a little over 3% by December 2018, so a touch over 2 percentage points – or about half the speed of the last rate-hike cycle!

There is another thing to consider. The great bond bull-market started in October 1981. At the time, the 10-year yield peaked at just under 16%. Then yields fell (falling bond yields means rising bond prices). This bond bull market, with all its ups and downs, lasted till July 2016, when the 10-year yield bottomed out at 1.37%.

During these 35 years, yields dropped during each recession as the Fed cut rates, but then yields didn’t return to prior highs. Instead they wobbled from lower lows to lower lows. And after each recession, their peaks remained lower than their peaks before the recession.

But all bull markets come to an end, even the Great Bond Bull Market. And this dynamic of interest rates being lower after the recession than they’d been before it, in line with rates having fallen overall for 35 years, has likely fizzled, and rates overall won’t keep going lower. And those folks who expect that during the next recession, yields will fall below the low points in the past cycle will likely be disappointed.

Nightmare scenario for the markets? They just shrugged. But homebuyers haven’t done the math yet. Read…  Mortgage Rates Head to 6%, 10-Year Yield to 4%, Yield Curve Fails to “Invert,” and Fed Keeps Hiking

73 comments for “My Long View of the “Yield-Curve Inversion””