A distant possibility in early 2018 is making its way to reality.

The markets no longer have any doubts whatsoever that the Fed will raise its target range for the federal funds rate by a quarter point at its September 25-26 meeting to a range between 2.0% and 2.25%. This will be the third hike in 2018. Its probability is now 100% according to CME 30-day fed fund futures prices (chart via Investing.com, red marks added): 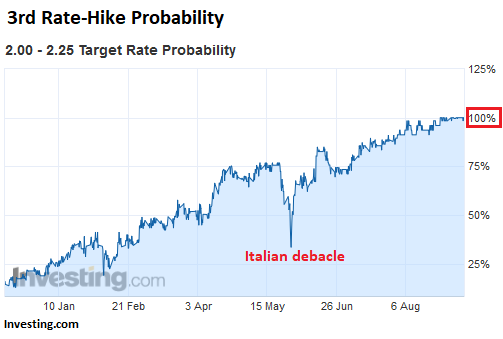 As is always the case, the closer the rate-hike date gets, the more confident the market is that there will be a rate-hike – unless some debacle happens.

The debacle that happened in late May – as you can see by the plunge in the probability of a third rate hike from 73% to 33% — was the Italian government bond debacle where bond prices plunged and yields surged. The 2-year Italian yield skyrocketed from the negative to 2.8% in 11 days. By comparison, it took the US two-year Treasury yield five years to accomplish a similar feat, and it still hasn’t moved quite that much, but is getting closer.

As soon as Italian government bonds fell off a cliff, expectations ballooned that the Fed would stop its rate hikes to calm the waters and prop up the markets. But the Fed just shrugged, and by mid-June the target rate probability of a third rate hike in September was in the 80%-range. Now it’s at 100%.

The fourth rate hike showed up on the table in February, at first as mere suggestion. A lot of observers were in the no-way camp. Some were talking about rate cuts, given the stock market declines at the time. But by now the idea of a fourth rate hike in 2018 has taken hold, and the FOMC meeting on December 18-19 is the likely occasion. This hike would raise the target to a range between 2.25% and 2.50%.

The target rate probability of the fourth rate hike rose from around 10% at the beginning of this year to 77.7% today, according to CME 30-day fed fund futures prices (chart via Investing.com): 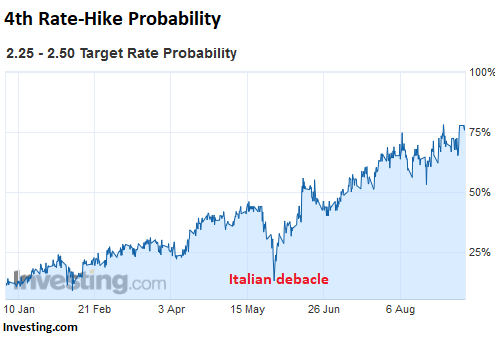 The federal funds rate is an overnight interest rate – the rate at which banks lend reserve balances to other banks overnight on an uncollateralized basis. The Fed tries to manipulate this rate into its target range with its open market operations (OMOs) by buying or selling securities in the open market. The resulting effective federal funds rate is currently 1.92%.

And what are Treasury yields saying?

The three-month Treasury yield today (September 10) is still outside the three-month perimeter of the December 18-19 Fed meeting and is not impacted by it. But at 2.14% today, it is mostly pricing in a rate hike at the September meeting, being right in the middle of the Fed’s post-rate hike target range of 2.0% to 2.25%: 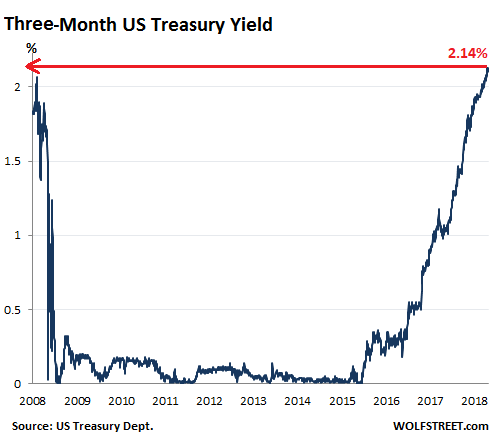 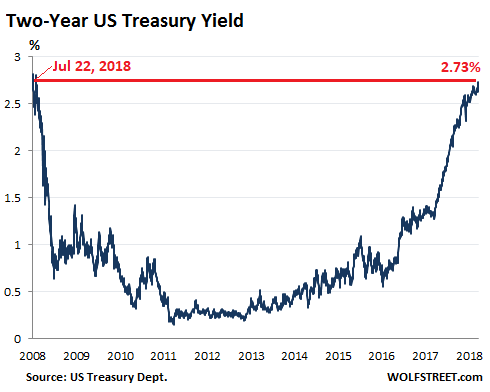 Since late 2016, when the Fed stopped flip-flopping, the Fed has studiously avoided springing surprises on the markets. Everything was telegraphed well in advance. By the time it arrived – rate hikes as well as the QE unwind – the market had already digested it. And this is likely the path forward in 2019.

But for 2019, the Fed has given itself more flexibility for more rate hikes, or differently timed rate hikes, by making all eight Fed meetings “press conference meetings,” not just four of them, as in 2018 and prior years. There has been a market expectation that this Fed would only raise rates at meetings with press conference, of which there have been four per year. But in 2019, all eight meetings will be followed by a press conference and will be “live” meetings. And this might indicate that the Fed doesn’t want the markets to be surprised by a surprise move.