Used car and truck prices in August at auctions in the US jumped 6.4% from a year ago, after having jumped 5.1% in July, according to the Manheim Used Vehicle Value Index. The index, at 139.7, hit the highest level in “its more than 20-year history.” 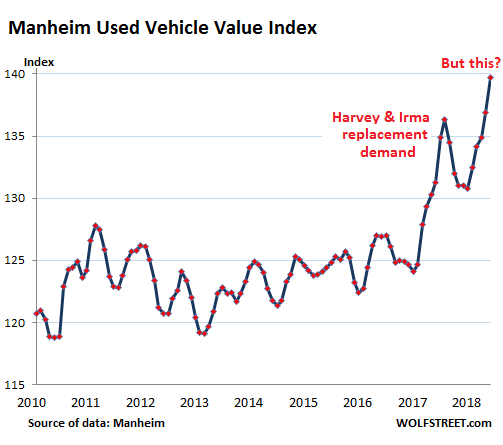 Looking at trends in weekly Manheim Market Report (MMR) prices, the abnormal summer bounce that started in June continued in August. As of Labor Day, 3-year-old vehicles are now worth 4.8% more than they would normally be worth had typical depreciation occurred instead of the appreciation observed this year.

The data from those auction sales is adjusted for mix, mileage, and seasonality.

The chart below shows the year-over-year price changes in the index. Toward the end of 2017, the surge in prices that peaked in October and November was ascribed to the “replacement demand” from Hurricanes Harvey and Irma. This demand then tapered off, having turned out to be much smaller than initially estimated. Now new factors are at work: 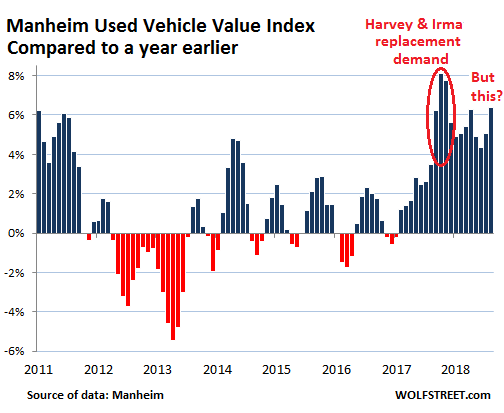 “The strange summer price appreciation in used cars” is a function of several factors, according to Manheim, including:

This increase in demand has been met by a “flattening wholesale supply,” which “has led to faster moving retail inventory, higher sales efficiency at auction, and higher prices.”

Sales of midsize and compact cars have collapsed over the past four years on the new-vehicle side across the industry as consumers have switched from cars to crossovers, SUVs, and pickups, to where Ford has thrown in the towel entirely on these cars and where GM is in the process of pulling out. But on the used vehicle side, midsize and compact cars are the hottest of them all with year-over-year price increases north of 8%: 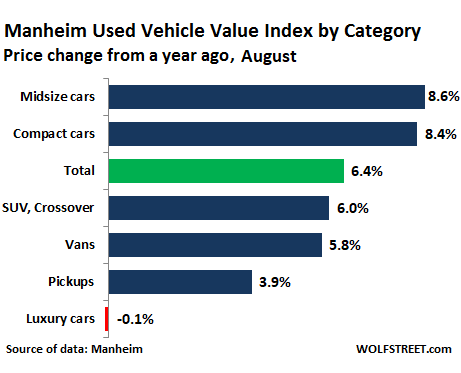 Except for luxury cars, all major vehicle categories experienced year-over-year price gains, but none more than midsize and compact cars because they, being priced lower, still allow consumers to deal with the affordability issues they face with crossovers and SUVs.

A rental car company can obtain its vehicles in three ways:

The rental car company sends its “risk vehicles,” after they come out of the fleet, to the auction or it sells them directly via its own retail operations (Enterprise is big into this).

Pricing of these “risk vehicles” at the auction jumped 8% in August year-over-year, Manheim found, even as the average mileage rose 4% year-over-year to 43,500 miles.

This mileage number is another sign of how vehicles are holding up better these days, and why the average age of vehicles on the road has been increasing over the years. Back in the late 1980s, rental cars were typically pulled with 15,000 to 20,000 miles on them. A rental car with 43,500 miles would have caused customer concerns. It would more likely have had reliability issues – taking care of customers whose rental car broke down is costly. And it would have looked iffy. But today, 43,500 miles is average!

Here is a structural shift with some significance for the auto industry. Read…  Automakers Take Note: Americans Are Changing How They Commute to Work

12 comments for “What’s Going On in the Used Car & Truck Market?”