A structural shift with some significance for the auto industry.

Since we’re keeping a keen eye on the auto industry, this trend could become meaningful.

In large urban areas where millions of people are trying to get to work every day, commutes can be long and stressful. As conditions go from awful to %#@*& terrible, people are trying to find alternatives – moving closer to work, taking mass transit, telecommuting, walking, etc. And driving, while still by far the top way of getting to work in America, has lost some ground.

Back in August 2007, 85% of adults with full-time or part-time jobs drove themselves to work; and another 6% rode to work with someone else (such as riding with the spouse, car-pooling, etc.). In total 91% got to work by car.

This is what Gallup determined in a poll, where it asked, among other things, this open-ended question:

How do you generally get to work – do you drive yourself, ride with someone else, walk, take mass transportation or something else?

The chart shows the percent of people who are getting to work by car (columns) – driving (black) and getting a ride (blue) – and using the alternatives (red line): 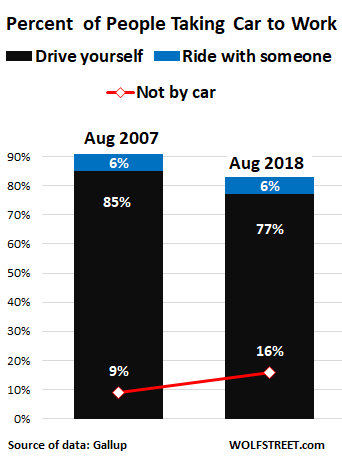 Clearly, none of the alternatives are taking Americans by storm just yet. Habits change slowly, but once things get miserable enough, even lousy alternatives can become more desirable.

These upticks in each category are small. But together, the small upticks add up, causing the percentage of people who’re driving to drop from 85% to 77% over those years. At this rate, the percentage might drop to something like 69% over the next decade. For automakers, this is not a propitious trend.

But for automakers, another dynamic has mostly countered this trend so far: Between 2007 and 2018, the US population has grown by about 25 million, to 327 million. And “nonfarm employment,” as defined by the Bureau of Labor Statistics, has grown by 11 million workers to 149 million. This is why congestion during commute times hasn’t gotten any better, despite the switch away from cars.

In the poll, Gallup also found that the average round-trip time has risen by 4.3 minutes over this period, from 48.1 minutes to 52.4 minutes. Gallup notes that the Census Bureau has found a similar increase.

That 4.3-minute-a-day difference, times five days a week, times 50 weeks a year, translates into 18 hours a year of additional commute on average.

The survey also showed that 21% of the commuters said their commute was “very” or “somewhat stressful.” But for people with long commutes, the percentage was far higher – and this makes intuitive sense:

The trends have been seen elsewhere: As commutes get longer and more stressful, and as traffic congestion gets worse, people, especially younger people, are looking for alternatives, and are organizing their lives around these alternatives, such as working at home some of the time or living in an apartment or condo closer to work – hence the high-rise residential building boom currently playing out in all major urban centers.

This shift is real. While the annual increments are small, spread over time, they will further impact the dynamics of the auto industry.

This might also be a contributing factor to the phenomenon of the rising average age of cars on the road. Here’s a deep dive based on the report by the Federal Highway Administration for 2017 compared to 2009. Read…  Average Age of Cars & Trucks by Household Income and Vehicle Type over Time

117 comments for “Automakers Take Note: Americans Are Changing How They Commute to Work”