As with all “bleeding edge” technologies, the challenges are huge, and it’s possible they may end up derailing the whole venture.

In September 2017, a consortium of Norwegian firms, including Yara International, Vard, and Kongsberg, announced that they’d start testing the hull design of the YARA Birkenland at a test-tank facility in Trondheim. When finished, it will be a rather small ship – 3,200 Dead Weight Tonnage (DWT) – but it made big waves around the world: It will be the first fully autonomous ship to enter commercial service (image via Kongsberg Maritime).

Later this year, according to the timeline set by the developers and the regulators (led by the Norwegian Coastal Administration), the unfinished hull of the YARA Birkenland will be towed from the Vard shipyard in Braila (Romania) to the Vard facilities in Brevik (Norway) to be completed. The shakedown cruise and first testing of autonomous capabilities are scheduled to start in 2019. In 2020, the ship will be delivered as a manned cargo, with more capabilities being gradually transferred to the shipboard systems until fully autonomous capacity is reached in 2022.

The ship will feature a superstructure to house the crew which will be removed when regulators clear it for completely autonomous operations, further adding to “the future as seen from the past” look of the ship.

That’s the plan, and it’s a bold one.

The ship will be fully electric and will feature many advanced solutions, such as fully automated loading and unloading equipment, a permanent ballast (consisting of the batteries), and automated mooring systems. In short, if everything goes according to plan, this ship will be able to carry cargo between three Yara facilities along Southern Norway without human intervention.

While most of these features have been trialed before, this is the first time they are not just integrated in a single ship but put into revenue-generating service and hence expected to perform reliably in a real-world environment.

The all-electric propulsion system was chosen following negotiations with the Norwegian government. The first design choice was to use liquefied natural gas (LNG) as fuel (either in a gas turbine or two-stroke diesel engine), but regulators thought this was going too far. More importantly, the use of an electric propulsion system allowed Yara to access funding from the Norwegian government which will go towards covering part of the development costs.

So far, the project has been subsidized to the tune of NOK133 million ($15.7 million) but more funding will be made available in the future.

As is the case with all projects filled with “bleeding edge” technology, there are bound to be problems, and it’s even possible these problems may end up derailing the whole venture. If this happens, remember an old saying: You can recognize the pioneers by the arrows stuck in their backs.

But even before the YARA Birkenland scale model had been shipped to Trondheim to start testing, the whole world was whipped into what I call “autonomous ship frenzy,” with symposia being organized and widely advertised, chiefly to pitch the technology to potential investors and analysts, and stories full of hyperboles were predicting whole fleets of autonomous ships sailing the oceans in a few years.

Less advertised has been the formation of a Japanese consortium sponsored by the Japanese government and led by Mitsui O.S.K. Lines (MOL), which includes fellow Mitsui companies such as Akishima Laboratories and Mitsui Engineering & Shipbuilding, the Tokyo University of Marine Science, Nippon Kaiji Kyokai (ClassNK), and government agencies such as the National Institute of Port, Maritime and Aviation Technology, which will focus on a number of separate projects as part of the Ishin NEXT program, including:

All these projects are to be integrated at a “later date” into the so-called “MOL Smartship,” a futuristic cargo ship which perhaps wisely MOL doesn’t advertise as being fully autonomous.

At the moment, this is by far the most ambitious program. Everybody agrees it’s bound to cost “a lot of money,” but nobody has any idea how much: As it often happens with government-sponsored programs in Japan, massive cost overruns are, if not exactly a given, at the very least expected.

Some of the technology Kongsberg is developing for the YARA Birkenland will be employed to assist, not replace, ferry crews on the Horten-Moss route starting in September 2018. Ferries are vital along Norway’s rugged coastline and innumerable isles, not merely to transport vehicles but also all kinds of goods, from foodstuff to construction equipment.

Kongsberg is purposely opaque on the exact nature of this technology, but it’s safe to assume this technology will make use of GPS/GLONASS data and LIDAR (LIght Detection And Ranging) to help mooring operations; and data from onboard sensors will contribute to autonomously regulate engines and improve fuel economy.

Robert Allan Ltd, a Canadian ship engineering firm specialized in harbor service vessels, is presently working on a “technology demonstrator” to test solutions which could be used on a future crewless fireboat.

Firefighting is dangerous business even with the best training and equipment. With LNG becoming more common aboard ships, both as a cargo and as a fuel, there will be a whole new set of challenges to the brave and hardy people manning fireboats and firefighting tugboats, or Fifi, as they are collectively and affectionately nicknamed in the business.

The Robert Allan concept does not call for a completely autonomous Fifi governed by computers. Though many systems will be self-governing, the fireboat will be remotely controlled by humans in a control center. The challenges are huge. Just think about providing the control center with effective situation awareness while an oil tanker is burning and half a dozen fireboats are dousing it with thousands of cubic meters of water. But the benefits could be equally huge, especially considering the boundaries between fireboats and harbor tugboats are very thin these days.

Robert Allan has also partnered with Rolls-Royce Marine to trial remote operations: A harbor tugboat owned by Svitzer (part of the A.P. Moller-Maersk group), which partly financed the test run, was modified to allow a single crew member to pilot the tugboat inside the Copenhagen harbor. In spite of the PR blitz, the test was very short and hasn’t been repeated yet: The tugboat undocked from the quay, turned 360°, passed in front of the Svitzer harbor offices for a photo session, and returned to the quay. Danish marine authorities allowed the test on conditions the tugboat carry a full crew and that autonomous mode could be manually deactivated at any moment. Again: no chances are taken here.

UK yacht manufacturer Hushcraft is developing the SEA-KIT technology demonstrator under a program financed by Royal Dutch Shell and by the Nippon Foundation (image via Hushcraft): 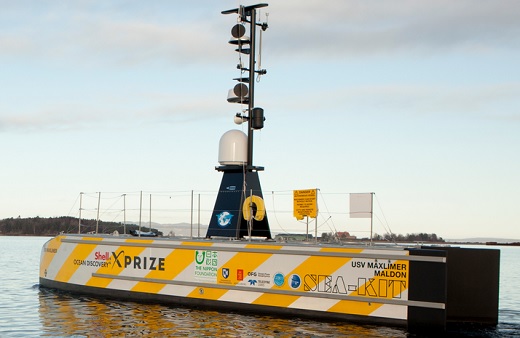 This vessel is designed as a mothership for an AUV (Autonomous Underwater Vehicle), a mini-submersible originally developed for military applications but which, given the tepid interest by navies worldwide, has been adapted for underwater mapping and exploration purposes. Royal Dutch Shell, a world leader in deep-water exploration, has a strong interest in deploying these vehicles to map seafloor features which may be used to narrow down the location of exploitable deep-water hydrocarbons. Search operations such as those undertaken to discover the wreckage of the ill-fated Malaysia Airlines flight 370 are also touted as another possible task.

These AUVs – or “robosubs” – go back to 1965, when six “fishes” as they were called, were ordered from Westinghouse by the US Navy for the first-generation nuclear submarine USS Halibut (SSGN-587), which was being covertly transformed into an intelligence gathering platform. Each of the hand-built fishes cost $5 million, an enormous sum in 1965, and had been covertly financed using “cost overruns” in other programs, most of them fictitious and created exclusively to leech funds for the Halibut conversion. Alas, as the Navy was understandably reluctant to lose any of them in action, they were tethered to the USS Halibut by a 7-mile-long steel cable.

A final word of caution. It will be many years before truly autonomous ships will take to the seas: Even if the YARA Birkenland project proceeds smoothly and according to schedule and regulators don’t get cold feet for one reason or another, the ship will be limited to a 12-nautical-mile coastal route while being remotely monitored by two or three control centers (the exact number is still to be decided). Any accident will negatively impact the whole venture; public opinion appears to be very sensitive about autonomous vehicles even as the hundreds of accidents involving ships with a human crew worldwide each year seem to fly below the radar.

Specialized semi-autonomous vessels, such as remotely controlled fireboats, may enter limited service in a relatively shorter time, but one always needs to remember what ultimately drives automation: money. As long as humans can do a given job for less money than a machine, automation remains in the realm of science fiction. By MC01, a frequent commenter on WOLF STREET.

In the iron-ore trade, everything revolves around ships and China. Read…  The Largest Ships in the Huge Iron-Ore Trade