A deep dive based on the report by the Federal Highway Administration for 2017 compared to 2009.

When I entered the auto industry in 1985, there was a lot of hand-wringing about the average age of vehicles in operation in the US. After a brutal recession, it had jumped to 7.9 years, from 6.9 years in 1980. But everyone knew consumers would trade their old clunkers for new vehicles; it would bring the average age back to normal. That was the myth of “pent-up demand.” For a while, the average age hovered just below 8 years – trucks getting older, and cars, the dominant vehicle type at the time, getting a little younger. But in 1992, the average age rose to 8.1 years, and by 2017, it reached 11.7 years.

This chart shows the average age by “car” and “truck” (SUVs, car-like compact SUVs, pickups, and vans). Note how the difference between the two categories has disappeared: 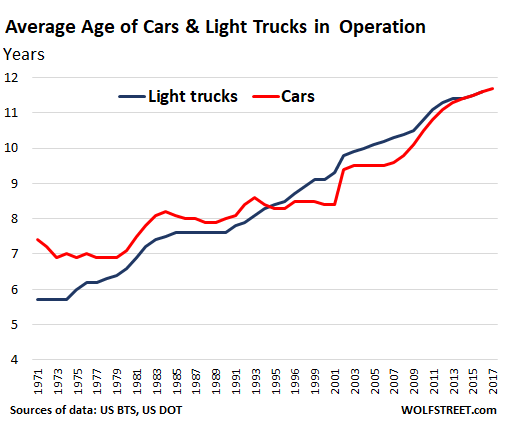 The above data of the average age of “vehicles in operation” is based on registrations. There is a second and slightly different but more detailed data set that tracks vehicles owned by US households, based a survey of households that the Federal Highway Administration conducts periodically. It just released the 2017 results. It has conducted eight of these surveys since 1969. The prior survey was for 2009, conducted shortly before the cash-for-clunkers program removed a generation of the oldest vehicles on the road. 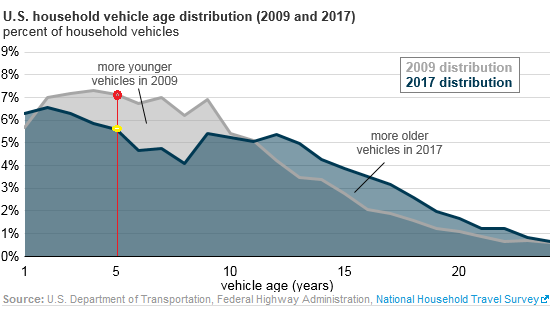 The classic distinction between “cars” and trucks” that still haunts auto-industry reporting has by now become largely meaningless as “trucks” include most vehicle types that Americans drive: SUVs, compact SUVs which are essentially cars that are a little higher off the ground, pickups, and minivans. So the EIA split out the average age by more meaningful vehicle types. The average age rose in all vehicle types between 2009 and 2017, ranging from an increase of 0.4 years for “other light trucks” to an increase of 2.4 years for pickups: 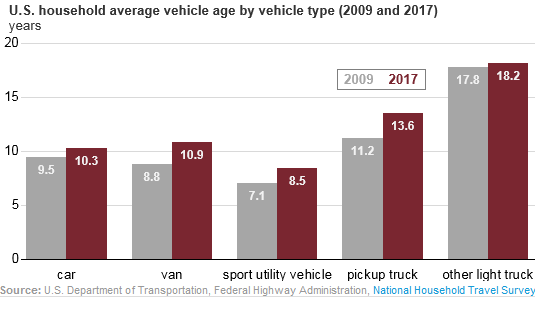 The average age for “other light trucks” is quite something: an average age of 18.2 years means that a considerable portion of these vehicles are over 25 years old! 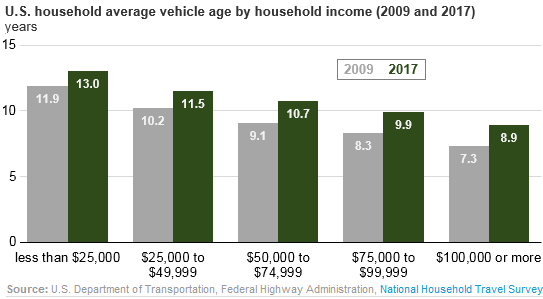 As in 1985, the industry is still fretting about this average age. It translated into lost sales for automakers. But this is largely a result of improved quality. Vehicles last a lot longer than they used to. A well-maintained 10-year-old vehicle with 150,000 miles on it today can look very good and have practically no problems, and getting rid of it is mostly a question of preference, and not of necessity. And then it might be replaced with a recent-model used vehicle!

And there’s another reason for the aging of the US vehicle fleet: Prices of new vehicles. This has ignited a boom in the vast used-vehicle market in the US. As “affordability challenges” hit new vehicles, consumers switch to used vehicles, prices spike to record, and inflation psychology sets in. Read…  What’s Going On in the Used Car & Truck Market?