House prices spiked further in some cities, including by a crazy 32% year-over-year in Phoenix. In other cities, price increases slowed. In the Boston metro, house prices remained flat for the second month in a row. And in the San Francisco metro, condo prices fell for the third month in a row. That’s the range, according to the S&P CoreLogic Case-Shiller Home Price Index today.

The overall National Index ticked up 0.9% for the month, whittling down the year-over-year increase to a still ridiculous 18.8%, the smallest increase since June. “Slows further,” is how S&P CoreLogic described this situation. The time frame: today’s “November” data are a three-month moving average of closed sales that were entered into public records in September, October, and November.

Los Angeles metro: Prices of single-family houses rose 1.2% in November from October, and by 19.0% year-over-year: 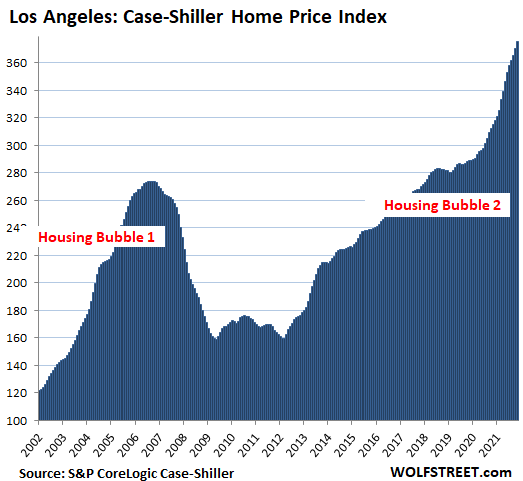 The Case-Shiller Indices were set at 100 for January 2000. The Los Angeles index value of 375 means that prices in the metro have risen by 275% since January 2000, including the Housing Bust in between. By comparison, over the same period, the Consumer Price Index (CPI) is up by 65%.

This 275% price surge since January 2000 makes Los Angeles the Number 1 most splendid housing bubble on this list. But there are other metros on this list where prices have spiked much faster on a year-over-year basis in 2021. The charts below are on the Los Angeles scale to show the relative house price inflation in each market. 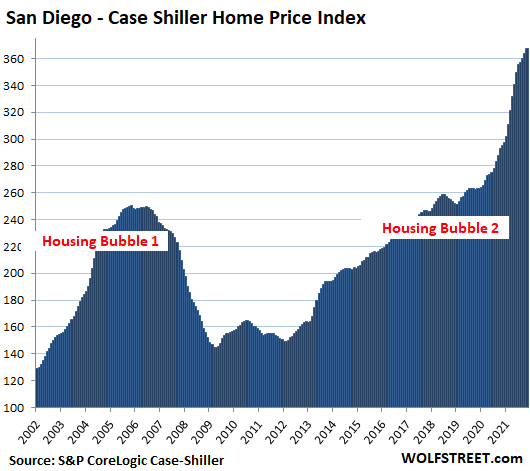 The dollar is losing purchasing power with regards to houses. The Case-Shiller Index is based on the “sales pairs method,” comparing the sales price of a house when it sells in the current period to the price of the same house when it sold previously. It includes adjustments for home improvements and the passage of time since these sales pairs can be decades apart. By tracking the price of the same house, it tracks how many dollars it takes to buy the same house over time, thereby tracking the loss of the purchasing power of the dollar with regards to houses. In other words, it tracks house price inflation. 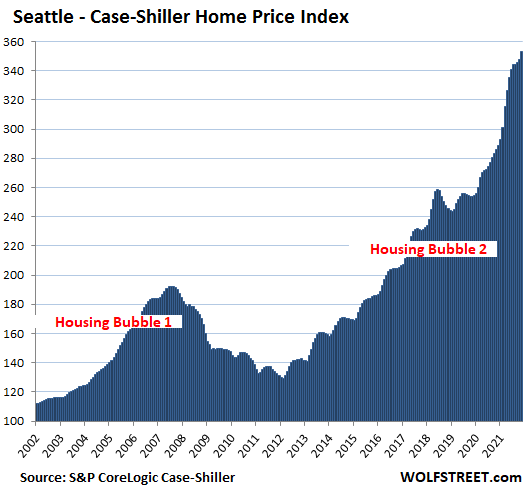 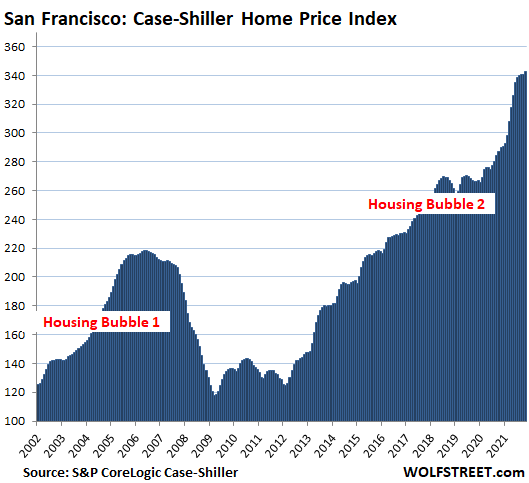 San Francisco Bay Area: Condo prices fell 0.3% for the month, the third month in a row of declines. For the past six months, prices have gone essentially nowhere. This reduced the year-over-year gain to 7.7%. Since June 2018, condo prices have risen just 4.1%: 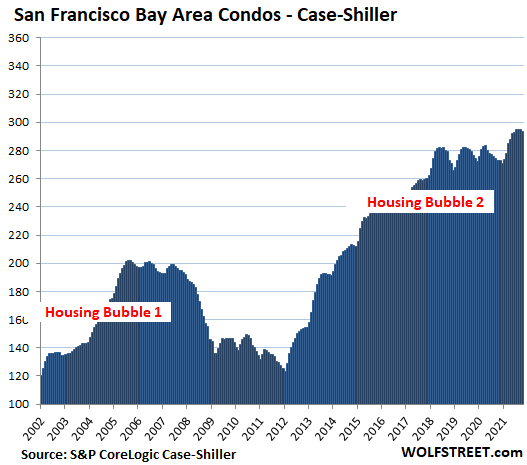 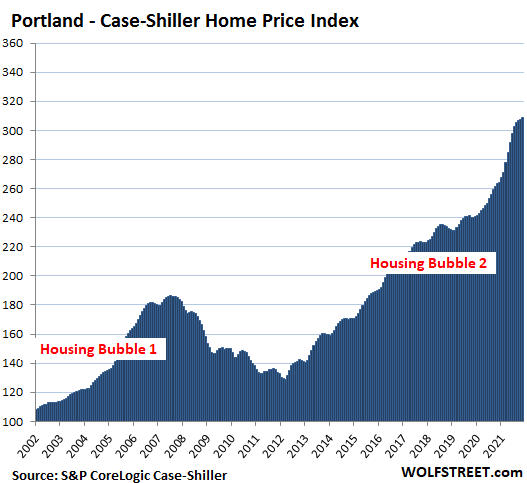 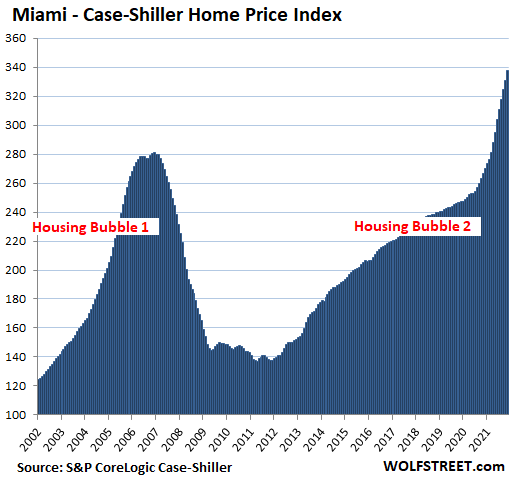 Washington D.C. metro: House prices rose 0.5% for the month, after two months of slight declines. This trimmed the year-over-year gain to 11.1%, the slowest since February, and developing a flat spot on top, the first since 2019 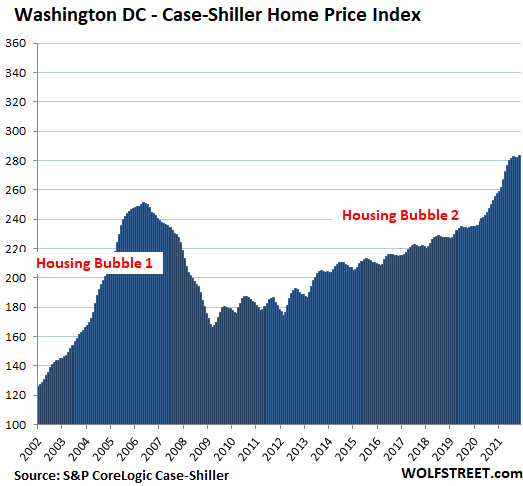 Boston metro: House prices were flat for the second month in a row, which trimmed the year-over-year gain to 13.5%, from 18.7% in July, and created the first flat spot since the second half of 2019: 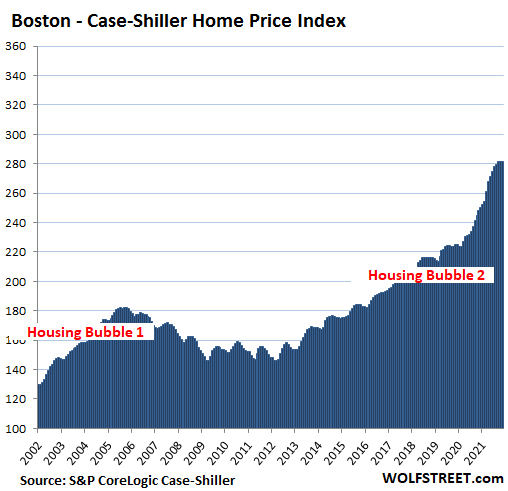 Tampa metro: +2.1% for the month, and +29.0% year-over-year, a new record year-over-year spike in this market, out-spiking the craziness during Housing Bubble 1: 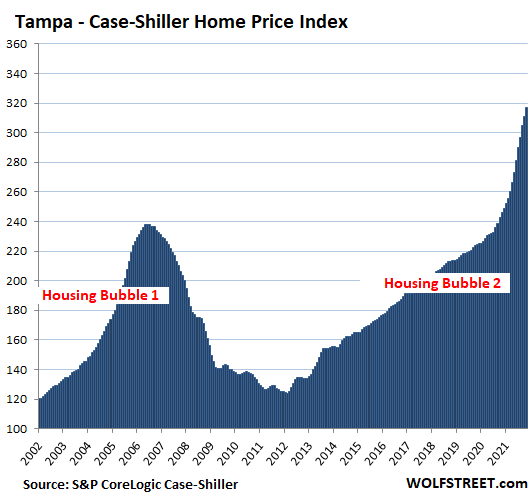 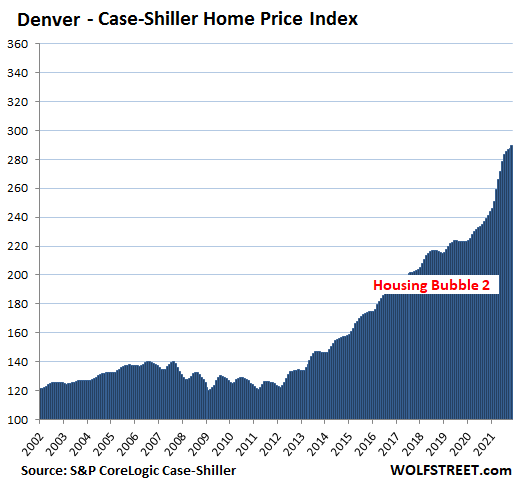 Phoenix metro: +1.2% for the month. November and October had the slowest month-to-month spikes since July 2020. Year-over-year: +32.2%, out-spiking the peak of Housing Bubble 1, and the red-hottest spike in this line-up of the most splendid housing bubbles: 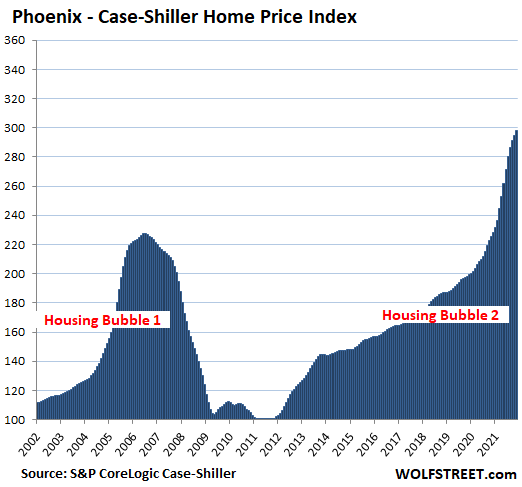 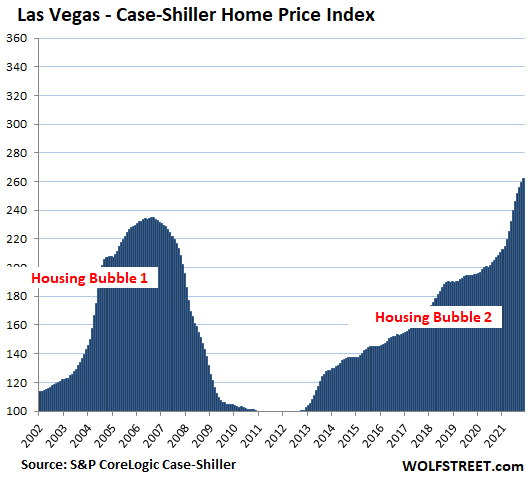 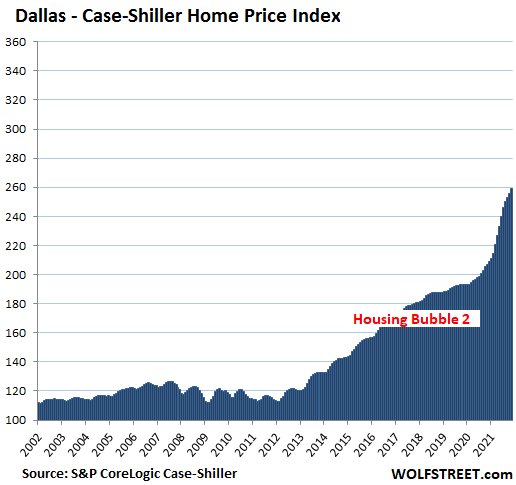 New York metro – what Case-Shiller calls the “New York Commuter” consisting of New York City plus numerous counties in the states of New York, New Jersey, and Connecticut from which people commute, or used to commute into the City. 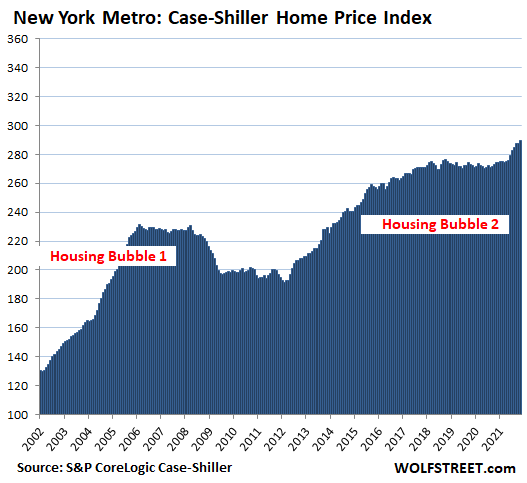 The remaining metros in the 20-metro Case-Shiller Index – Atlanta, Charlotte, Chicago, Cleveland, Detroit, and Minneapolis – have house price inflation since 2000 that has been substantially less than 150%, and so they don’t yet qualify for this list of the most splendid housing bubbles.

270 comments for “The Most Splendid Housing Bubbles in America, January Update: Starting to Look Like a Mixed Bag”