Stocks are down ferociously at midday today, with the S&P 500 Index down 3.8%, the Dow Industrial Average down 2.7% and the Nasdaq Composite down 4.5%. This follows a large-scale and widespread and relentless selloff that for the Dow and the S&P 500 started on the second trading day in January; and for the Nasdaq in November. By this morning, the Nasdaq was down nearly 20% from its intraday high in November.

By Friday at the close, the S&P 500 Index had dropped through the 200-day moving average, and combined with a huge mega-boom of the type stocks had experienced after March 2020, is not a common occurrence, and in the past has been followed by serious selloffs and crashes. By this morning, after the steep losses, the S&P 500 Index was down 12% from its high. This all came in the span of three weeks, with each week having been a loser.

The Nasdaq and the Russell 2000 fell into the negative for the 12-month period, having surrendered all of their gains plus some that they’d obtained over the prior 11 months (gray line). The Dow is still up 10.7% (brown) and the S&P 500 is up 12.8% (purple) for the 12-month period, having surrendered in three weeks about half of their huge gains of the prior 11 months (index data via YCharts): 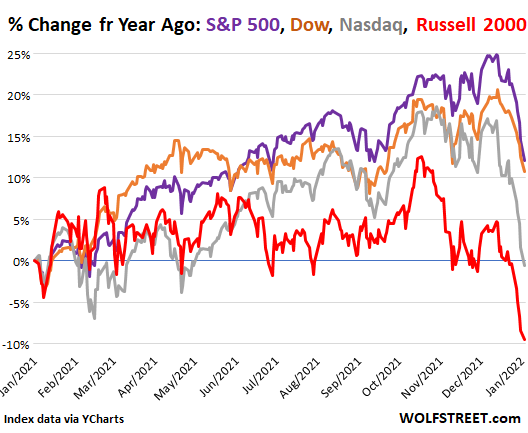 These kinds of sudden widespread losses day after day, week after week, are screaming for a bounce.

Any bounce would do. Whether this would be what traders call a “dead-cat bounce” that then leads to more losses, or the beginning of something new, well, we’ll see. But there needs to be a bounce. There always is.

Traders are always eager to pick the bottom of the drop if for nothing else but a brief and violent ride up because the craziest rallies occur during the pauses in broad sustained sell-offs, and so they dive in, and they’re buying what others are selling. And for days and weeks, these dip buyers got carried out on stretchers. But some day, there must be a bounce.

This selloff has been particularly brutal for holders of many most-hyped meme stocks, SPACs, and IPO stocks that have collapsed by 60%, 70%, 80% and some by 90% from their highs. And dip buyers were relentlessly beaten up.

And there better be a bounce soon or else I will have to revise the WOLF STREET dictum, immortalized on our beer mugs: “Nothing Goes to Heck in a Straight Line”: 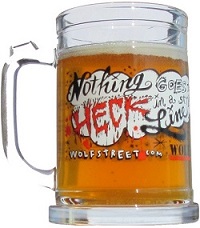 Here are the 10 biggest losers at midday in the S&P 500 Index and their declines from their 52-week highs:

No matter what happens to the market over the next few weeks or months or years, one thing we know for sure for sure, Nothing Goes to Heck in a Straight Line, so to speak. That’s my story and I’m sticking to it. And we’re due for a bounce that could make your ears ring.

316 comments for “Stocks Better Bounce Soon or Else I’ll Have to Revise the WOLF STREET Dictum, “Nothing Goes to Heck in a Straight Line””