The pandemic just accelerated the structural change by a quantum leap. The number of movie tickets sold in the US have been on the decline for nearly two decades, despite population growth. They’ve gotten hammered by how Americans increasingly watch movies: at home. A slew of competitors with their own studies and streaming services have sprung up, such as Netflix and Amazon. Movie theater ticket sales peaked in 2002 at 1.58 billion tickets. By 2019, sales were down by 22% from the peak, with 1.23 billion tickets sold. Then came the pandemic, and in 2020, amid the lockdowns, ticket sales collapsed. 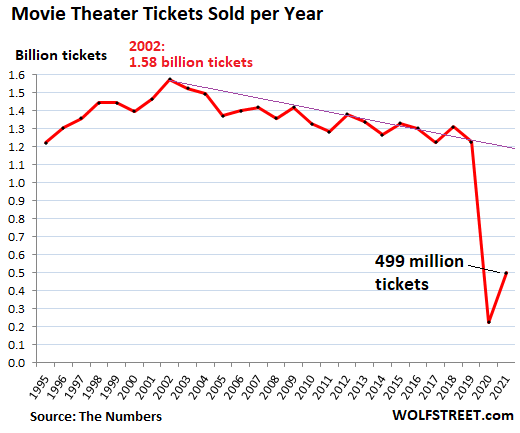 We could guess what’s in store for the overall US movie theater industry in 2021, based on what its largest player, AMC, reported so far for 2021.

AMC’s revenues from just ticket sales in Q3, despite the hugely hyped Labor Day weekend blockbuster numbers of “Shang-Chi and the Legend of the Ten Rings,” plunged by 47% from Q3 2019, to $425 million.

For the first three quarters of 2021, AMC’s revenues from ticket sales plunged by 70% from the same period in 2019, to just $728 million. And movie theaters were open in Q3 – those that were still around.

In Q2 last year, AMC became infamous in the history of movie theaters for having sold more shares than movie tickets, as it’s trying to fund its huge losses, and as the meme-stock crowd was a lot more excited about buying its shares and driving up their prices than about buying movie tickets.

In Q3, AMC’s total revenues from all activities, despite the superbly touted Labor Day weekend success, were still down by 42% from Q3 2019.

In early January 2021, with bankruptcy being a real possibility, AMC’s shares were trading in the $2 range. Then the meme-crowd got a hold of them, and the price spiked amid ridiculous volatility to over $72 a share intraday on June 2, with a closing high of $62.55 that day. And to its credit, AMC was selling a huge number of shares in Q2, at huge prices, to whatever gullible meme-stock jockeys were out there.

They should have gone to the movies instead. At least they would have had some fun. On Friday, AMC’s shares closed at $17.97, the lowest since May, and down 75% from the intraday peak. These escapades, at the expense of its gullible meme-stock fans, allowed AMC to raise large amounts of money that it can now burn. 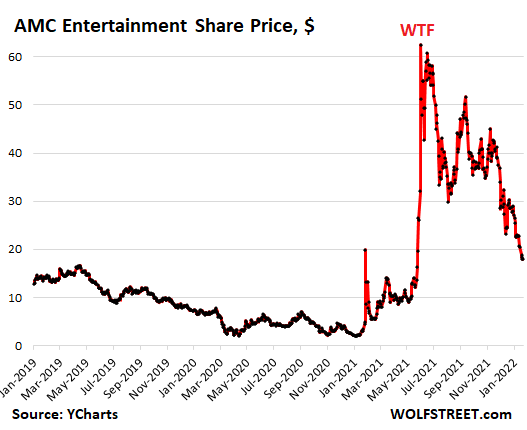 Over the years, movie theaters countered the structural decline in moviegoers by jacking up prices of tickets and popcorn and sodas, and by offering big comfortable chairs to justify the higher prices. They installed bars to sell overpriced food and beer. Fewer people went to the movies, but each spent more.

Box office revenues kept growing as higher ticket prices made up for lower ticket sales, and that sort of worked: In 2018, box office revenues rose to a record of $12 billion. But they declined in 2019 by nearly 6% and collapsed in 2020.

In 2021, box office revenues produced an uptick from the collapsed lockdown levels in 2020 but it wasn’t nearly enough: At $4.6 billion, box office sales were down by 50% from the long-gone year 2002: 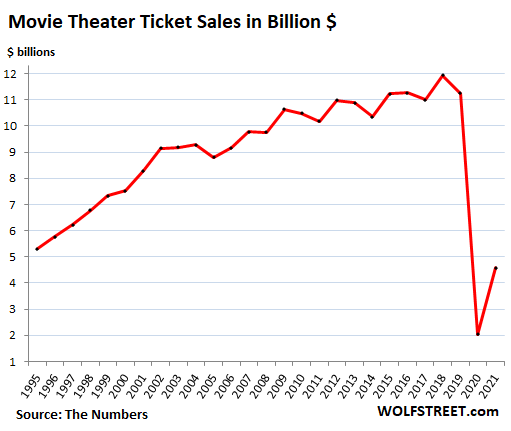 The structural issues for the movie theater business are huge: Those issues now include the streaming channels that the movie studios have set up to sell new releases directly to consumers. During the pandemic, movie studies have shortened and outright abandoned the theatrical window that used to give movie theaters a monopoly on showing new releases for three months. The theatrical window was forced on consumers to benefit movie theaters. Given a choice, as is now quite often the case, lots of people ended up watching the new release at home.

“Spider-Man: No Way Home” was the number 1 top grossing movie in 2021, with gross revenues of $614 million. And that was a big success.

What matters to movie theaters these days are blockbusters, because theaters are getting their clocks cleaned on the lesser fare that people now watch routinely at home streamed from numerous services and studios, including Disney, Amazon, and Netflix.

But blockbusters – if sufficiently hyped – still draw people to theaters, even though not enough people. The strategy of “blockbusterization” of the movie business has been in effect for years. The result is a few huge blockbusters that studios and theater chains hype into the sky, and declining overall movie theater attendance as people watch the rest at home.

And given the dominance of streaming in the overall movie business, blockbusterization is a gamble designed to battle streaming and draw masses of people to the theater. But a few blockbusters alone simply aren’t enough to fill theaters.

Here are the blockbusters – the top 10-grossing movies – in 2021, according to data provided by The Numbers:

88 comments for “Despite All the Hype, Movie Theater Ticket Sales in 2021 Down 68% from 19 Years Ago. AMC Shares Collapse from WTF Spike”