It should just forget about selling movie tickets, and stick to selling its shares to future meme-stock billionaires.

Just briefly here, because the fawning financial-media coverage was so funny. “AMC Entertainment’s Revenue Surges as Moviegoers Return to Theaters,” the Wall Street Journal wrote this afternoon. Similar fawning headlines were repeated elsewhere in the financial media. And that’s hilarious because – you guessed it – the “base effect.”

So yes, AMC, reported earnings this afternoon, or rather another huge loss, and revenues surged from near zero in Q2 2020 to $445 million in Q2 this year. But however much “surging” this was doing, thanks to the base effect, meaning that the base of the year-over-year surge was near zero a year ago, revenues were down by over 70% from Q2 2019 ($1.51 billion). This is all that the “pent-up demand” could produce: 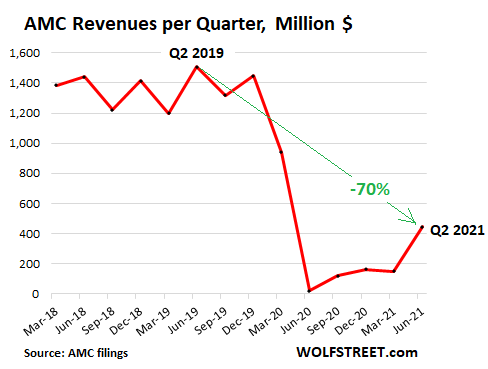 AMC sold just 22 million tickets in Q2, down 77% from the 97 million tickets it had sold two years ago. But it is good at selling overpriced sodas, popcorn, and snacks, in total $162 million in Q2, accounting for 36% of its total revenues; and it also sold screen advertising and other things for another $50 million.

These $445 million in total revenues generated $343.6 million in net losses.

But that “theatrical window” was crushed under the leadership of Disney, and now Disney and other studios are releasing at least some new movies simultaneously on their own streaming services. Theaters lost their three-month monopoly.

And consumers have a choice, with some of them choosing to go to the theater, but with the vast majority choosing to watch it at home. Consumers are loving this choice. For example, Disney’s “Black Widow” was hugely popular on Disney+ but its simultaneous theatrical release fizzled.

That three-month monopoly was the business model of movie theaters. It was based on the notion that theaters could thrive by depriving consumers of choice. That’s precisely what monopolies do. Now this business model has gotten crushed.

But AMC sure sold a heck of a lot of shares in Q2: While it sold only 22 million movie tickets, it sold 63 million shares of its meme stock, via three share offerings, including the private placement to Mudrick Capital.

These share sales diluted the shareholders to smithereens, but it doesn’t really matter because AMC has been losing huge amounts of money and only the losses got diluted, and no one complains about that, and any hopes of showing consistent net profits are slim.

But the cash it raised from those share sales allowed AMC to avoid bankruptcy, which it had been dangling out in front of investors in late 2020. And this cash is now getting burned in its cash-burn machine.

AMC’s creditors, which will be paid from the proceeds of those share sales are ecstatic. That’s how capitalism is supposed to work: Take money from a new set of investors to pay an old set of investors.

AMC should just admit that its new business model, as meme stock where anything goes, is to sell shares at meme-stock prices to whoever wants to become a meme-stock billionaire, and abandon any ambitions it might accidentally still have to fill its theaters. That time is over.