In the current era of Stimulus Good Times, with its huge kinks.

Small businesses are tough. Many disappear quietly. Hiring is an issue. Due to the limited resources, small businesses have trouble competing with large corporations in terms of pay, benefits, glitzy workplaces, and LinkedIn glamor. But in the current era of the Stimulus Good Times with its huge kinks, labor issues hit records – the weird phenomenon of 13 million people claiming unemployment compensation while companies are having trouble hiring.

In addition to a slew of labor issues, small businesses face inventory shortages. And they responded to the challenges where everything costs more – including their labor – by raising prices in record numbers, according to data from the NFIB, the largest trade organization in the US for small businesses.

Of the small businesses, 46% reported that they had job openings in June that couldn’t be filled, the second highest in the NFIB’s data going back to 1986, just below the record in May: 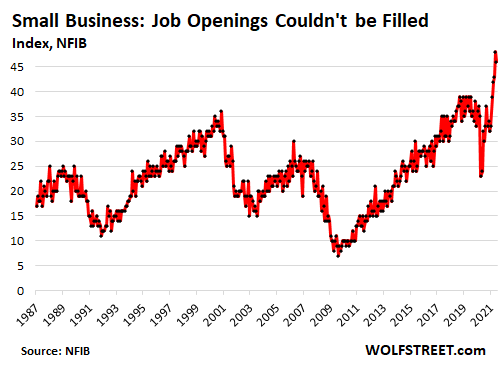 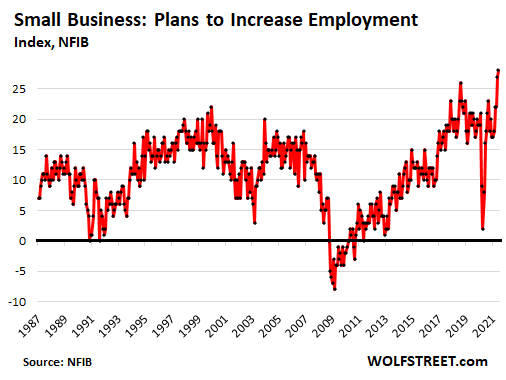 And they have been raising compensation. In June, the compensation index jumped to an all-time high. The index tracks the net of increases minus decreases over the past three months. It shows that small business owners are straining to add and retain staff: 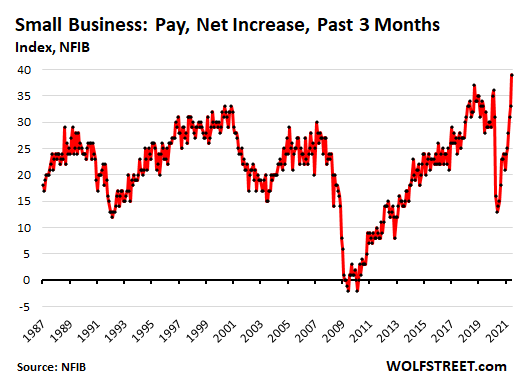 The top problem that owners said their businesses faced was the “quality of labor” they were able to attract.

Over half of the owners said that they get “few or no qualified applicants” for the job openings they have. For small businesses, this issue is always high in hot labor markets, but it’s much less of an issue when then the labor market tanks sending high-quality labor looking for jobs.

The difficulties small businesses have in retaining and adding staff, given the aggressive hiring practices by larger companies that a small business might not be able to compete with, is shown in the index for actual net increases of employment, which has remained slightly negative for the past two months, as these businesses are even having trouble hanging on to their staff: 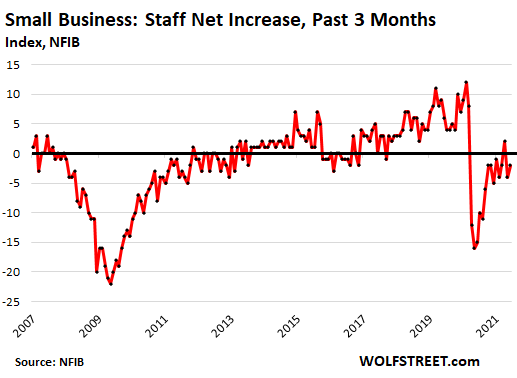 And small businesses have raised their prices over the “past three months” at a pace that spiked far beyond all prior periods in the data going back to 1986. The survey data doesn’t extend back to the high-inflation days of the late 1970s and early 1980s, so we lack that reference. But this is huge: 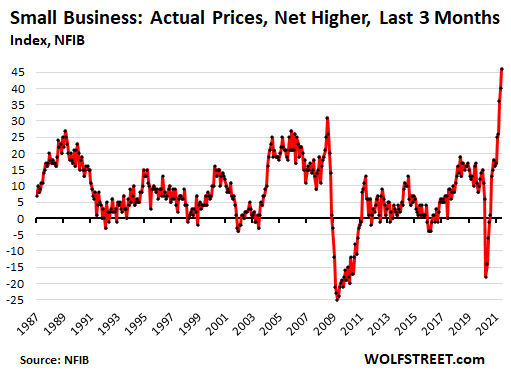 And it’s going to get bigger: A record portion of small businesses are still planning to raise their prices over the “next three months”: 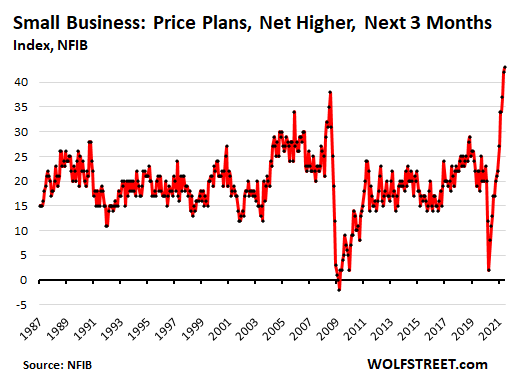 Small businesses, more often than not, carry more inventory than they want, and inventory being “too low” is generally not a big issue, according to the NFIB data. But this changed radically in June last year, when this metric began spiking to hit a new all-time record in June this year: 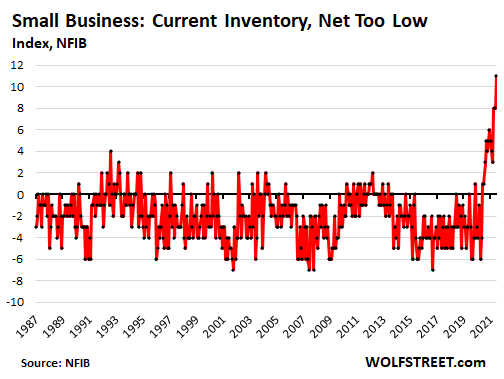 Owners of small businesses are feeling fairly optimistic overall, with the NFIB’s Optimism Index at 102. While down from the peak periods of optimism in the 107 range, it’s up a bunch from 91 during the dark days in April 2020, and from 81 during the low of the Financial Crisis in March 2009.

One of the many economic mindblowers during the pandemic was the spike in new business formations, amid suspicions that fraudsters were creating businesses to obtain PPP loans. But the PPP ended in May. Yet, business applications continued at a red-hot pace. Read... Did People Use their Stimulus to Start a Business? The Spike in New Businesses, one of the Mindblowers of the Pandemic

99 comments for “The State of the Small Business: Hiring Problems, Inventory Shortages, and Big Price Increases”