One of the many economic mindblowers during the pandemic was the spike in new business formations, based on applications for Employer Identification Numbers (EIN) with the IRS. They exploded in July last year, then zigzagged up and down, and in May, hit the second highest ever. Throughout, there were suspicions that business applications were spiking because fraudsters were creating businesses to obtain PPP loans – though an EIN wasn’t even required for PPP loans. The PPP ended in May. And today, we got the business applications for June.

This may shed more light on the phenomenon that people, flush with stimulus money and income from unemployment compensation and stock market gains, are striking out on their own – which would be a great thing. And it may also shed some light from a different angle on the unemployment situation and the difficulties companies have in hiring workers. 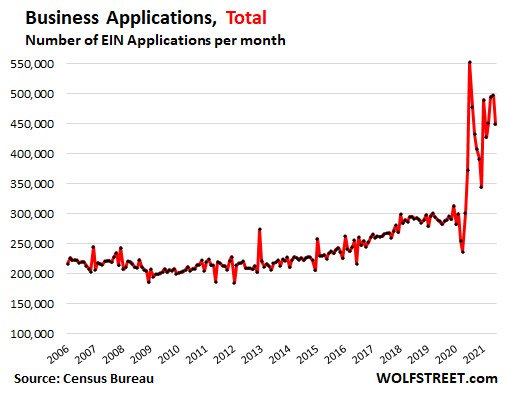 The EIN is for businesses what the Social Security number is for individual taxpayers. Excluded are EIN applications that are unrelated to typical business formations, such for tax liens, estates, trusts, etc.

Most startups will create only a job for the owner and maybe a few others. And that’s great. Those types of small potentially exciting businesses – such as the WOLF STREET media mogul empire before you – hire all kinds of other businesses or people on a contract basis, from accounting to IT support. They just don’t add many employees. But there are other startups that do have the potential to create lots of jobs, though their number is a lot smaller.

Based on the information in the EIN application, the Census Bureau identified businesses that have a “high propensity” of creating a significant payroll – the “High-Propensity Business Applications” (HBA). 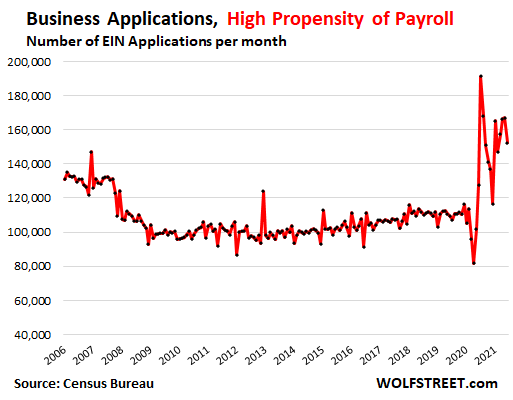 Within the group of HBAs is the subgroup of “Business Applications with Planned Wages” (WBA) by businesses that already have a planned date for paying wages. They have funding, they have hired people, and they’re ready to pay wages. They’re deemed to be most likely to grow their payroll and become significant employers. 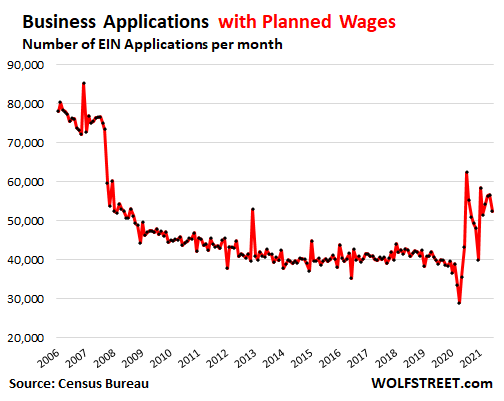 Mostly businesses with a low propensity to create jobs.

And that’s a great way to go. But the failure rates are very high. In many cases, the owners quietly throw in the towel, shut down the business whose losses they’d funded on their credit cards, and either start up another business or get a job.

Applications for these types of businesses began to surged during the Financial Crisis and continued to rise – even as the other types of applications declined or remained flat – and nearly doubled from the year 2007 (1.1 million) to the year 2019 (2.2 million). And then came the huge spike in mid-2020, when millions of people got laid off and were flush with cash to strike out and start something new.

By contrast, in June, the HBAs had barely recovered to 2007 levels, after years of drought (purple line); and the WBAs never hit those 2007 levels again, not even during the spike last July (green line): 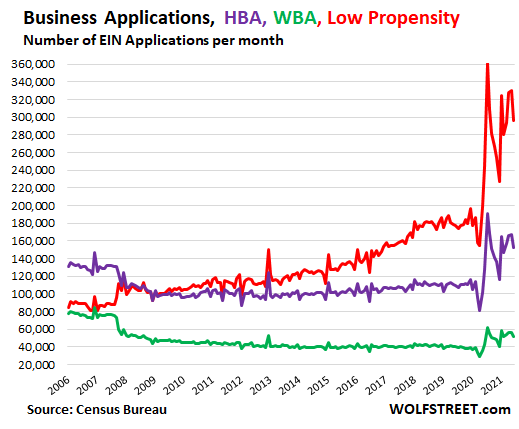 What types of businesses are they?

Retail trade dominates. Brick-and-mortar retail businesses have long been under siege from ecommerce, and then took a brutal beating during the pandemic. Over the years, tens of thousands of stores were shuttered, from Sears stores down to small shops, and numerous malls turned into zombie malls. And the pandemic accelerated that process. Yet, entrepreneurs never gave up on retail, they just did it online. They can run an operation out of their garage and ride the historic boom of ecommerce during the pandemic.

In June, 81,351 businesses filed applications listing the NAICS (North American Industry Classification System) code for retail trade businesses. This was up by 86% from June 2019.

Retail trade business applications used to run roughly on the same level as, or below, professional services applications (green line) but during the Pandemic just exploded higher.

The top seven industries, by number of business applications in June, and the % increase from June 2019: 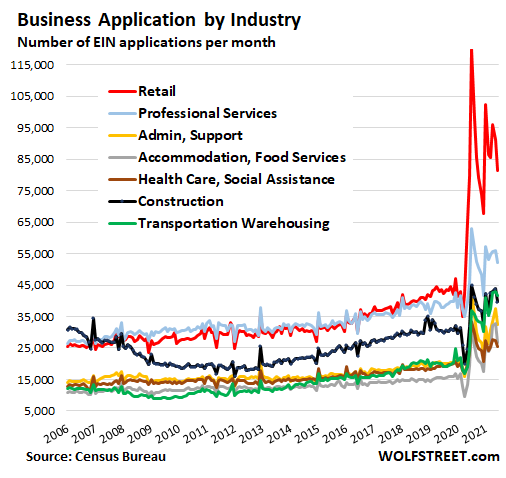 Eager entrepreneurs in the waiting…

The survey also found that 82% of these prospective entrepreneurs would take a pay cut for a year as they worked on their business.

The stimulus and extra unemployment payments during the pandemic may have made it possible for entrepreneurs to get their ducks all lined up in a row, and put their businesses together, while still getting some cash flow to cover their household expenses. And those creative juices are a good thing.

116 comments for “Did People Use their Stimulus to Start a Business? The Spike in New Businesses, one of the Mindblowers of the Pandemic”