Trillions whooshing by so fast they’re hard to even see. And now the TGA is spiking again.

The flat spots depict the uniquely American political charade of the Debt Ceiling, the periods when the gross national debt bounced into the Debt Ceiling as set by Congress. These flat spots are the days when everyone in Congress is trying to hijack the Debt Ceiling law in order to arm-twist the other side into approving their favorite priorities! Hahahaha, Congress, thank you for that hilarious charade. 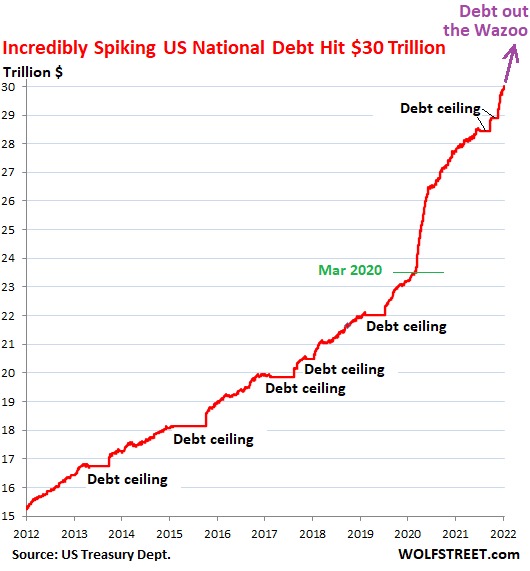 In 2021, there were two Debt Ceiling charades, and each time it was resolved, within days, the debt spiked with renewed vigor to make up for the flat spots. The chart below magnifies the daily debt levels since December 2020: 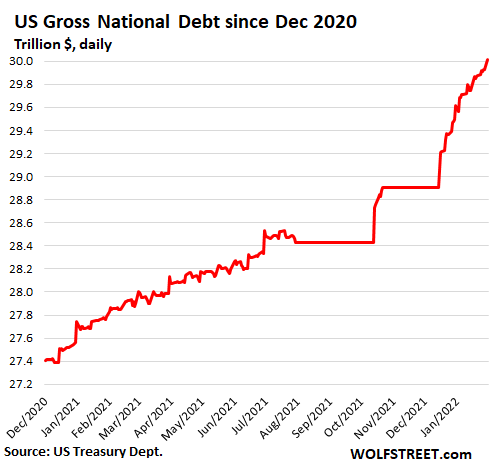 And the TGA is spiking again.

The government’s checking account, the Treasury General Account (TGA) at the Federal Reserve Bank of New York, has become a wild phenomenon in its own right – and it’s spiking again and hit $742 billion as of January 31: 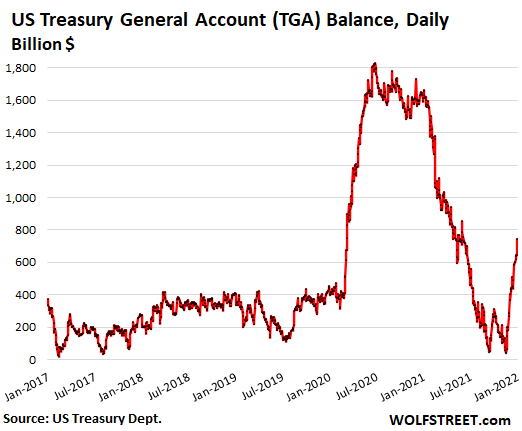 In the spring of 2020, the government added $3 trillion of new debt by selling Treasury securities to fund the emergency spending programs. The Fed was buying about that much debt over the same period, neatly monetizing the whole thing. But the government didn’t spend all of this borrowed money, and the TGA balance ballooned from $400 billion before the crisis to $1.8 trillion by July 2020.

Toward the end of 2020, the government decided to start drawing down the TGA balance by reducing the amounts to be borrowed. This was sped up in early 2021 to bring the balance down to $500 billion by the summer of 2021.

On August 1, 2021, the amount of the gross national debt outstanding at the time, $28.4 trillion, became the Debt Ceiling. And the government was forced to draw down the balance during both Debt Ceiling charades in October and December, bottoming out at $42 billion on December 16, which was as close to zero as Congress had the nerve to get, given the gigantic amounts of money that pass through this account on a daily basis.

After the Debt Ceiling charade was resolved, the government began borrowing again on a large scale, and the proceeds from these debt sales went into the TGA to await getting spent, and the TGA has now spiked again to $742 billion as of January 31. These are just gigantic amounts of money that are getting borrowed and thrown around here in a matter of days.