First things first: Retail sales, reported today by the Commerce Department, are based on revenues, obtained via a survey of about 5,500 retail businesses, by retailer category. This is revenue data from retailers – from the company’s point of view, not from the consumer’s point of view. It’s an indication of how well revenues at these companies are doing. And in a moment, we’ll get into a gazillion of these revenue charts by retailer category.

“Retail sales” not “Consumer Spending”: The latter is reported about two weeks after retail sales, and my analysis of inflation-adjusted “real” consumer spending on durable goods, nondurable goods, and services is here. Through August, consumers have outspent inflation.

“Retail sales” here track sales of goods, not services, but the raging inflation has shifted from goods to services – and in services, inflation is raging at the worst rate since 1982.

Inflation raged in services and cooled in goods on a month-to-month basis in September. Food prices still jumped – and we’ll see that in the sales by grocery stores in a moment. But gasoline prices plunged, and so sales at gas stations fell. Used vehicle prices dropped, new vehicle prices rose but at a lower rate. Prices of electronics plunged. The CPI for durable goods – new and used vehicles, appliances, consumer electronics, sporting goods, furniture, etc. – dipped in September from August (all my inflation details are here). For many retailers, price increases are now harder to push through and make stick.

After price drops in many categories of goods, total retail sales remained flat in September from August, at $684 billion, seasonally adjusted, and were up 8.2% from a year ago. Compared to September 2019, retail sales were up a mind-boggling 32%. 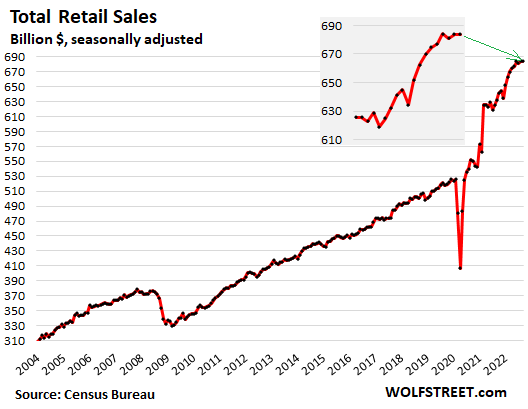 Sales at New and Used Vehicle and Parts Dealers, the largest category, edged down by 0.4% in September from August, to $128 billion, seasonally adjusted, but was up by 5.6% from a year ago, and by 23% from September 2019.

The sales increases since 2019 come from much higher prices of new and used vehicles, on much lower volume as the industry has had huge supply problems.

Used vehicle prices have dropped from their crazy spike, and there is now plenty of supply on dealer lots as price resistance has finally set in. The number of used vehicles sold is down about 15% from 2019.

New vehicle prices continued to surge in September. Inventories of full-size trucks, which were depleted last year and earlier this year, are rising, and some dealers are overstocked, and are slapping on big discounts. Smaller vehicles with good fuel economy have sold out, and there are long waiting lists, including for EVs. So new vehicle unit sales – down 19% in Q3 from Q3 2019 – are not yet constrained by demand but by supply. 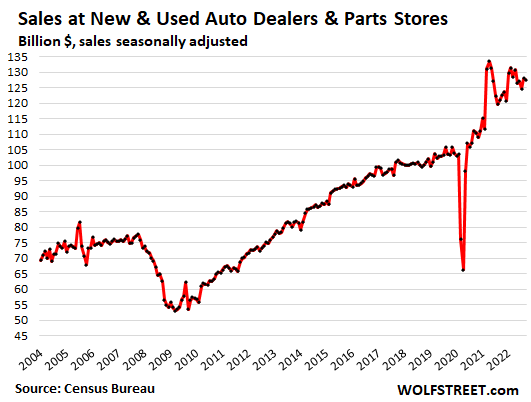 Sales at ecommerce and other “nonstore retailers” rose 0.5% to a new record of $109 billion, seasonally adjusted, up by 11.6% year-over-year and up by 71% from September 2019, as the shift in sales from brick-and-mortar stores to online sites continued relentlessly.

Included here are sales by the ecommerce operations of brick-and-mortar retailers, and by stalls and markets: 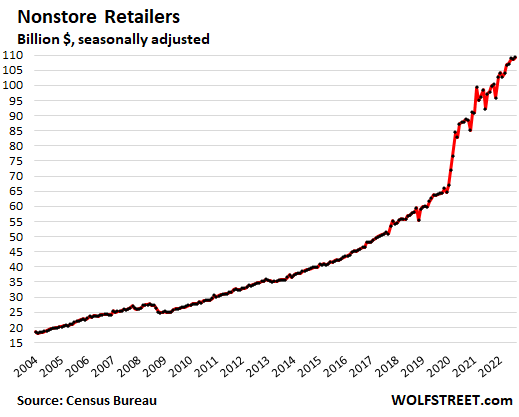 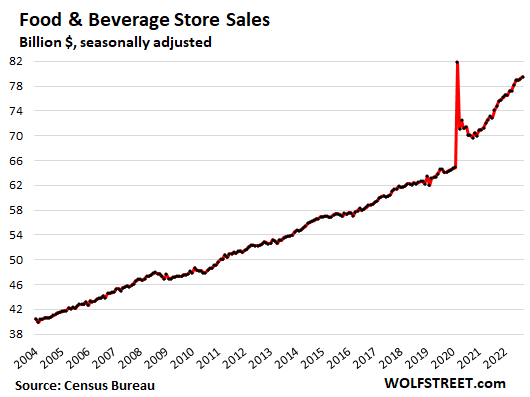 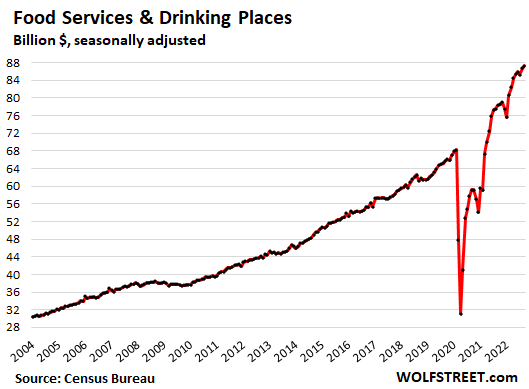 General merchandise stores: Sales rose 0.6% for the month, and 4.1% year-over-year, to $59 billion, up by 21% from September 2019. Walmart and Target are in this category, but not department stores: 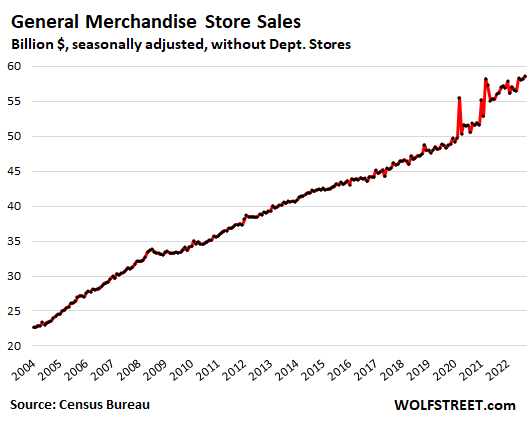 Gas stations: Sales fell 1.4% for the month, the third monthly drop in a row, to $63 billion, the lowest since February, as the CPI for gasoline has plunged for the third month in a row, and is down by 24% from the peak in June. Sales were still up by 21% from a year ago, and by 48% from September 2019.

Sales at gas stations include all the other goods they’re selling, such as food, beverages, motor oil, and other stuff. The price drop in gasoline may have been moderated by price increases in this other stuff. 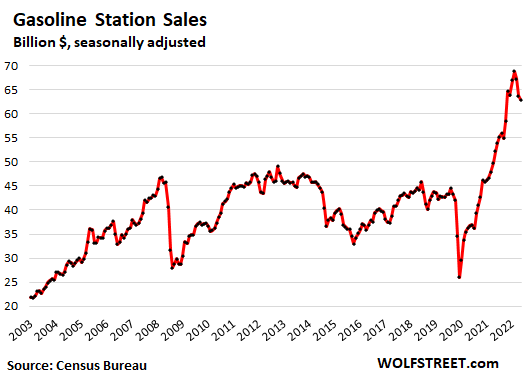 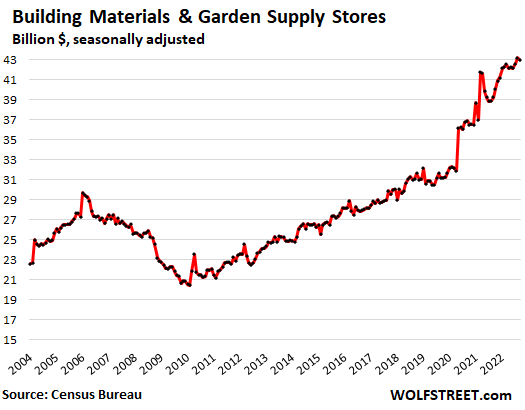 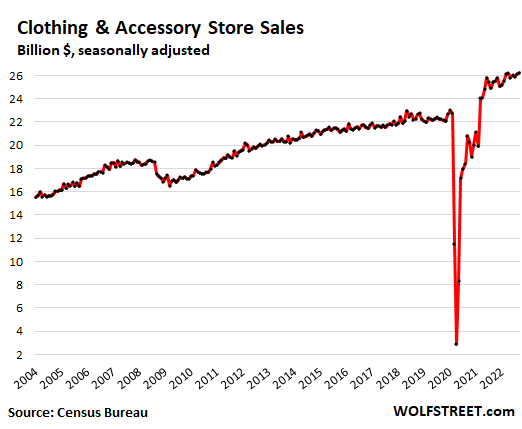 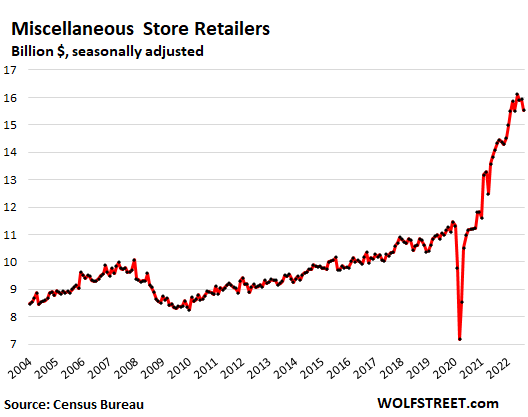 Furniture and home furnishing stores: Sales fell 0.7% for the month to $12 billion, and were up less than 1% year-over-year. Compared to September 2019, sales were up 17%: 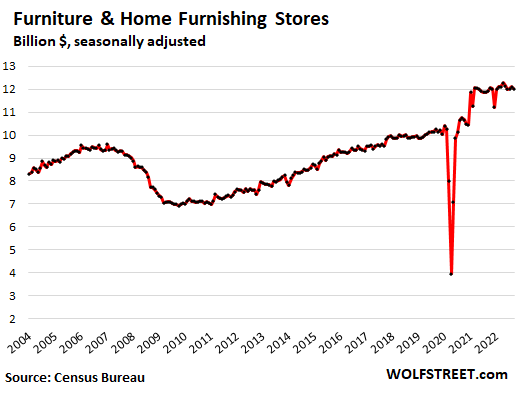 Since 2000, sales were down 42%. Department store sales have moved from mall stores to the internet, including at the ecommerce sites of the few surviving department store chains: 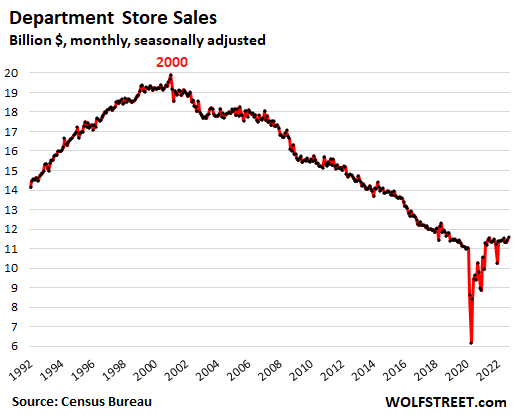 Countless department stores and department store chains, from Sears on down, filed for bankruptcy and were mostly liquidated. Department stores were once upon a time the iconic place where Americans shopped. Today, only a small number of chains survive, such as Macy’s, and even they have been closing lots of stores every year for many years, and lots of malls, those that haven’t been shuttered yet, have boarded-up department stores as anchors.

Americans have found out that anything you can buy at a brick-and-mortar department store, can be bought online, including at that chain’s website. 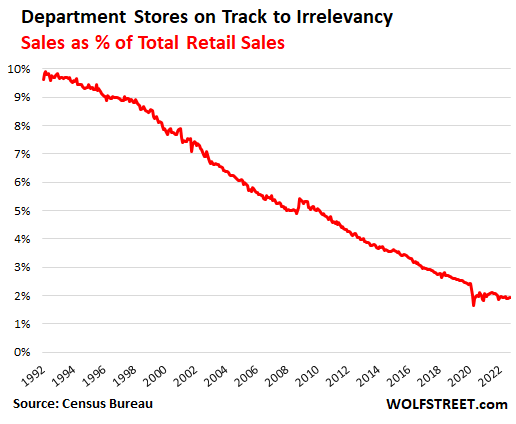 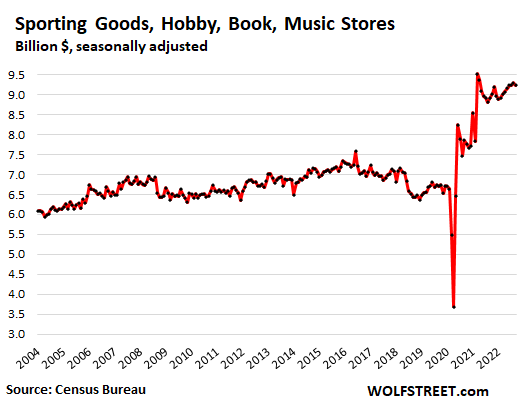 Electronics and appliance stores: Sales fell 0.8% for the month, and by 8.6% year-over-year, to $7.4 billion, and where down even from September 2019. Retailers in this category are dealing with price drops that are particularly steep for consumer electronics. In September: 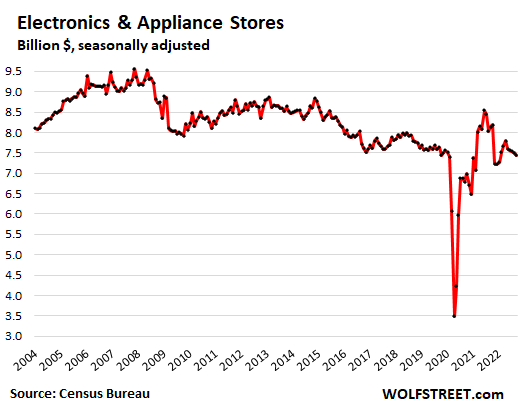