Over the four weeks through September 9, gasoline consumption dropped by 11.7% from the same four-week period in 2019, to 8.56 million barrels per day on average, below the same periods in 2020 and 2021, according to EIA data today.

The EIA measures gasoline consumption in terms of barrels supplied to the market by refiners, blenders, etc., and not by retail sales at gas stations. On this moving four-week average basis, it was the steepest decline so far this year, that has seen nothing but declines from the same periods in 2019. 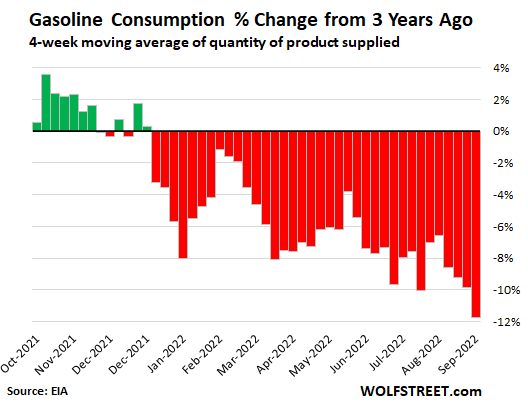 The decline accelerated even as gasoline prices have plunged from the top of the spike in mid-June. This may indicate that the classic economic principle of “demand destruction” – where a price spike triggers a decline in demand that then causes the price to back off – may not just be a blip, but that this demand destruction may have become in part structural. 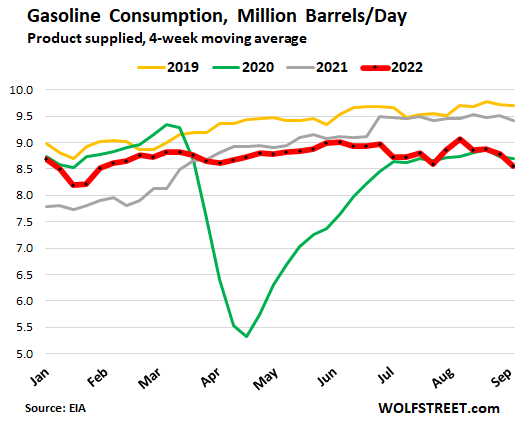 This demand destruction caused by sky-high gasoline prices is happening on a global scale. It’s where price resistance has set in, and people have changed their behavior a little here and there. They cut out unnecessary trips. They’re prioritizing their most fuel-efficient vehicle in the garage. When they buy a vehicle, fuel economy is moving up as a decision factor. Working from home has become sticky, and fewer people are commuting to work every day. And for vacations, people might have chosen to go places that involve less driving.

This demand destruction pushed down the price.

The average price of gasoline in the US, all grades combined, had spiked to $5.00 a gallon by June 13, according to EIA data. This type of price spike – up 63% year-over-year – sent shock waves through wallets and minds. Everyone was talking about the price of gasoline. But the average price has now dropped to $3.69, which is where it had been for years in the past – and yet, demand destruction accelerated: 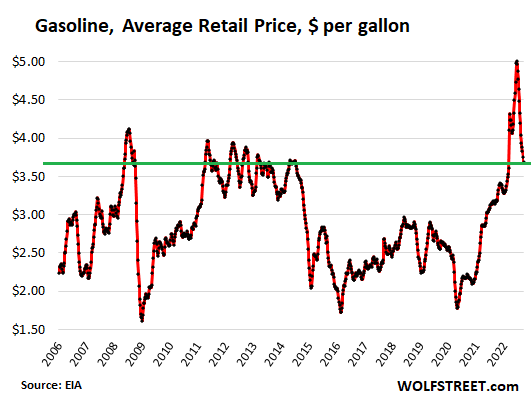 Gasoline consumption has been stagnant since 2007.

Over the long term, the four-week average gasoline consumption of 8.56 million barrels per day was first exceeded in August 1997: 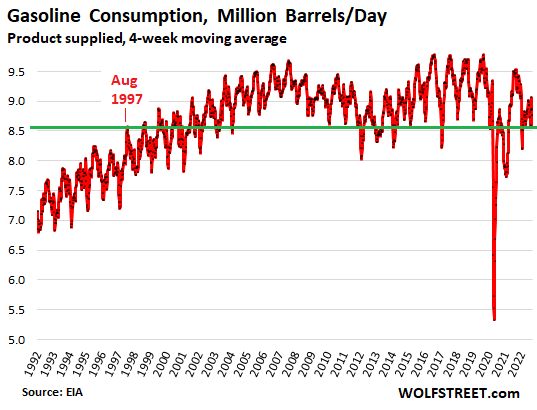 EVs are still only a minuscule part of the 284 million vehicles in operation. There are only 1.8 million EVs on the road, for a minuscule share of 0.63% of all vehicles in operation (my discussion on what Americans are driving). EVs are being prioritized for driving in two-vehicle households to dodge high gasoline prices. And EV sales are booming, with long wait lists and consumers willing to pay whatever. So EVs are starting to have some impact on gasoline demand, but it’s still very small.

Improvements in fuel-efficiency across the spectrum over the past 20 years have largely been responsible for the stagnation in demand through 2019.

Consumption this year is shaping up to be below 2021. There is a good chance that gasoline consumption may never again hit that ceiling of 3.4 billion barrels per year again (green = my estimate for 2022): 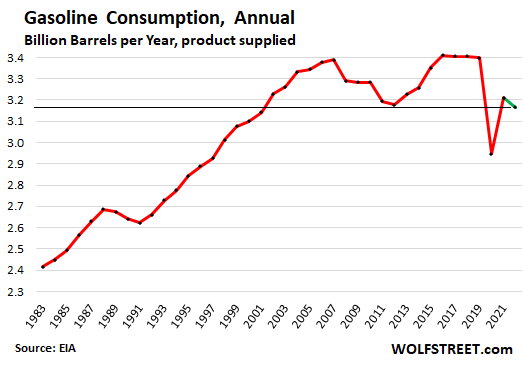 If US refiners have not been investing in the construction of new refineries, it’s because they too have long seen this long-term stagnation and now decline in the demand for gasoline.

Rather than relying on growth in the US, refineries turned into big exporters of gasoline, diesel, jet fuel, and other petroleum products. Even the refineries in the San Francisco Bay Area are importing crude oil and are exporting refined product to Mexico and further south.

We here in San Francisco could see those tankers head out the Golden Gate fully loaded, while we paid over $6 a gallon, and there is nothing like putting $100 into a tank every two weeks to persuade someone to look for alternatives.

In the middle of the night, electric utilities sit on huge amounts of idle and very costly capacity, and this is when EV owners are encouraged to charge their vehicles because electricity prices are lower and people with garages can just plug them in overnight. Utilities are licking their chops because they too, like refiners, have been stuck in a stagnating business, as consumers, businesses, and municipalities have invested in more efficient lights, appliances, HVAC systems, and equipment.

And those utilities, by selling electricity to EV owners in the middle of the night, are making money off what was their costly idle capacity, and someday this might even get their business to grow again, which would be a godsend for them, but there were still no signs of growth in electricity sales: 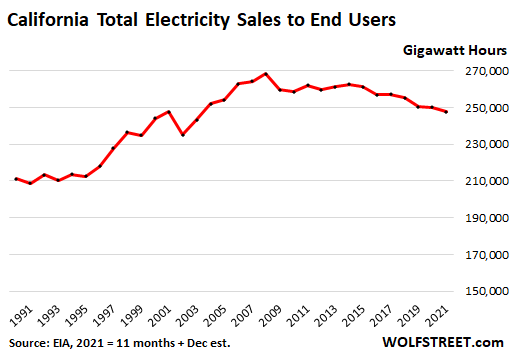