Beneficiaries got whacked over the head in 2021 and 2022 by raging inflation that outran the COLAs.

Among the raging and worse-than-expected inflation data released today was the Consumer Price Index for All Urban Wage Earners and Clerical Workers (CPI-W), which the Social Security Administration uses to calculate the Cost-of-Living Adjustment (COLA) for Social Security benefits. 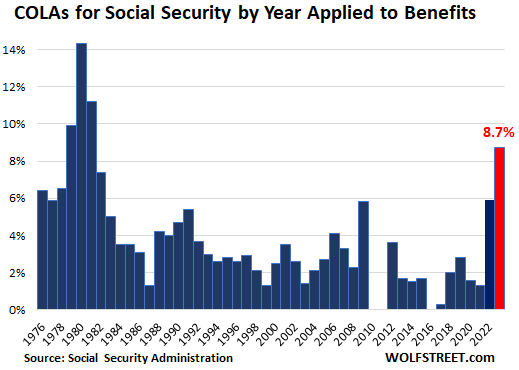 For 2021, the COLA was only 1.3% (set in the third quarter of 2020), even as inflation began to rage, and the purchasing power of the Social Security benefits dropped sharply.

In October 2021, with inflation raging, the COLA for 2022 jumped to 5.9%. There was some jubilating among beneficiaries that there was finally a big increase to keep up with rising costs, after the 0% to 2% increases for most of the prior decade. But those hopes got whacked down by reality because in 2022, as benefits rose by 5.9%, CPI inflation jumped by over 8% and in some month well over 9%, and that big COLA got eaten up by inflation plus some, and the purchasing power of the Social Security benefits dropped again.

There are now hopes that the Fed’s rate hikes and QT will finally put a cap on inflation this year and will bring it down next year. If that’s the case, the 8.7% COLA may actually be larger than CPI inflation in 2023, and benefits might actually regain a little of the purchasing power they’d lost.

If that’s not the case, if inflation continues to dish up nasty surprises, which it has a tendency to do, 2023 might be another year of further belt-tightening.

For the younger people who read this with amazement, let me share with you what the dad of my high school sweetheart told me, when I was 17 and he about 40. He had his own CPA firm, and he said that he’d never get any Social Security benefits because Social Security was a scam and would blow up before he reached retirement age.

And then decades later when he retired, he got his benefits, and a few years ago, when he passed away, his spouse got the survivor benefits. And despite all the nonsense being bandied about out there, Social Security will be there for me, and it’ll be there for you, even if the system needs to be adjusted from time to time, as it has been in the past.

But the most crucial thing to know is that Social Security alone won’t be enough. CPI-W may not fully capture the increases in actual cost of living that you may experience, and so year after year, the purchasing power of those benefits declines in an insidiously cumulative manner – just a little every year, but it adds up. That’s why it’s so important to create some kind of retirement nest egg.

And for those people who can, the best thing to do – for all kinds of reasons, not just money – is to keep on working in some way past retirement age. Even a part-time gig will vastly improve, or at least slow down the deterioration, of the finances later in life when work becomes impossible. And look at all the elderly in Congress and the White House. A bunch of them are from the Silent Generation, and they’re having a blast.

197 comments for “Social Security COLA for 2023 Biggest since 1981, Might Finally Outpace Inflation, Unless Inflation Dishes Up More Surprises”