Will CPI inflation back off as used-vehicle prices partially unwind? Ha, here come the massive CPI measures for rent that have begun to soar. Inflation Whac-A-Mole.

This has been developing in the used vehicle market since November: After prices spiked into the stratosphere, more potential buyers became reluctant to overpay ridiculous amounts for a used vehicle, and sales began to dip, and the underlying dynamics in the wholesale market began to weaken in November and weakened further in December, and then in January wholesale prices were flat for the first time since August seasonally adjusted. And not seasonally adjusted, prices fell.

By the beginning of February, supply was above average. And over the first two weeks in February, prices have begun to dip even on a seasonally adjusted basis. So here we go, charting the turning point of a market gone nuts.

Used vehicle supply on dealer lots at the beginning of February rose to 56 days, up from the 40-day range over the summer, the third month in a row of increases, including sharp increases over the past two months, according to data from Cox Automotive released last Thursday. This was well above the average supply of 48 days in 2019. So given the current rate of retail sales, there is plenty of supply on dealer lots, and this supply is growing rapidly: 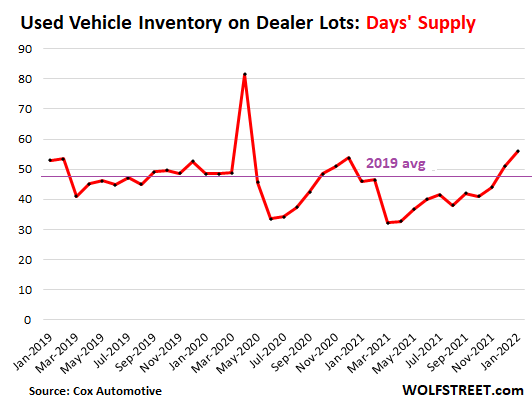 The number of used vehicles in inventory on dealer lots at the beginning of February rose to 2.55 million vehicles, the highest since December 2020 (2.56 million), according to Cox Automotive data, and the second month in a row of sharp month-to-month increases. 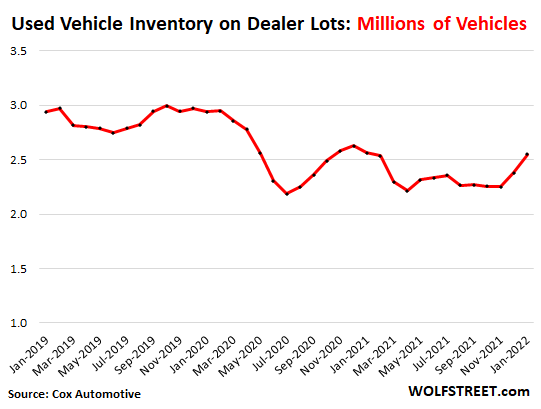 As you can see from the charts above, though used vehicle inventories were tight last year, there was no shortage in inventories to rationalize the ridiculous price spikes – 40.5% year over year, according to the CPI for used cars and trucks.

These price spikes happened, starting a year ago, because consumers were suddenly eager to pay those prices, and dealers were eager to charge them, and then when dealers saw that they could sell at those prices, they began bidding up wholesale prices. This is the inflationary mindset that took over, and prices spiked despite plenty of supply.

In the first two weeks of February, wholesale prices at the auctions around the US fell by 1.5% seasonally adjusted, the first dip since last summer, after having already flattened in January, according to Manheim, the largest auto auction house in the US and a unit of Cox automotive. This whittled down the year-over-year price spike to 38%, from the peak of 47% in December, and it whittled down the two-year spike to 62%, from 67% in December. Even if those prices drop quite a bit further, they will still be ridiculous. 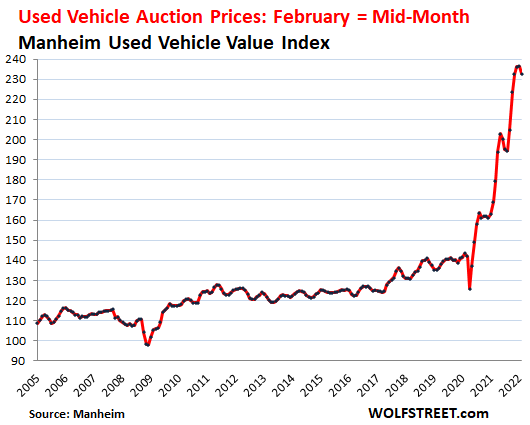 Based on the underlying auction dynamics that deteriorated further over the first two weeks in February, Manheim said that used-vehicle prices would “likely see further declines in the second half of the month.”

I don’t expect prices of used vehicles to plunge anywhere near 2019 levels, because prices of consumer goods are downward sticky, but there is now growing resistance by potential buyers to these still ridiculous used vehicle prices.

Inventory of new vehicles on dealer lots at the beginning of February dipped to 1.08 million vehicles. While that is up a tad from the lows during the fall, it’s up not nearly enough to make a dent: they’ve collapsed by 68% from two years ago, when there were 3.35 million vehicles in inventory: 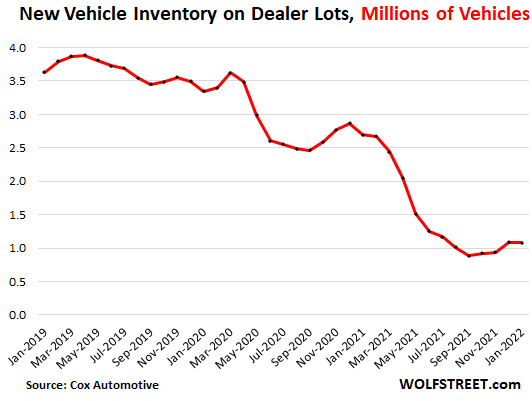 New vehicle days’ supply, given the depressed sales volume due to the shortage of product, ticked up to 37 days, still woefully low, when 60 days is considered healthy. By comparison, in 2019, average supply was nearly 90 days, which was problematic in the other direction.

Used vehicle CPI weighs about 4% in overall CPI. The two housing measures in CPI, which are both based on rents, weigh a combined 32% of overall CPI. These housing measures have started to surge. As the spiking “asking rents” – rents listed by landlords in their ads – become actual rents for enough tenants to move the needle, they will filter into CPI.

But this process takes time. The asking rent spikes we have already seen through January will filter into the CPI over the next two years (I discuss this phenomenon of asking rents versus CPI here). And given their weight (32% of overall CPI), these rent inflation measures will easily blow away any declines in used vehicle prices.

This is the game of inflation Whac-A-Mole: One price gets hammered down while prices begin to spike elsewhere as inflation spirals through the economy.