Folks scrambled to lock in mortgage rates in the hottest markets, no matter what the price. But prices declined or were flat in four of the 11 largest markets.

A year ago, the Bank of Canada got nervous enough to start tapering its purchases of Government of Canada (GoC) bonds, and it began to actually unwind its holdings of Canada Treasury bills and repos. It had already ended or halted its other programs, including the purchases of mortgage-backed securities.

Total assets have now declined by 14.3% from the peak in March 2021, to C$493 billion. The BOC has shed practically all of its Canada Treasury bills (purple line) and most of its Repos (green line). And over the past few weeks, even its holdings of GoC bonds started to decline (red line), as QE has turned into QT (quantitative tightening): 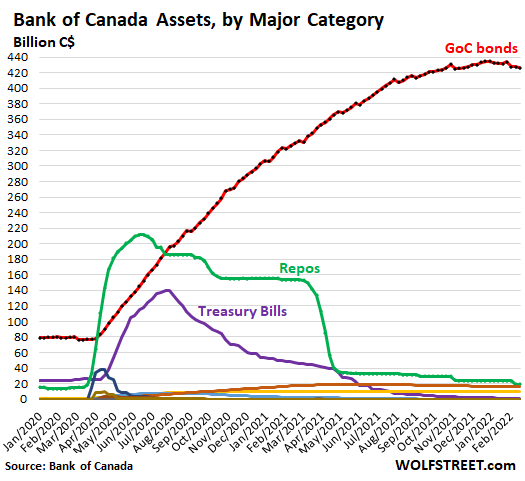 The Bank of Canada wasn’t going to front-run the Fed with interest rate hikes, but market yields have shot higher, in parallel with the movements in the US bond market, in anticipation of multiple rate hikes this year. But those yields are still ridiculously low, in face of inflation that has now spiked to 5.1%.

The Canada Treasury 1-year yield on Friday closed at 1.25%, up by a full percentage point from October last year (data via Investing.com): 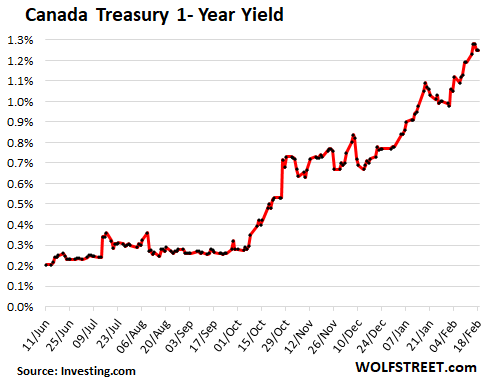 The Canada Treasury 10-year yield spiked to the highest level since February 2019 and closed on Friday at 1.95% (data via YCharts): 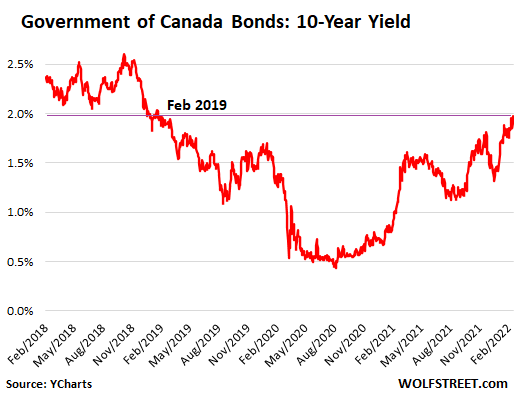 Mortgage rates are rising too, and a mad scramble has set in to lock in current rates before they rise further.

Home prices jump or spike, but not in all cities.

In several of Canada’s 11 largest cities, home prices jumped, including by a ridiculous 31.7% year-over-year in Halifax, according to the Teranet-National Bank House Price Index. On a month-to-month basis, prices declined in Ottawa and Quebec City and were essentially flat in Calgary and Edmonton.

In Greater Vancouver, house prices jumped 1.4% in January from December. Year-over-year, prices jumped 15.3%. Note the drop in prices that started in 2018 and lasted until the BoC’s reckless monetary policies during the pandemic bailed them out: 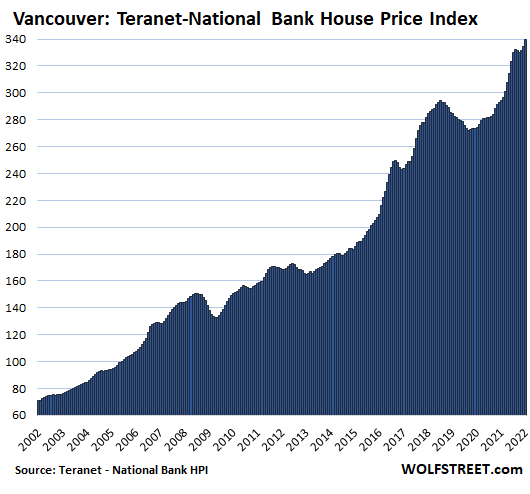 The Teranet-National Bank House Price Index is based on the “sales pairs” that compares the price of a house that sold in the current month to the price of the same house when it sold previously, tracking how many Canadian dollars it takes to buy the same house over time, which makes it a measure of house price inflation. The index is a three-month moving average.

In the Greater Toronto Area, home prices jumped 1.9% in January from December and by 19.1% year-over-year: 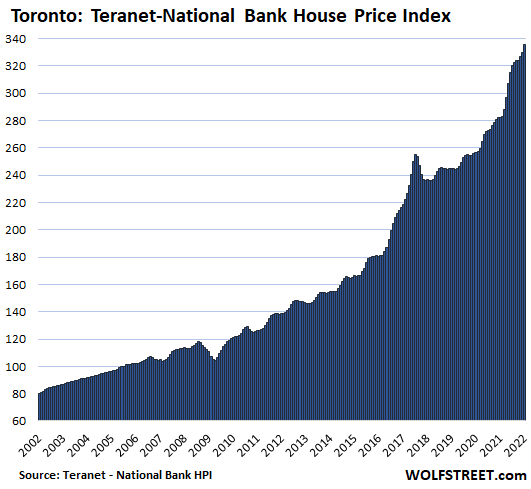 In Hamilton, Ontario, house prices spiked by 2.1% for the month and by 25.5% year-over-year, but that’s down from the 30%-spikes last July and August: 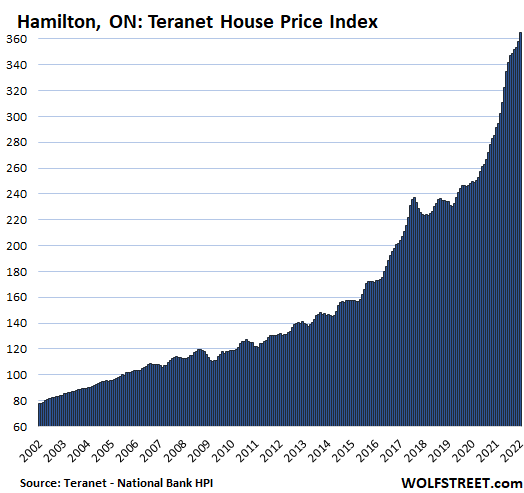 In Victoria, house prices jumped by 1.5% for the month, and by 20.8% year-over-year. Prices had flattened from 2018 through June 2020, when the BoC’s free money and interest rate repression kicked in: 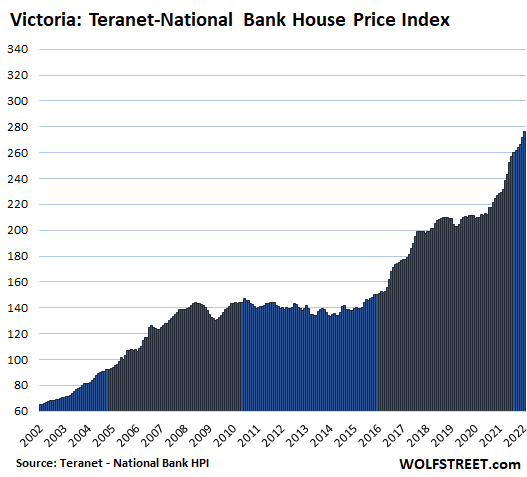 In Winnipeg, after two months in a row of month-to-month declines, house prices rose 0.9% for the month and 11.6% year-over-year. After the housing boom petered out in 2013, prices had remained about level for seven years until the BoC performed its miracles: 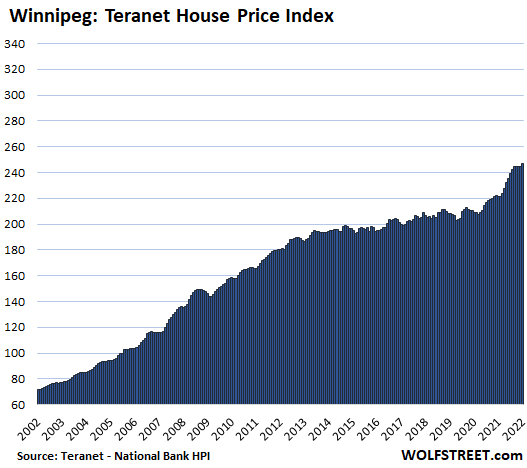 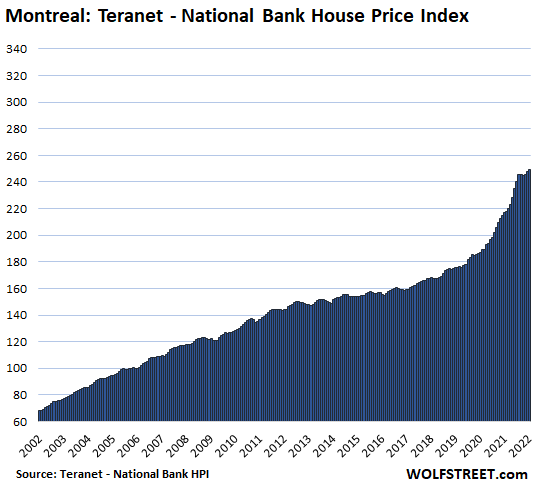 In Ottawa, house prices declined 0.3% for the month, the fifth month in a row of declines. This whittled down the year-over-year gain to 15.9%, from the peak last July of 28.9%: 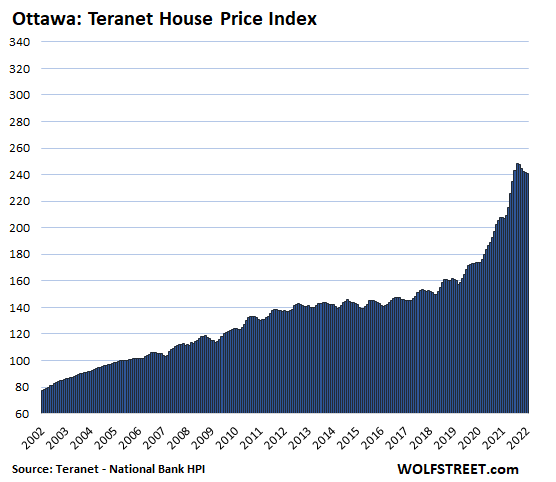 Halifax is king of the hill: house prices jumped by 1.2% for the month, and by 31.7% year-over-year. This makes it the ninth month in a row of year-over-year price spikes of around 30%: 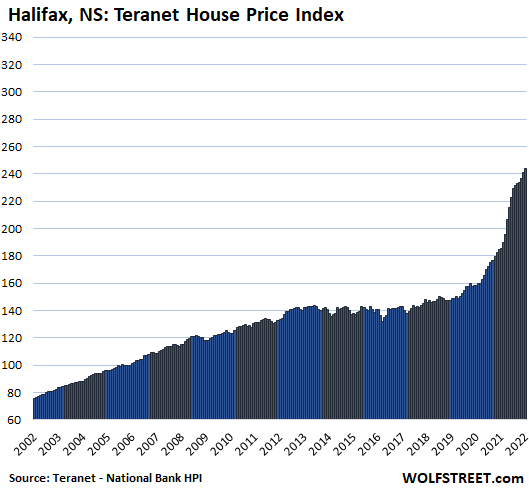 In Quebec City, house prices dipped 0.6% for the month, which whittled down the year-over-year gain to 9.4%: 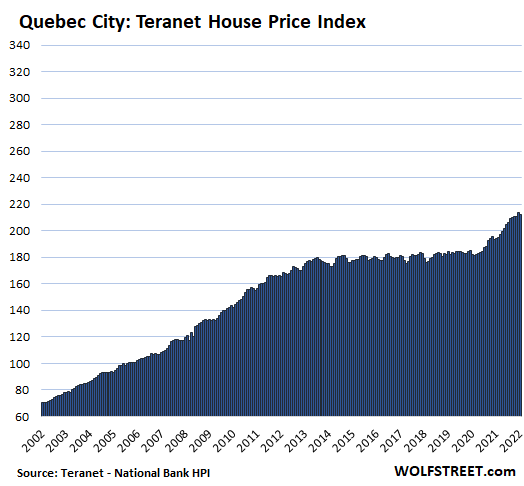 In Calgary, house prices were flat for the month and up 8.7% year-over-year. Calgary and Edmonton are Canada’s oil towns whose mind-boggling housing booms ended in 2007. And then, for 14 years, house prices went nowhere. 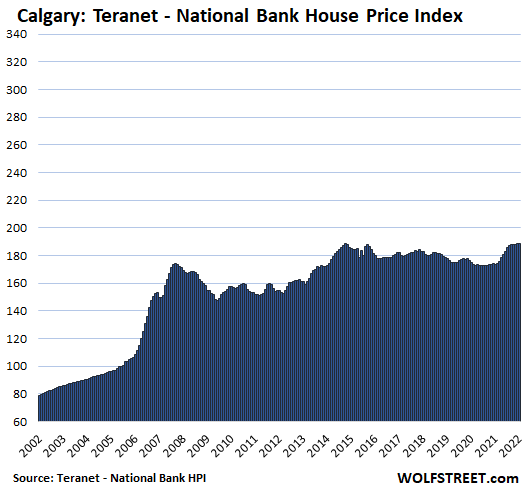 In Edmonton, house prices edged up after two months in a row of declines. Year-over-year, prices rose 4.3% and remain below 2007 levels: 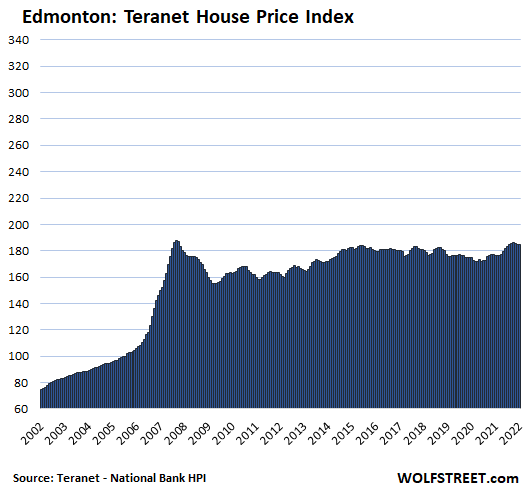 155 comments for “The Most Splendid Housing Bubbles in Canada as Bank of Canada Begins QT, Yields Spike”