The coronavirus is just the latest in a long series of issues successfully brushed off as irrelevant because all that mattered was that stocks went up.

“Complacency” – brushing off big issues as irrelevant or nonexistent because they don’t fit into the buy-buy-buy scenario – has a way of serving up a surprise tab just when the party is hopping at its wildest.

Today, we’re seeing a little of it. Already on Friday, some fallout had hit stocks, following a mild down-day on Thursday. As of early afternoon today, over those three days, the S&P 500 index has dropped 4.8% and the Nasdaq 5.8%.

Nothing mattered because stocks kept surging higher. Despite the freight recession that spread across 2019 and is still getting worse, with shipments plunging at the fastest rate since 2009, and with railroads laying off people massively amid dropping revenues and plunging earnings, Union Pacific’s shares, upon the news, hit a new high. These issues predated the coronavirus.

The auto industry in the US has seen declining sales volume, as measured in number of vehicles delivered, since 2016. This is a huge industry. But no big deal. In the largest market in the US, in California, new-vehicle registrations have dropped 5.5% in 2019, bringing the drop since 2016 to 9.5%. Across the US, new vehicles sales have also fallen for the third year in a row, to below year 2000 levels.

These developments are not new; they just reached a new high. But the market decided that they didn’t matter, that nothing mattered.

The entire US shale-oil-and-gas sector has been getting crushed again, but no problem. Manufacturing output has been declining for most of last year. But no problem.

Brick-and-mortar retail – particularly “mall stores” such as department stores – has been getting wiped out store by store, chain by chain, this time not by problems in the economy but by a structural shift in how Americans shop by switching to ecommerce, which is booming. Thousands of big stores are getting shuttered every year, with big chains, such as Sears Holdings, getting liquidated, along with innumerable smaller ones. But no problem.

Mall properties have declined in value, but not by much, and most mall REITs hung in there, as investors figured that this whole concept of the brick-and-mortar meltdown was overblown and that it would somehow go away.

Sector after sector has run into problems over the past few years, but it didn’t matter because stocks would just go up and up and up, and so who cares if these companies lose money forever, or burn cash forever or are outright doomed. So long as stocks go up….

Now comes the coronavirus outbreak. It’s just the latest issue. It’s a big issue for Corporate America, and it’s a horrible issue for China. This became clear in January. But US stock indices kept wobbling to new highs while the economic and business issues caused by the de-facto economic shutdown of much of China were just blown off as irrelevant because they didn’t matter as long as stocks go up.

Apple reached a new high in mid-February despite the clearer-than-daylight problems in China, with demand for iPhones in China collapsing, with Apple stores closed, with iPhone factories in China shut down. It just didn’t matter — until February 17, when Apple announced what everyone knew already, but had blissfully brushed off: That it had huge problems in China, and that both, demand for iPhones and its supply chain of iPhones in China had collapsed. Since the February 12 high, shares have dropped only 8.6%, including today’s 4.4% drop (as of early afternoon).

And then suddenly it matters at least a little bit, as complacency turns into confusion among stock jockeys. This wasn’t supposed to happen. Stocks were guaranteed to only rise. That was the deal. Nothing else mattered. And they’re frazzled. How come all this crap suddenly matters? How can Tesla’s ludicrously-priced stock suddenly drop 7.5% out of the blue?

Auto sales in China, the world’s largest market, have come to a near-standstill due to the coronavirus, after having already plunged 13% in 2018 and 2019 combined. GM sells more vehicles in China than in the US. China is also the manufacturing hub for components used by assembly plants globally. And those components are not being manufactured because the factories have been shut down. This has been known since January.

But it didn’t matter because nothing mattered because stocks always go up. Until they don’t. The sudden turnaround of the stock market is confusing our coddled traders. How could this happen? Didn’t the Fed guarantee that stocks would never fall?

Then there’s QE-4, that $400 billion in liquidity that the Fed threw at the market between mid-September and the end of December. The market kept hyping the certainty that it would last forever. But it suddenly stopped at the end of December. And the Fed’s balance sheet has been essentially flat since then, turning from Big-Fat QE into No-QE: 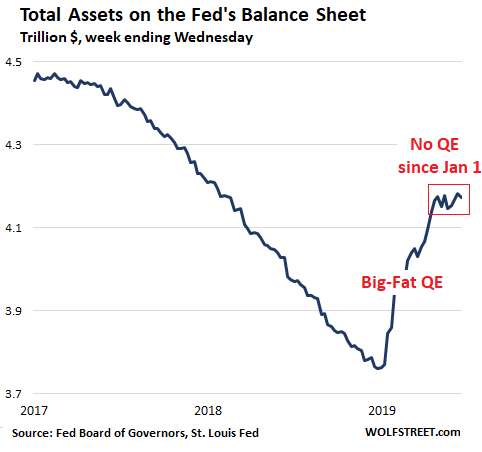 And that shift from Big-Fat QE to No-QE too has been known since January 1 because the Fed posts these numbers daily and weekly, and I report on it regularly, but the market just brushed them off, preferring to believe the misbegotten stories in the financial media about endless trillions of dollars still being created in repo liquidity.

So here we are. The drop in the market is still just a dip in the overall scheme of things. But the evil smell of reality has caused the market to puke today. That doesn’t mean that a new bout of complacency won’t set in. It’s always surprising to rational observers how long and to what ludicrous extent this complacency can be driven.