GM tries to shrink itself out of trouble. And it shrinks where it wants to grow. But when will it stop before hitting zero? Ugly charts of GM’s global vehicle sales, by region.

GM announced this weekend that it would pull out of Australia, New Zealand, and Thailand, in line with its strategy to exit one market after another to shrink itself to higher profits, which has led to a stupendous downward spiral in vehicle sales.

It already pulled out of Europe, once its second-largest market, by selling Opel and Vauxhall, and its vehicle sales there have collapsed to zero.  And while it was at it, it shut down its operations in Russia, India, and South Africa, all in 2017. Its vehicle sales in China, its largest and once booming market, have plunged by 23% since 2017. Its vehicle sales in the US have dropped 6.2% since 2015. And according to GM’s 10-K SEC filings, its global sales have plunged 23% over the past three years, from 10 million vehicles in 2016, to 7.7 million vehicles in 2019, and are now just a tad higher than during its infamous bankruptcy-year 2009: 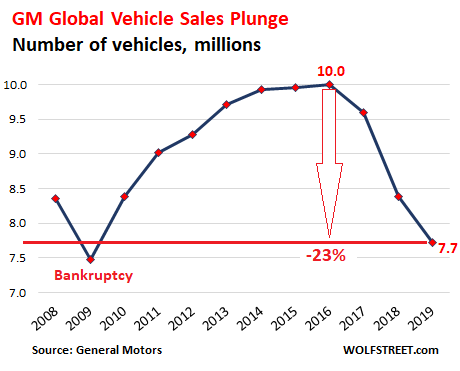 GM is winding down its engineering, design, and sales operations in Australia and will “retire” its Holden brand by 2021, it said in the announcement. GM had already stopped manufacturing Holdens in Australia in 2017 and switched to selling imports.

Upon the news of the pending demise of Holden, Australia’s Prime Minister Scott Morrison lashed out at GM for allowing Holden “to just wither away,” while, in perfect corporate-welfare-queen manner, grabbing “more than $2 billion” in taxpayer subsidies. [Yes Sir, Mr. Prime Minister Sir, that’s how it works in the USA].

In Thailand, GM plans to sell its Rayong factory to Great Wall Motors of China. And it will pull its Chevrolet brand out of the country by the end of 2020.

In Europe and some of the other markets where GM has shut down or sold its operations, it is now pursuing a “niche presence” by selling a few “profitable, high-end imported vehicles.” So maybe some Corvettes and Crew Cabs?

GM said it’s “taking decisive action to transform its international operations, building on the comprehensive strategy it laid out in 2015 to strengthen its core business….”

Alas, its biggest “core business” is in China, its largest market in terms of vehicle sales through its various joint ventures, and in China sales are in freefall at the moment, with many dealerships and manufacturing plants having closed due to the coronavirus and demand having collapsed. 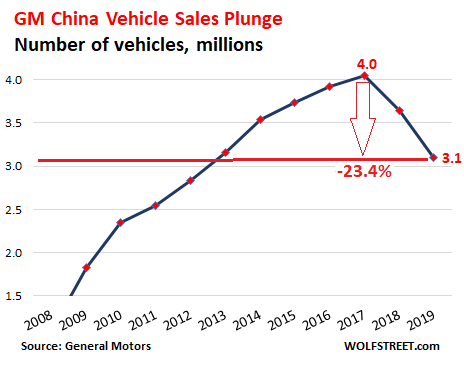 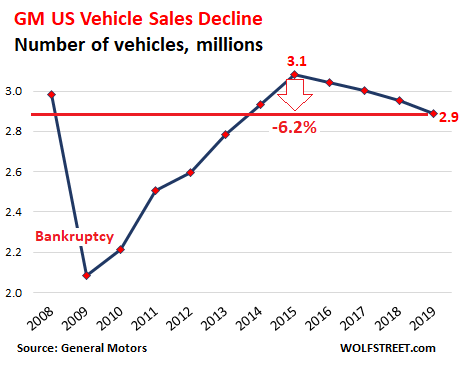 And then, there is Europe and Russia, until 2008 GM’s second largest market. After its bankruptcy filing in 2009, GM switched its focus to China to pursue its dreams, and its sales in Europe fizzled. In 2017, GM sold its German brand Opel and its UK brand Vauxhall and washed its hands off two decades of losses. It also shut down its manufacturing and sales operations in Russia, where car sales collapsed following the ruble crisis of 2014. Back in 2008, GM still sold 2.08 million vehicles in the region. By 2018, sales had collapsed to zero (except for a few Vettes and other play thingies): 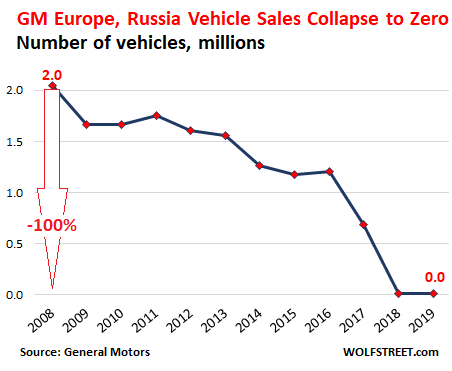 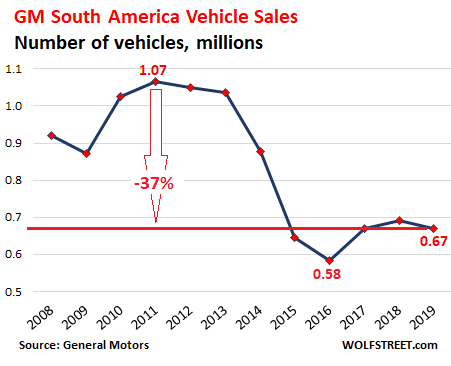 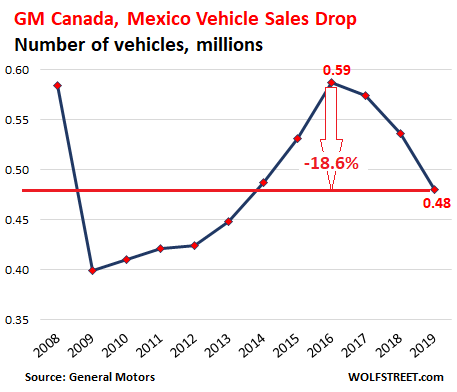 In the Rest of the World…  In GM’s category “Asia/Pacific, Middle East and Africa,” minus China – a category that includes Australia, New Zealand, Thailand, Japan, and other markets in the Asia-Pacific region, plus India, the Middle East, and Africa – GM’s sales have plunged 31% in five years, from 840,000 vehicles in 2014 to 580,000 vehicles in 2019. And it will plunge further with the current shutdown of its operations in Australia, New Zealand, and Thailand: 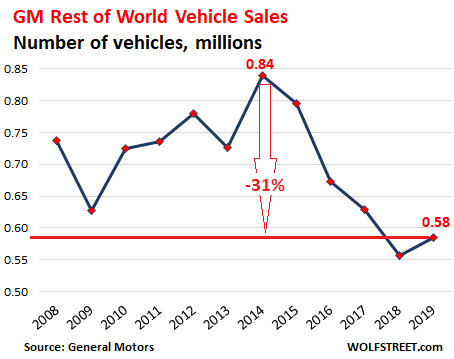 And so GM’s shrinkage continues. Shrinking yourself out of trouble looks good on paper, and shrinking per se is amazingly easy to do in a competitive world, and is in fact automatic if you’re not up to snuff. But it is fraught with existential risks, including the question: At what point do you stop shrinking before you hit zero?

And as GM is executing its next steps, either by plan or forced by the market, in that relentless shrinking process, it has yet to specify at which point it wants to stop shrinking before its sales hit zero.

Ever since Ford got sidetracked by its “Smart Mobility” dream and blew billions on it, sales in its biggest markets have spiraled down. Not just in the US and China. Here are the ugly charts by market. Read…  Ford Better Figure Out How to Sell Vehicles, And I Mean Globally & Pronto, Before it’s Too Late

151 comments for “GM Better Figure Out How to Stop Shrinking, I Mean Globally & Pronto, Before It’s Too Late”