Ever since it got sidetracked by its “Smart Mobility” dream and blew billions on it, sales in its biggest markets have spiraled down. Not just in the US and China. Here are the ugly charts by market.

In a moment, we’ll venture into the bitter reality and ugly charts of how the number of vehicles Ford sells in the US, China, Europe, Canada, Australia, South America, Russia, Turkey, and other markets has been dropping – or plunging – year after year to where its global sales are now down 19% from the peak in 2016, as Ford disclosed when it filed its Annual Report (Form 10-K) with the SEC on Wednesday.

But before we get there, here are some dead giveaways, some unintentionally funny, of how Ford got sidetracked by strategic misadventures into this whole realm of what it calls “Smart Mobility,” and how it got tangled up in its dreams, and thereby lost its way as a nuts-and-bolts automaker that should be focused on designing, manufacturing, marketing, and selling motor vehicles that consumers want. Instead, Ford tried to be something else.

Here is a quick rundown of select “Smart Mobility” misadventures during the period over which Ford’s vehicle sales have plunged by 19%:

Sep 2016: Ford’s newest and much ballyhooed initiative, “Ford Smart Mobility,” made its first acquisition, van-shuttle startup Chariot, that was trying to get folks in San Francisco interested in its van service. Ford expanded this service with a lot of hoopla to numerous other cities, and to other countries, and after having thrown enough dough at it, shut it down unceremoniously in January 2019.

Nov 2016: Ford (Ford Motor Credit) picked up a shut-down San Francisco startup, rebranded it Canvas, and made a go of a car-subscription service. Car subscription apps were becoming the latest Silicon Valley thing. Startups and other automakers were piling into it. It’s easy to put an app together. It’s tough to make money in the car-subscription business. In Sep 2019, Ford sold Canvas to Fair, a Softbank-backed car-subscription unicorn that has no intention of ever making any money. Financial details were not disclosed, but Ford ended up with an equity stake in the startup. Good luck.

Feb 2017: Ford announced that it would invest $1 billion over the next five years in artificial intelligence startup Argo AI to develop the “virtual driving system” for Ford’s autonomous vehicles that were supposed to be mass-produced by 2021. A lot of additional patience will be required.

Late 2017: Ford launched GoRide Health, a shuttle service to service skilled-nursing facilities and hospitals, transporting patients in wheelchairs, etc. So that’s a good cause, but a money-losing one. The company lost $288 million in Q1 2019, according to Ford, cited by Reuters at the time. Nevertheless, In May 2019, Ford announced grand plans to expand the service nationally. But in December 2019, Ford shut down the service.

Jan 2018: Ford acquired startups Autonomic (“transportation architecture and technology provider”) and TransLoc (“builds technology to support “microtransit” services, including, real-time tracking, demand modelling and response analysis, as well as consumer-facing mobile apps and services.”) Ford said at the time: “All of those components are important pieces of the puzzle for something like the Transportation Mobility Cloud, which Ford hopes will be adopted by partners including other automakers, public transit providers, and service operators including ride-hailing and ride sharing companies.”

Jan 2018: Ford announced that it would “realign” its misbegotten “Mobility Group.” One of the key initiatives was in ride sharing. It would make Chariot – yes, the now defunct Chariot – “the cornerstone of Ford’s microtransit solutions.”

Nov 2018: Still undeterred by reality, Ford Smart Mobility acquired San Francisco dockless electric-scooter-sharing startup “Spin.” It’s “a leading micro-mobility service provider, with operations in 13 cities and campuses across the US,” Ford said at the time. In July 2019, it announced that it would use bigger, sturdier, and less dangerous scooters that don’t instantly fall apart, but might last a few months, or something…

You get the drift. But actually selling automobiles is tough. 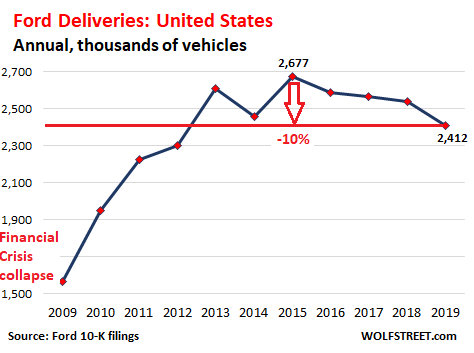 The European Union, Ford’s second largest market. Ford operates there with its subsidiary Ford of Europe, which has its own manufacturing plants and models. Ford of Europe sales peaked back in the day before the Financial Crisis. In 2008, Ford still sold 1.72 million vehicles in the EU. Sales collapsed by 37% through the Euro Debt Crisis to a low in 2013 of 1.08 million units, then rose again to 1.44 million units in 2018. And in 2019, sales fell 6.5% to 1.34 million vehicles, down 22% from 2008, a very hard-to-swallow long-term decline: 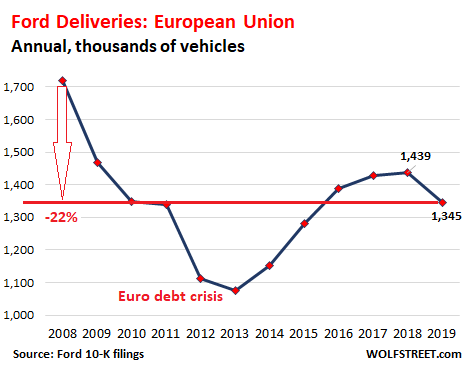 The China Fiasco: Ford’s sales in China, after booming, have collapsed 58% since the peak in 2016. Of note, the Chinese auto market was still booming in 2017, and didn’t start declining until the second half of 2018. In 2019, overall passenger vehicle sales in China were down 13% from the peak in 2017. So yes, it’s now a tough environment, but Ford got totally crushed in it: 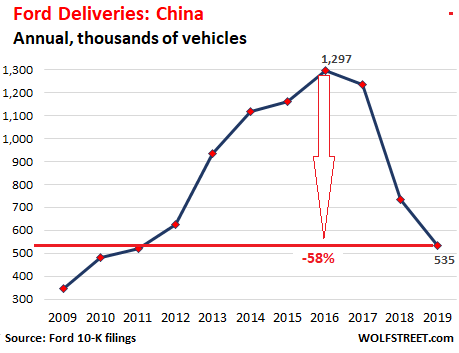 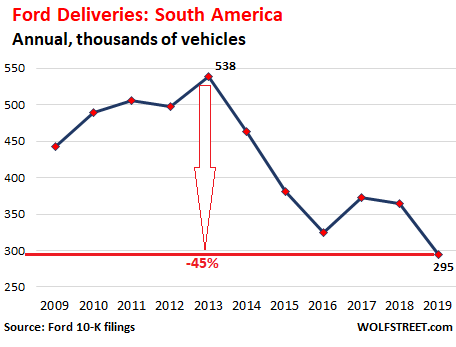 In Canada, where the overall market is down 6% from the peak in 2017, Ford’s sales fell 8% from their peak in 2015, to 289,000 vehicles. In terms of percentage-decline from peak, this is Ford’s least-worst-performing market: 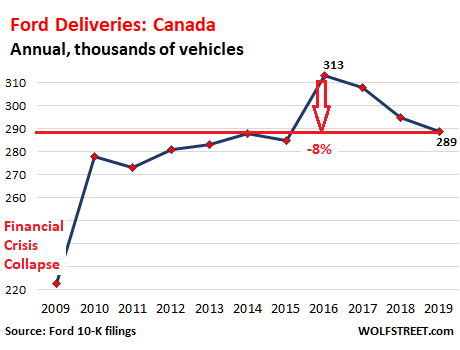 The Turkey and Russia Sales Collapse: While Ford is busy diddling with scooter-sharing services and other dreams, it shut down three assembly plants in Russia in 2019 that made passenger vehicles. It continues to operate a joint-venture plant that makes its Transit van. Auto sales have swooned in both markets, each for their own issues. Honda shut its manufacturing plant in Turkey in 2019. Ford also has factories in Turkey under the Ford Otosan brand but continues to operate them. Ford’s sales in both countries combined have collapsed by 72% since the peak in 2011: 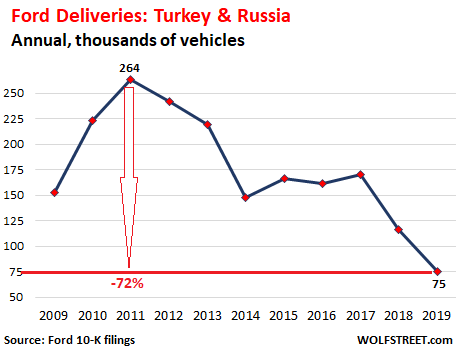 The Australia Fiasco: Ford’s sales in Australia collapsed by 38% since the peak in 2010. This came despite the boom in Australia’s auto market through 2017. Now it’s getting tough all around with total auto sales down 11% over the past two years, but Ford got crushed even during good times: 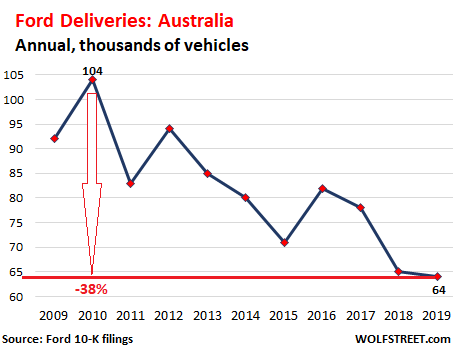 The Global Fiasco: In 2019, Ford’s global sales dropped 10% from 2018 and are now down 19% from the peak in 2016, as the company is busy trying to reinvent itself as a “Smart Mobility” tech company or something with scooter-sharing services and other money-losing dreams that have not been shut down just yet: 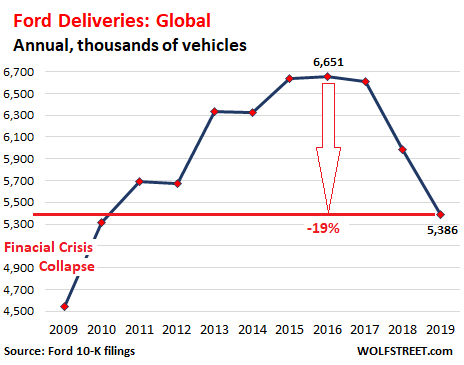 And as a reminder of the crazy thing that happened to Tesla’s stock, including the WTF stock chart of the year, and another WTF chart of just how tiny Tesla is compared to the top 10 automakers, including Ford. Read… I’m in Awe of How Tesla is Now a Supernatural Phenomenon

153 comments for “Ford Better Figure Out How to Sell Vehicles, And I Mean Globally & Pronto, Before it’s Too Late”