Sales fall for second year in a row, as car sales collapse further and truck sales barely tick up.

Sales of passenger cars and light trucks in Canada fell 3.7% to 1.91 million vehicles in 2019, the second year in a row of declines, and were down 6.1% from peak-year 2017, according to industry data compiled by Des Rosiers Automotive Consultants: 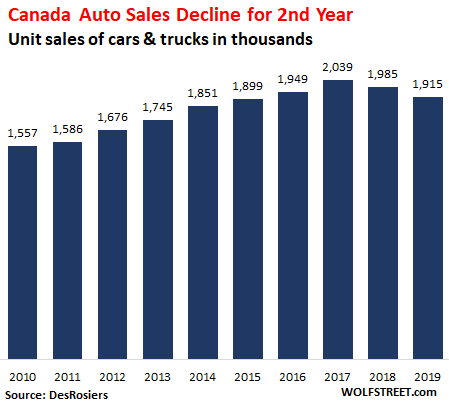 These sales are new vehicles that dealers delivered to their customers, or that automakers delivered directly to large fleets, such as rental car fleets. Leases are included as dealers sell these units to leasing companies which then lease them to the customer.

This chart of Carmageddon in Canada also shows how truck-sales growth has stalled over the past two years, as car sales have plunged; hence, the overall sales decline in those two years: 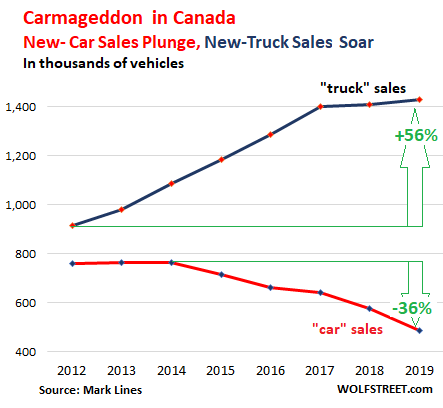 The dividing line between “cars” and “trucks” that the industry has been using since Adam and Eve is probably no longer relevant: Compact SUVs and subcompact SUVs, when they were established by the industry some years ago as categories, were classified as “trucks,” mostly for marketing reasons because it would allow automakers to charge higher prices for them.

But compact SUVs are based on a car chassis with a car powertrain and car components. They just sit a couple of inches higher off the ground than a car, and their roofline isn’t as low-slung as that of a car. These compact and subcompact SUVs are very popular, and the fact that they’re classified as “trucks” instead of “cars” is a big driving force behind Carmageddon.

Most mass-market brands (I define them as having a market share of at least 2%) experienced declining sales in 2019, except Toyota, Hyundai, and Kia.

Ford sales, according to estimates by Des Rosier (laggard Ford will announce its deliveries on Monday after everyone else announced their deliveries on Friday), dropped 3.4% to 287,900 units in 2019, which allowed Ford to hang on to its place in Canada, with a market share of 15%.

General Motors sales plunged 10.9% for the year, to 256,795 units, putting GM again in second place behind Ford, with a market share of 13%. The 2% uptick in Q4  deliveries, after the battering sales had taken in the prior quarters, caused the press release to crow, “We achieved solid year-end results in 2019,” while also noting that “Canadian consumer preferences shifted significantly toward crossovers, SUVs and pickups in 2019.” Namely Carmageddon.

The press release only pointed out the good stuff: Buick’s China-made compact SUV, the Envision, and the South Korean-made compact SUV Encore were hot, with sales rising 19.9% and 21.7% respectively in the fourth quarter. And GM’s pickup sales were hot too, with Chevrolet Silverado and GMC Sierra sales rising 10.9%.

FCA sales, in fifth place, inched down 0.8% in 2019, to 223,101 units, for a market share of 11.7%. Its Fiat and Alfa Romeo brands only sell a few hundred cars a year and don’t matter. FCA’s cars are being killed off methodically, visually reemphasized in its press release, which showed three photos: two of SUVs and one of a pickup.

A total mind-blower. Actual prices skyrocket even as CPI for new vehicles has been flat for 22 years. Read…  My “Pickup Truck Price Index” Crushes “CPI for New Vehicles”

114 comments for “Carmageddon Spreads to Canada”