Australia is next as we’re tracking the decline in global new-vehicle sales that started in the US in 2017 and took on serious dimensions in 2018 with vehicles sales falling for the first time in modern China, the largest auto market in the world.

New-vehicle sales in Australia fell 7.8% in 2019 to 1,062,867 units, the lowest since 2011, after having already fallen 3.0% in 2018, for a combined decline from the historic peak in 2017 of 10.8%. The sales declines in 2019 got worse all year, well before the horrific wildfires began. And December, when the wildfires were raging, new vehicle sales actually fell “only” 3.8% year-over-year. Soley blaming the wildfires would miss the target: 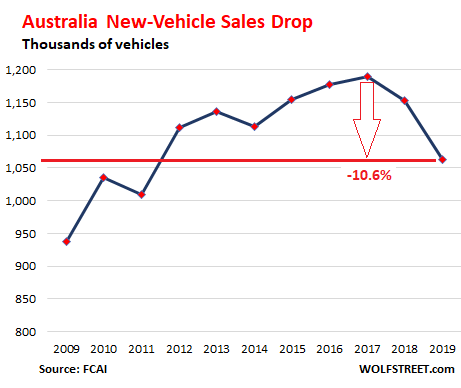 “2019 reflects a tough year for the Australian economy, with challenges including tightening of lending, movements in exchange rates, slow wages growth and, of course, the extreme environmental factors our country is experiencing,” the report by the Federal Chamber of Automotive Industries (FCAI) said.

By vehicle categories, according to auto industry portal Mark Lines:

The Toyota Hilux pickup – categorized as a “commercial vehicle” – was the number one best-selling vehicle with 47,649 sales. The Hilux is not sold in the US but is widely popular around the world. It’s built on a similar platform as the Tacoma in the US. But there are differences beyond styling.

The Hilux is somewhat more spartan, and thus a little more “commercial,” than the Tacoma which is marketed as a personal vehicle and is a little wider to give passengers more room. One of the big differences are the engine choices, which include two 4-cylinder turbo-diesels for the Hilux, true workhorses that are not available for the Tacoma.

Toyota’s Corolla was the third-best-selling vehicle with 30,468 units sold.

General Motors is represented by its Australian subsidiary Holden, which has fallen on hard times and ended vehicle and engine production in 2017 and now just imports vehicles. Holden was in 10th place, behind Kia (6th), Nissan (7th), Volkswagen (8th), and Honda (9th). For the year, Holden’s sales collapsed 29% to 43,176 units.

In the US, new vehicle sales in 2019 fell again, though a few automakers booked sales gains. Here are the vehicle charts for each of the top automakers. Read… US New Car & Truck Sales in 2019 Fell Below Year 2000 Level, 3rd Year in a Row Below 2016 Peak

In Canada, sales fall for second year in a row, as car sales collapsed further and truck sales barely ticked up. Read... Carmageddon Spreads to Canada