Amid a shakeout among trucking companies & production cuts and layoffs among truck makers.

“Fleets are being very cautious in this environment, only ordering what they know they need for the next few months,” FTR said in the statement. Stability at low levels, so to speak: 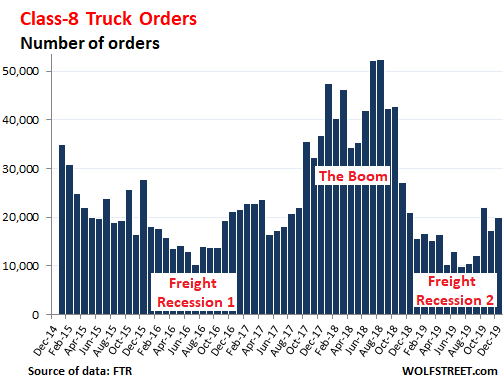 On a year-over-year basis, orders for Class 8 trucks in 2019 had collapsed by as much as 80%, following a historic boom in orders in 2018. The truck makers that receive these orders are Daimler’s divisions Freightliner and Western Star; Paccar’s [PCAR] divisions Peterbilt and Kenworth; Navistar International [NAV]; and Volvo Group’s divisions Mack Trucks and Volvo Trucks.

Truck makers have already begun adjusting to these new market conditions with production cuts and layoffs:

The chart below shows the year-over-year comparison for each month, which eliminates the effects of seasonality. The historic boom in orders from late 2017 through much of 2018 was triggered as truckers reacted to a boom in demand for transportation services triggered by companies across the spectrum wanting to front-run potential tariffs. By late 2018, the whole thing came unglued. Truckers slashed their orders to low levels, and orders have now stabilized at these low levels: 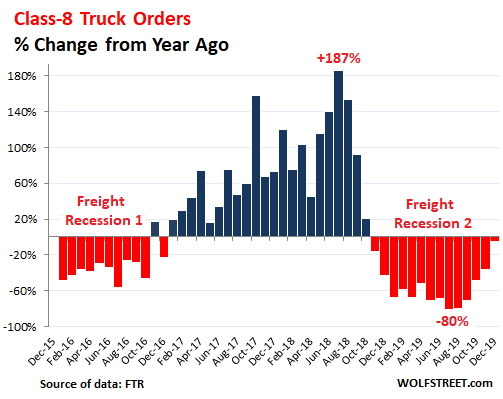 Last year, trucking company failures more than tripled to reach 800 shutdowns. Most of these were smaller trucking companies. But it also included regional carriers, such as New England Motor Freight which collapsed in February, and car-hauler Jack Cooper which shut down in August. And then in December, Celadon Group, a full-truckload operator with about 3,000 drivers and about 2,700 tractors, was felled by accounting fraud and the freight recession, the largest truckload-carrier bankruptcy in US History.

“The good fleets are making money, the weak fleets are leaving the industry,” is how FTR VP of commercial vehicles Don Ake explained the phenomenon.

“This is as balanced and stable as you are going to see in Class 8 ordering,” he said. “Fleets are ordering trucks according to their standard replacement cycles and also for normal delivery cycles. They are not speculating about the future direction of the freight market because there is too much uncertainty. This is a ‘wait and see’ approach.”

A heavy truck dealer who owns two stores with several franchises, and who has been doing this for a long time, had a less sanguine description: “On our lots, there are no lookers for used sleepers, and we will sell new sleepers at a loss to clear them out, and new orders for sleepers have come to a stop,” he said. Read… Turmoil in the Heavy-Truck Market as Seen by a Truck Dealer