“This, I think, was the Big One, where the fleet valuations fell out and took this company out.”

“On our lots, there are no lookers for used sleepers, and we will sell new sleepers at a loss to clear them out, and new orders for sleepers have come to a stop,” a heavy truck dealer who owns two stores with several franchises told me. The truck dealer was talking about the turmoil in the heavy-truck business, where orders for new Class-8 trucks have collapsed by as much as 80% year-over-year…

…and where the used-truck market is now being flooded by tractors from the nearly 800 trucking companies that have shut down this year, including Celadon Group, which announced on December 9 that it had filed for bankruptcy and would cease operations. It was the largest truckload carrier to file for bankruptcy in US history [here’s my take: Accounting Fraud & Freight Recession Topple Celadon, Largest Truckload-Carrier Bankruptcy in US History]. The company had about 2,700 tractors, some of which were being repossessed at truckstops and elsewhere by creditors even before the bankruptcy announcement.

“This, I think, was the Big One, where the fleet valuations fell out and took this company out,” said the truck dealer, who wishes to remain anonymous. “There will be other fleets to follow Celadon, as assets are valued in the months to come, and accountants get wise to their real book value as compared to market reality.”

And this is what the heavy-truck dealer then reported:

The Caledon issue, which I have watched for years, will drive the already depressed used tractor market down. When these units hit the market, they will find few interested dealers, looking to add equipment, to sit next to inventory that is already overaged or overvalued.

The dealer network as a whole did a very bad job paying attention to the demise of the tractor market.

Adding to the issues are units traded in over the past 90 days, or units that will be forced to trade in over the weeks to come when the new trucks will be delivered; these trade-in values were negotiated on the new-truck order dates 9 to 12 months ago, on contracts that were cut and prices leveled 9 to 12 months ago, with most having a “trade terms” condition but no evaluation setup for market changes.

These dealers – many of them have not been through the downturns I have seen – were rocking and rolling, void of the thought that the new and used-sleeper market would crash.

They now have these two-fold issues, where the used trucks have piled up next to the new, and they are taking sizable losses to just cut and dump trucks.

Most dealers this year stayed away from auctions on units, except for the “Dirty Construction Trucks,” which remain quite an active segment. Inverse to the past, you will see dealer units next to the Caledon units, at auctions to come; with dealers’ hands firmly planted in their pockets.

This situation has led several OEMs [truck manufacturers] to get back into the trade-in business, where they are offering to bring in values and take trades off dealers’ hands, on deals of all sizes, just to move new trucks. This will just kick the can down the street for later, when the used truck centers of the truck manufacturers will overflow, and then those units will be dumped.

In general, the matrix of the industry is changing and the manufacturers are slow to adapt to change, but are in uncharted territory on their own side as well.

I use Truckpaper as a gauge to current conditions; as an example, here are current counts, listed on their forum by category:

But the real numbers might be a lot higher. We have to enter about 25 fields, add photos, and then key in a narrative for every unit listed. You can’t list quantity, so most dealers with quantity will list 5 to 10 units out of lots, which have counts well above these numbers.  Factor in these details, and factor in dealers who don’t list at all, and one might make the case for the real number of units to be 30% to 70% higher.

Next will be the units dumped by the energy sector that is crashing fast. Their units will create problems. One might say they will be dumping “Dirty Trucks” too, but that is not the case. Most are custom-built for an oil-field job and can’t be brought to the rest of the country to find a second life.

One player is Custom Truck One Source, a division of Blackstone, that has gone into the business of being a secondary source of new trucks. They have cut deals with all of the OEMs, stocked up on over 2,400 units that are now aging. These units mounted with bodies and equipment are ready to go, but are finding few takers. 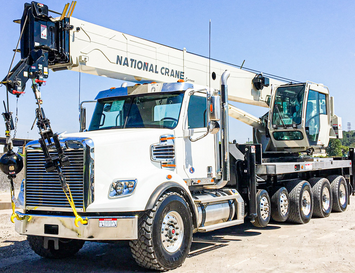 As a division of Blackstone, the cash at Custom Truck One Source has been free-flowing, though I suspect they are now feeling the heat as well. By Heavy-Truck Dealer.

Creditors trying to repossess trucks over the weekend; thousands of drivers on the road, some stranded; employees left in the dark; shares plunge 93% at the open, from nearly nothing to practically nothing. Read…  Accounting Fraud & Freight Recession Topple Celadon, Largest Truckload-Carrier Bankruptcy in US History