Paying the University-Corporate-Financial Complex and the big bifurcation.

Student-loan balances jumped by 5.1% in the third quarter compared to Q3 last year, or by $80 billion, to a new horrifying record of $1.64 trillion, having skyrocketed by 120% in the 10 years since Q3 2009, according to Federal Reserve data released Thursday afternoon. Over the same 10-year period, when student loans soared 120%, the Consumer Price Index has increased 19%. Student loan balances are 7.6% the size of GDP, up from 5.1% in 2009. 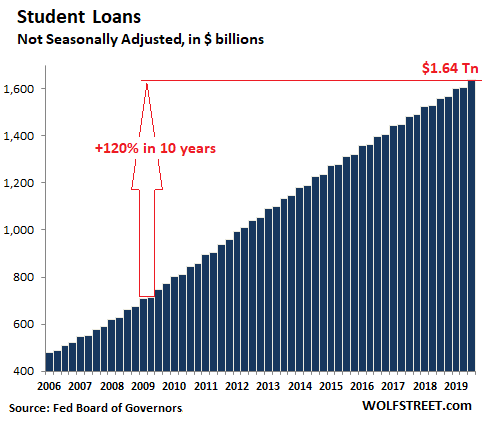 But the explosion of student debt is not because there is an explosion in enrollment in higher education. On the contrary: According to the latest data from the National Center for Education Statistics, enrollment fell by 7% between 2010 and 2017. But those fewer and fewer students are borrowing more and more to pay for tuition, transportation, electronic devices, and other things that the University-Corporate-Financial Complex gets rich off.

This includes “student housing,” which has become a hugely hyped asset class with its own student-housing Commercial Mortgage Backed Securities where delinquency rates are now spiking.

Everyone is trying to make money off the proceeds from these government-guaranteed loans. The students are just the money-conduit from the taxpayer to:

A whole sub-economy has sprung up to leech this money out of the educational process, and taxpayers, via student loans, are funding part of it – but not all of it. Students who work fund part of it. Parents fund part of it. Savings fund part of it. It’s a huge business. But the glaring part is the ballooning student debt.

Total auto loans and leases outstanding for new and used vehicles in the third quarter rose 4.3% from a year ago, by $50 billion, to a record of $1.19 trillion:

Over the past 10 years, since Q3 2009, auto loan balances have surged 62%, compared to the increase in the Consumer Price Index of 19% and population growth of 8%. So, on an inflation-adjusted per-capita basis, the burden of these loans has increased. In terms of the size of the overall economy, auto-loan balances have ticked up from 5.1% of GDP in 2009 to 5.6% of GDP currently.

Credit cards and other Revolving credit

Outstanding balances on credit cards and other revolving credit, such as personal lines of credit – but not credit secured by housing, such as HELOCs – rose 3.6% in Q3 compared to Q3 last year, to $1.04 trillion (not seasonally adjusted). This was a record for a third quarter, and was the second highest quarter ever, below only the borrow-till-you-drop holiday frenzy of Q4 last year.

But in overall terms, as a national average, consumers have been fairly prudent by American standards, compared to the era before the Great Recession, to the consternation of lenders that milks enormous profits from credit-card debt where interest rates can exceed 20%.

Over the past 11 years since Q3 2008, just before it all fell apart, credit card balances edged up only 5.8%. Over these 11 years, the Consumer Price Index rose 22% and the population grew about 9%. So adjusted for inflation and per-capita, consumers have shed credit card debt.

In terms of the size of the economy: In Q3 2008, revolving credit amounted to 6.8% of GDP. Today, it’s down to 4.8% of GDP. So, in terms of credit cards, consumers overall as a national average have become more prudent.

On one side are consumers who use their credit cards only as payment system and to get cash-back, miles, and whatever loyalty rewards, but they pay their cards off every month and carry no balances and pay no interest or fees. Since they have no interest-bearing credit card debt, their activities are not included in consumer credit.

On the other side are consumers with maxed-out credit cards or with large balances, and they have personal loans, payday loans, etc. They’re sitting ducks for the lending industry because they cannot pay off the loans but pay interest and fees out of their nose, wobble from paycheck to paycheck, and if something goes wrong, become delinquent. It’s these people who owe the lion’s share of that $1.04 trillion in revolving credit – which is why credit card debt sours so fast during a downturn.

Student loans, auto loans, and revolving credit combined into total consumer credit — which excludes housing related credit such as mortgages — jumped by $193 billion in Q3 from a year ago, or by 4.9%, to $4.13 trillion, another record:

That $193 billion increase in consumer debt over the past 12 months – whether from student loans, auto loans, or credit cards – was spent and boosted consumer spending (about $14.5 trillion) by 1.3%. And it boosted GDP by about 0.9%. That’s why economists want consumers to borrow-and-spend.

Students are an increasingly big part in this GDP-boost formula. That’s why economists and politicians don’t want to attack the problem where it really is: cracking down on the costs.

Instead, they’re trying to reshuffle as to who is paying for it – and it’s not the two beneficiaries of this process, namely the students getting an education and the University-Corporate-Financial Complex leeching off the process.

And they have found taxpayers who are owed this money. Broad student loan forgiveness is also utterly unfair to former students who paid off their loans and now would have to pay off the loans of other students; to parents who sacrificed a lot to fund their kids’ education and now would have to fund the education of other kids; and to many students themselves, who tried to avoid student debt, worked like maniacs and skimped on everything to pay their way through college, who went to the cheapest schools and stretched out their education, and who got less fancy jobs because of it, and now they would have to pay off the debt of other students that splurged on debt and might have ended up with better jobs.

The real problem that needs to be dealt with in terms of student loans is the cost of education – not who pays for it – and the costs are driven by the primary beneficiary of all this, the University-Corporate-Financial Complex.

UPDATE Nov 9: Dear readers, excellent comments and discussions below. You’re missing out if you don’t venture below the line. And you can chime in as well.