But consumers spent a record amount in Q3 on new vehicles due to record prices.

General Motors, Ford, and Fiat Chrysler reported third-quarter new-vehicle deliveries in the US on Wednesday, and Tesla followed with its global deliveries for the quarter on Wednesday evening. Because Tesla doesn’t report deliveries in the US, the industry is stuck with estimating them, and they have plunged in Q3 due to waning demand, and so Tesla is selling its Model 3 production overseas. Other auto makers are still on monthly reporting.

New-vehicle deliveries in the US — fleet and retail combined — were about flat, at 4.32 million vehicles in the third quarter. For the nine months, deliveries were down 1.6%. This puts new vehicle sales on track for about 17 million deliveries in 2019, the worst level since 2014, and below 2000 (17.35 million). This is the nature of a horribly mature market, whose two-decade stagnation was interrupted by the collapse during the Great Recession and the subsequent recovery: 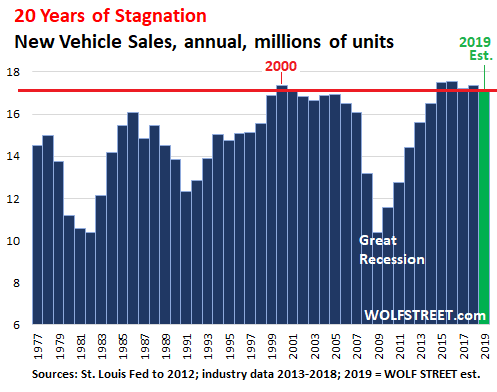 The auto industry in the US is a zero-sum game, at best, where growth by one automaker comes at the expense of others, and where dollar-sales increases for the industry can only happen by raising prices and selling more expensive products, and that’s what has been happening.

The table below shows deliveries by automaker. These are sales by dealers to their customers and include leases (dealer sells the vehicle to a leasing company which leases it to the customer) and fleet sales either by dealers or by the automakers directly to their large fleet customers, such as rental car companies: 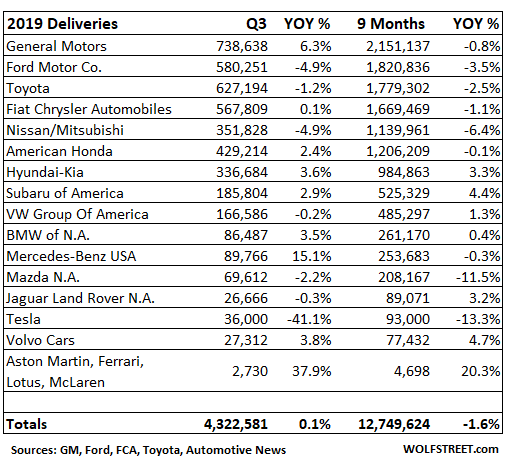 Fleet sales – mostly to rental car companies — accounted for 19.5% of total deliveries, about in line with the normal range, and down a tad from last year.

Pickups is where it’s at, powered by redesigned models. Deliveries of the Chevy Silverado surged 18% to 119,641 trucks, and deliveries of Silverado heavy-duty models rose 7.1% to 34,212 trucks. On the GMC side, Sierra deliveries jumped 29% to 66,198 trucks. Combined, these pickups accounted for 30% of total GM deliveries.

But “car” sales plunged 38%. This has been going on for years. All automakers are facing consumers that have lost their appetite for cars – at least for new cars, though they have the hots for much more affordable used cars. For years, I have called this shift “Carmageddon.”

But the category of “cars” does not include “crossovers,” which are counted as “trucks” for marketing reasons, though they’re based on car chassis and car drivetrains. They just look a little different. The fact that crossovers are not included in “cars” though they’re essentially cars renders the classic industry classifications of “cars” versus “trucks” useless.

Ford [F] reported that deliveries fell 4.9% in the third quarter compared to Q3 last year, to 580,251 vehicles, knocking Ford into third place behind GM and Toyota. Year-to-date, deliveries, at 1.82 million vehicles, are down 3.5% from a year ago, but remain in second place.

Sales of “cars” plunged 29.5% to just 77,231 units. The share of cars is now down to just 13% of Ford’s total vehicle sales. The only Ford branded car line – other than the minuscule-volume hand-built GT – that showed a sales gain, and a huge sales gain at that, was the most affordable vehicle Ford sells, the Fiesta, whose base version stickers for less than $15,000: Sales soared by 32% to 14,717. Fusion sales declined 1.1% to 37,557, Mustang sales dropped 12%, and the other models are moribund or already dead.

When Ford talks to Wall Street, it brags about raising prices and selling more expensive vehicles, even as overall sales are skidding, and as it is losing market share. It reported that its average transaction price (ATP) – the price customers pay after rebates and discounts – jumped by $2,200, or 6.2%, to $37,900 per vehicle at the end of September. But selling fewer and ever more expensive vehicles in a stagnating market and losing market share can eventually turn into an existential fiasco.

On the positive side, hybrid sales in the quarter soared 51%, powered by hybrid versions of the Corolla, RAV4, and Highlander. But sales of the Prius, once a hot-selling car and the most successful hybrid ever, plunged 27.1% year-to-date, to 50,258.

Sales of Toyota-branded cars fell 5.1% year-to-date and sales of Lexus cars fell 10.5%. But unlike Ford, GM, and Fiat Chrysler, sales of Toyota’s pickups – the Tundra and Tacoma – also fell (-0.9% for the year so far).

FCA [FCAU] switched from monthly reporting to quarterly reporting this quarter, following in the footsteps of GM and Ford. The brands include Chrysler, Dodge, Ram, Jeep, Fiat, Maserati, and Alfa Romeo. Total deliveries in the quarter were about flat compared to a year ago, at 567,809 vehicles. Year-to-date, sales fell 1.1% to 1.67 million units.

“Heavy-duty customers, including farmers, ranchers, construction workers and small business operators, have responded enthusiastically to the ability to do more work from their front seat during the day and take their families and clients to dinner in the same well-appointed truck in the evening,” it said.

This phenomenon – luxurious heavy-duty pickups, particularly crew cabs – is playing out at Ford and GM as well. These trucks are hot sellers, and very expensive, with speculation circling around which automaker would be the first to actually sell a crew cab for over $100,000.

Carmageddon for Tesla: Plunging US sales.

Tesla [TSLA] reported global deliveries of 97,000 units. Its sales efforts of the Model 3 are now focused on Europe. After pent-up demand in the US was met, Tesla laid off part of its US delivery team earlier this year. Tesla doesn’t report US sales, so the industry is guessing. Based on estimates by Automotive News, US sales of all models combined plunged 41% in the third quarter compared to a year ago, to just 36,000 vehicles, and fell 11% year-to-date to 93,000 vehicles.

Hopes Tesla would beat BMW or Mercedes, or come even close, have been rudely disrupted. In Q3, both sold about 150% more vehicles than Tesla. In addition to whatever other demand problems Tesla might face in the US — including an onslaught of reports of terrible service and unavailability of parts — it is also grappling with, like all automakers, the lack of appetite among Americans for “cars.”

Record incentives needed to get rid of 2019 models

In order to achieve flat unit sales in the quarter, automakers piled on the highest incentives for any third quarter, with the average incentive spending rising 6% from a year ago to $4,159 per unit sold, according to estimates by J.D. Power.

Dealers were sitting on large inventories of 2019 models, even as the 2020 models were piling up, and automakers used those record incentives to move those 2019 iron. J.D. Power estimates that 90% of all vehicles sold in the third quarter were 2019 models, making it the slowest, most dragged-out sell-down on record.

Flat volume and higher ATPs mean consumers forked over more moolah, which is what matters the most to the horribly mature industry where unit sales have been flat for two decades. J.D. Power estimates that consumers spend $121 billion on new vehicles in the third quarter, an all-time record. So it’s not like consumers stopped spending.

Classic cars took a big hit. “Expert sentiment is at its lowest point since October 2010, largely due to market observers’ reactions to the Monterey auctions.” Read... Asset Class of Vintage Cars Drops into Bear Market, Down by More than in 2008/2009