“Expert sentiment is at its lowest point since October 2010, largely due to market observers’ reactions to the Monterey auctions.”

The asset class of beautiful machines, which had already been struggling mightily, got whacked by the events in Monterey, California, last month. “Whether it’s threat of recession, broad economic volatility or too many cars crammed into too few hours, there’s no denying this year’s Monterey Auction Week results were depressed when you compare the results to recent years,” vintage-auto insurer Hagerty explained after the auction. The blow has now filtered into the monthly price index for vintage automobiles, the  Hagerty Market Index for September. 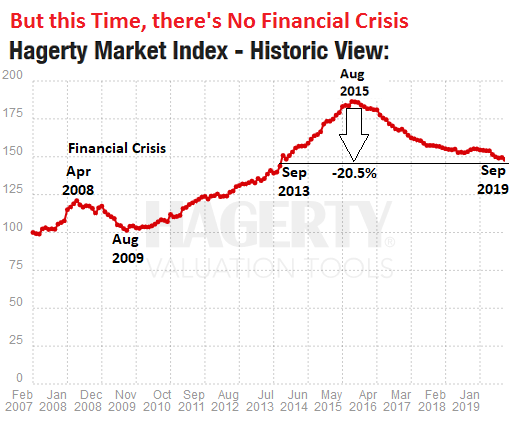 The Hagerty Market Index tracks prices of classic cars that sold at auctions and private sales, similar to a stock market index. But unlike the Dow Jones Industrial Average, the index is adjusted for inflation via the Consumer Price Index.

Total sales at the Monterey auctions in August 2019 plunged 34% from the total at the auctions a year earlier, to $246 million, the lowest total since 2011 ($197 million), according to Hagerty’s tally.

Of the cars that did sell, these three brought the highest prices:

But more importantly, here’s what did not sell:

The now infamous non-Porsche prototype that RM Sotheby billed as “1939 Porsche Type 64” and as “the most historically important Porsche ever publicly offered,” with a predicted selling price “in excess of $20 million,” and that the media then gushed over and called the first Porsche ever, though Porsche AG, which was founded a decade after this car hit the road, has steadfastly refused to claim it.

And maybe it should more appropriately be called a VW because it was based on the KdF-Wagen, as the VW Beetle was called at the beginning of its long history (image via Bloomberg): 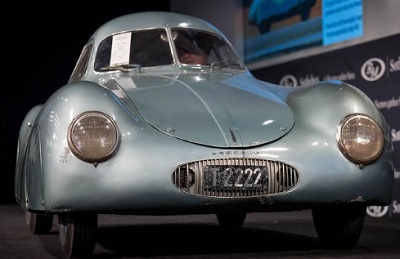 Alas, the vehicle had been heavily but unsuccessfully shopped for years at prices well below $20 million, according to Bloomberg’s post-mortem after the failed sale, and just about everyone among the small group of people interested in cars of this kind knew about it. Presumably, the idea of selling it at auction “in excess of $20 million,” after insiders had rejected it for less than that for years, was to find some clueless newly-minted Silicon Valley billionaire who’d buy it on impulse or something.

Whatever the motivation, the auction of this vehicle turned into a spectacular farce, when the price on the screen jumped to $40 million and to $50 million and to $60 million and then to $70 million, at which point the whole charade blew up, because in fact the actual top bid was only $17 million, after which everything collapsed.

But it wasn’t the only headliner car that failed to sell in Monterey. Among them were these two standouts:

In terms of “performance against estimates,” the average high bid was 16% below the low estimate, compared to being 10% below a year ago.

“Struggling headliner cars had the biggest impact on declining overall totals,” Hagerty reported. The sell-through ratio for these automobiles that price at over $1 million and at over $10 million plunged from 56% at the Monterey auctions last year to 42% this year.

This data is “signaling a slumping market,” Hagerty observes.

It has been tough all year in this market. For the first seven months this year – so not including the Monterey auctions in August – cars that priced at over $1 million and over $10 million had a sell-through ratio of 55%, and for those cars that did sell in these two categories, the average price dropped 19.4%, from $3.6 million in 2018 to $2.9 million in 2019.

This mood has been captured by the separate Hagerty Market Rating index for September, which fell to 62.93, the lowest since May 2012. This index attempts to rate the market and indicate the “heat” of the market. It includes weighted averages of median and average prices, auction activity, expert sentiment, Hagerty Price Guide indices, private sales activity, insured values for the broad market, insured values for the high end, and correlated instruments (methodology): 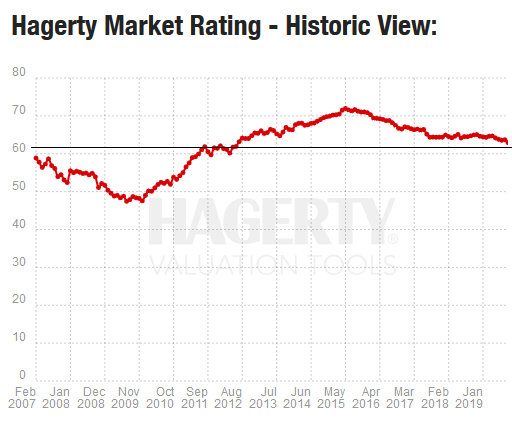 “The number of mainstream and high-end vehicle owners who think that values are growing has been trending downward for more than a year, and for September both numbers are at their lowest points since they were first included in the Market Rating at the end of 2009.”

“The expert sentiment section of the rating is at its lowest point since October 2010, largely due to market observers’ reactions to the Monterey auctions.”

This may be a bummer for investors in this asset class. But the beautiful machines, even if they’re increasingly tough to sell, even at lower prices, retain their visceral appeal.

The used-vehicle wholesale auction price index hit a new record in after the longest series of year-over-year price gains since 2001. Read…  Used-Car Market Profits from Carmageddon. For Many Americans, New Cars Cost Too Much