“Fleets are nervous. The latest manufacturing and construction numbers are concerning. The trade issue with China looms.”

Layoff decisions by heavy-truck manufacturers are trickling out. A couple of days ago, it was Daimler-owned Freightliner, which said in a statement to WBTV that it would “adjust its production output in line with lower market demand and release approximately 450 production workers [out of 2,878 employees] at its Cleveland manufacturing plant based in Cleveland, North Carolina, and approximately 450 workers [out of 1,714 employees] in Mt. Holly, North Carolina, effective October 14, 2019.” These layoffs represent 16% and 26% of the workforce at the respective plants.

Orders for heavy trucks, after a red-hot period that ended in the fall of 2018, have been in a horrific plunge. In September 2019 compared to September last year, truck makers received about 12,100 orders for Class-8 trucks, down 71% from a year ago, according to preliminary estimates by FTR Transportation Intelligence. It was the 11th month in a row of year-over-year declines, including July and August plunges of 80%: 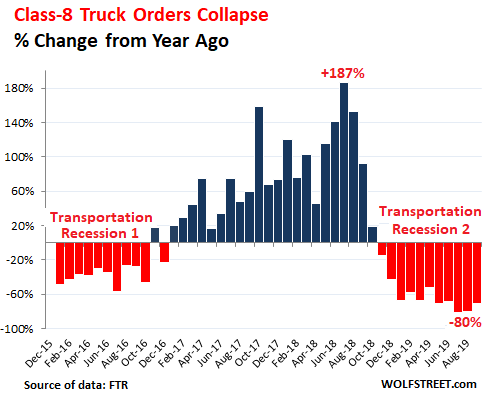 “Fleets are moving around, or canceling orders previously placed but are not ordering many new trucks for Q4 delivery,” FTR said in the statement. “Carriers have not begun ordering for 2020 requirements yet, due to the tariffs and the economic uncertainty.”

Class-8 orders “are stuck at the bottom of the cycle,” said FTR vice president, commercial vehicles, Don Ake, adding: “Fleets are nervous. Freight growth continues to ease back. The latest manufacturing and construction numbers are concerning. The trade issue with China looms. In this environment, fleets see no reason to begin ordering for 2020 until Q4.”

The shipment boom in 2017 and 2018, as a result of front-running potential tariffs, triggered rumors of a “capacity crisis” among trucking companies, which then engaged in a historic ordering boom in 2018 to expand their capacity to be able to handle the shipment boom. But then in late 2018, overall freight shipments in the US suddenly began to fall, and have fallen ever since, and it was over.

The chart shows this boom in orders for Class-8 trucks and then the sharp drop-off in orders down to historically low levels where they appear to have gotten “stuck”: 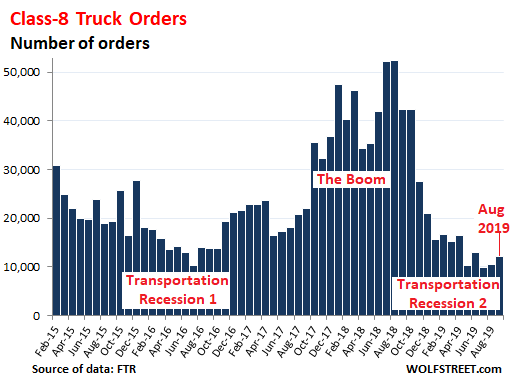 As a result of the historic ordering boom in 2018, truck makers accumulated an equally historic backlog for building 2019 models, and the subsequent collapse in orders that started late last year was buffered by this backlog, and truck deliveries hit record highs months after orders had begun to collapse.

Truck makers recognize a sale when the truck is delivered to the customer, which is months after the truck was ordered. For the industry overall, truck sales, as measured in deliveries, surged during 2018 and into 2019, to hit 47,300 deliveries in July (seasonally adjusted), surpassing the peak before the Financial Crisis, according to data by the  Commerce Department.

But in August, deliveries fell, and in September deliveries fell again, to 41,800 (seasonally adjusted), down 4.6% from September last year, the first year-over-year decline since the March 2017. These deliveries are still all 2019 models for which orders closed some time ago: 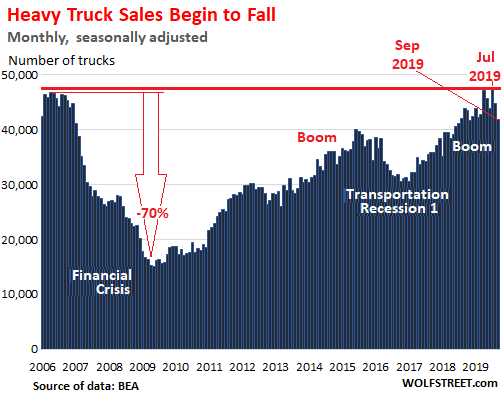 Truck makers don’t disclose their order backlogs. But when production cuts and layoffs start, it’s safe to assume that much of the order backlog has been built and delivered. Now deliveries are declining, and the layoffs are starting.

This is likely what is happening at Freightliner, where layoffs are set to begin on October 14. The company said in its statement to WBTV, referring to the order boom last year, and its untimely end:

What’s next for truck makers? Note Freightliner’s description of “normalized demand.” This is probably an accurate description of a market that had been totally distorted by the tariff-frontrunning boom, and now struggles with the harsh return to “normal.” The cyclicality of this industry is legendary, but even for this cyclical industry, the ordering boom in 2018 and the current order collapse is extreme.

As the backlog dwindles further, there will be further production cuts and layoffs until capacity is roughly in line with incoming demand for trucks.

The level of orders over the past five months in the 10,000 to 13,000-unit range is catastrophically low – about half of the industry capacity – and is likely a counter-reaction to the boom. At some point, the excesses will be worked off, and this catastrophically low level of orders will tick higher. But the cloud 9 that truck makers had been on until summer this year will likely not return anytime soon.

What US Freight Shipments and Pricing Say About the Slowdown. Read…  Light at End of Tunnel or Oncoming Train for the Goods-Based Economy?